Jerky has always been thought of as the ultimate gas station snack. But recently, with the rise in popularity of high-in-protein snacks, jerky seems to be available everywhere. 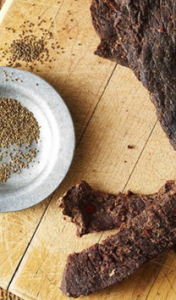 Today, there are many American companies that make jerky, with combined annual sales totaling more than $1.5 billion. A recent newcomer to the domestic market is Chef’s Cut Real Jerky Co., who’s CEO, Bart Silvestro, recounts its founding by a former executive chef and a semi-pro golfer: “They met on the golf course in Naples, Florida in 2008,” he begins. “After dealing with some health issues, Chef Blair Swiler decided to leave his corporate chef’s job and move to Naples with his wife where he began to caddy. While he was caddying, he met Dennis Riedel, another caddy, who was trying to qualify for the PGA tour, at the time.”

Blair had grown up making jerky with his father, and had once lived five minutes down the road from a Jack Links Beef Jerky plant, an American snack company with facilities across the Midwest. “He made his own jerky for his friends and family to enjoy and continued to make it and share it with his friends on the golf course in Naples,” Silvestro continues. “It became a big hit, and Dennis badgered him to do something with it to make some money. It took a while; he didn’t want to share the recipe, and, like most chefs, he wasn’t in the business for the money – they cook as a labor of love. But Dennis convinced him and they started making jerky in the basement of a catering kitchen at the Bayonne Country Club in Bayonne, New Jersey. They started selling the jerky in Bayonne, and then at Calusa Pines Golf Course in Naples.”

Some members at Calusa Pines, who loved the product, either loaned the pair funds, or made a monetary investment, so that they could purchase the proper cooking equipment to make jerky on a larger scale. “From 2009 to 2013, they sold their product in Ziploc bags on golf courses around the country, as well as some online commerce,” Silvestro reports. In 2013, a gentleman by the name of Rohan Oza, a serial entrepreneur who was one of the early investors in Vitaminwater, Pop Chips, and Vita Coco, met them after tasting the jerky on the golf course, and was surprised to find out that the jerky makers were not members of the country club, but were, in fact, caddies. After the meeting, Oza became the third partner in the business and, in 2014, after some rebranding of the packaging and a little refinement of recipes, the trio took the product to the retail marketplace. “And the business has been on fire since then,” Silvestro adds.

Silvestro joined the team in 2014, and admits that when he joined, jerky was not his favorite snack. “I did not like jerky,” he admits. “But I loved the story and thought the product was phenomenal. Growing up in New York, we knew jerky as ‘Slim Jim.’ It was break-your-teeth hard. When I tasted this product, it was tender, it was easy to eat, it tasted great, and it struck my interest, especially with my background in the snack world. So, I was eager to become part of this organization.” 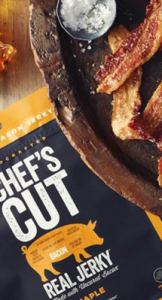 York City. It has 24 full-time employees – 12 based in New York and 12 sales and marketing employees spread out across the country. Since 2011, the company has sold more than 15 million bags of jerky, with one million of those sold on golf courses. In 2017, the brand had retail sales of almost $100 million, and its products can be found in most major grocery outlets and convenience stores across America. “You can pretty much find us everywhere,” Silvestro says. The company now offers an extensive line of products, including hand-crafted steak, chicken, turkey and pork jerkies, Snack Sticks, Meat Bars and Protein Snack Packs.

“The landscape has completely changed,” Silvestro avers. “Jerky is now considered a great, lean source of protein that people can incorporate into their diets. So, we’re launching a new product called a Protein Snack Pack. Envision a Dole Fruit Cup-like container, split down the middle and divided into two compartments. On one side, you have one of our tender jerkies, either teriyaki turkey or original beef, and on the other side you have 100 percent, all natural cheese crisps, which have been dehydrated using a proprietary process. It’s an on-the-go pack that’s shelf-stable. You can throw it in your backpack, suitcase, or briefcase and have a great, healthy snack with about 13 or 14 grams of protein.”

In a crowded marketplace, Silvestro believes that Chef’s Cut has some clear advantages. “There are attributes of our product that make us superior to what’s out there today,” he states. “First and foremost, we’re gluten-free, nitrite-free, and MSG-free. We’re lower in sugar and sodium than most of the jerkies on the market. So, there’s definitely a difference, and you can taste it as soon as you put it in your mouth. Jerky has always been like eating shoe leather or chewing on your belt. Our jerky is much different. We use USDA-certified choice or prime beef, the same type of sirloin that you would buy in the supermarket or have in a steakhouse. Our meat is never frozen, is slow-smoked using our proprietary smoking process, and our marinades are crafted by Chef Blair Swiler, himself. The result is a perfectly tender, flavor-packed jerky that is superior to other jerky brands out on the market today. Our goal has, and always will be, to deliver a chef-crafted, high in protein snack that our consumers can take anywhere.”

Silvestro adds that the two original founders are still involved with the company. Riedel works on special projects and sales. “Our origin is the golf course, and we have close to a thousand golf courses that buy from us on a weekly basis,” he relates, “so he helps to manage that piece of the business. And Chef Swiler is still involved; he’s one of the heads of our R&D department, still making formulations and still coming up with new products as we continue to grow. Everything we do is based on a chef’s experience. Having a chef behind the brand allows us to innovate differently than most of the other companies. We don’t create in a commercial kitchen with formulation experts and food scientists – we’re using a chef. And when you have a love of food and create things that people enjoy, there’s a lot that can happen.”

What Silvestro hopes will happen is that Chef’s Cut becomes the number three or number two brand of jerky, going forward. “What we look to do is change people’s perception and experience,” he declares. “The long-term objective is to become more prevalent in the jerky category. We want to deliver a chef’s experience at the same price point that you’re going to spend on another snack. It’s premium in quality – not premium in price.” 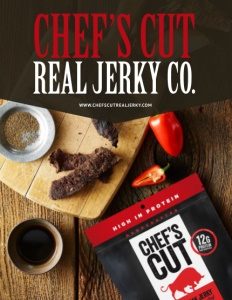