PNC Field is a Minor League Baseball stadium located in Moosic, Pennsylvania that serves the Scranton/Wilkes-Barre metropolitan area. “Formerly known as Lackawanna County Stadium, PNC Field was built in 1989,” states Josh Olerud, Chief Operating Officer and Team President of the Scranton/Wilkes-Barre RailRiders, the Triple-A affiliate of the New York Yankees. “Minor League Baseball moved to northeastern Pennsylvania with the Philadelphia Phillies for the 1989 season and we were a Philadelphia affiliate until 2006,” Olerud added. “Then, in 2007, the Yankees came to town.” That same year, Lackawanna County also sold the naming rights to its stadium to PNC Bank. 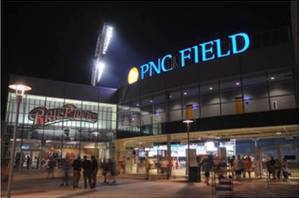 Since its initial construction, PNC Field, originally an artificial turf-surfaced stadium, has been used for a variety of events. It has hosted Minor League Baseball, regional band competitions, ice skating, car shows, flea markets, as well as high school and college sports. Today, in addition to 70 RailRiders home games, it hosts an additional 150 events annually, including all of the above, plus concerts, charitable walks, and surprisingly, weddings. “As the word has spread to wedding planners and photographers, they’ve found out that it’s a beautiful setting,” Olerud says, “especially in the fall when the leaves have changed in the mountains.  Our club level holds about 300 people, so it has the advantage of the stunning view coupled with the luxury of our suite level. It really has everything to make an ideal wedding or reception.”

Luxury was not always an amenity at PNC Field. “We had a typical 1980’s cookie-cutter stadium,” Olerud recounts. “Things started to change in the ‘90’s when multi-purpose facilities and fan amenities became a necessity. In 2010, we put together a plan to give the stadium a facelift. The plan was, basically, to knock it down and reassemble it.” The $43.3 million renovation project began on April 27, 2012 with the removal of upper deck seats and the stadium’s dark, dingy concourses. Outside of the field and the lower seating bowl, very little actually remains from the old park.

“We went on the road for the entire 2012 season and reopened PNC Field in 2013,” Olerud continues, “where we’ve been ever since. Along the way, we added every amenity that all of the new-age, minor league stadiums currently have. It’s been completely modernized to become a premier venue in northeastern Pennsylvania. It was the 2013 Baseball Digest’s American Stadium of the Year. We hosted the 2017 Triple-A National Championship Game, which is the pinnacle of events at this level. It was nationally televised on NBC Sports.”

Seating capacity at PNC Field is approximately 10,000. Olerud explains, “There are7,200 fixed seats in the bowl level, 270 club seats, 18 luxury suites that hold up to 16 people each, two party decks – one accommodates 60 and one that maxes out at about 80, so we have roughly 750 in the second level. We also have the Budweiser Railhouse in right field that seats roughly 200. We have the Kost Pavilion in left field that sits 500, and we have a grass berm in right-center that holds up to about 2,000. In 2018, we will be building an additional hospitality area in left-center field, which will give us the capacity for another 275 people.”

In addition to increased capacity (and increased 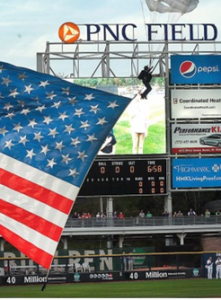 luxury), Olerud states that the stadium has also kept pace with the rapid changes in technology. “There was a lot of infrastructure built-in during the renovation that allows us to adapt to the times,” he explains. “The ability to run conduit and fiber, in addition to the WiFi capabilities that we have here, are second-to-none. We have a 150 by eight foot digital wall in right field, a massive video board in left-center, ribbon video boards above the first and third base balconies, and digital boards in the front of the ballpark. All of those things help make PNC Field as tech savvy as any Major League ballpark.”

Keeping pace with sustainable practices is also on Olerud’s agenda: “When the ballpark was built, there weren’t a great deal of green initiatives put in place. Now, our operations team is constantly in research of how things can be better. We recycle all of our plastics and paper, plus we are doing fewer paper programs and more informative emails. We are driving people to our mobile application to get information, even while a game is going on. We put in LED lighting into our parking lot in 2015, which was the beginning of the process to integrate LED lighting into the rest of ballpark as we move forward.”

In the future, the plan is to continue to book more events, while building more fan amenities, both technical and social. “On the technical side, our goal is to look for different ways for our fans to be interactive during the game, even to the point of ordering and receiving food by just using a mobile app,” Olerud says. “Our fans are trending towards group outings in social settings. That’s one reason why we’re building that left-centerfield hospitality area. I think that the social hot zones that we have will continue to grow. I think it keeps Millennials in the ballpark and it keeps parents happy because their kids can have a fun time at the stadium. Our attendance grew six percent this last year and eleven percent the year before, and typically, revenue grows along with it.”

Hopefully, the RailRiders will continue their winning ways on the field as well. “We won our division the previous three years,” Olerud reported. “We won the Triple-A National Championship in 2016. Last season, we had the second best record across Triple-A baseball.  We had a pretty good year, but we lost in the International League finals. The talent’s been great and it doesn’t hurt being part of the Yankees youth movement. A lot of guys here are the superstars that you’ll be seeing in New York soon.” 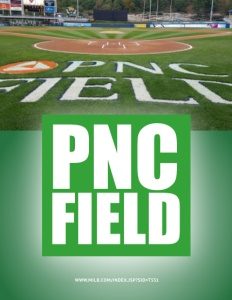