A Progressive Miner of Gold

Dundee Precious Metals, Inc. (DPM) is a Canadian-based, international mining company engaged in the acquisition, exploration, development, mining, and processing of precious metal properties. The company was formed in the early 1980s as a closed-end, resource investment fund, with interests in gold and other precious metal resource companies. “It ran that way for almost 20 years,” says DPM’s President and CEO, Rick Howes. “The fund was closed in 2003, when the company decided to convert to an operating gold and precious metal mining company.”

That year, Dundee Precious Metals acquired two gold assets in Bulgaria: Chelopech, which is a gold, copper, and silver mine located east of Sofia; and Krumovgrad, an open pit gold project that recently started construction and is scheduled to go into production late next year. Another one of the company’s acquired assets was a complex copper concentrate smelting operation in Tsumeb, Namibia. “We produce about 45 percent of our revenues from gold,” says Howes. “About 35 percent comes from our copper toll smelting business in Africa, and 20 percent comes from copper and other metals.”

The Chelopech mine was first excavated in 1954 and since then has produced approximately 19.7 million metric tons of ore. Over the last decades, it has changed owners, and gone in and out of operation several times. Since acquiring it in 2003, Dundee Precious Metals has invested close to 90 percent of its profits to transform the mine from an undercapitalized operation into a modern and viable one that meets international standards for worker safety, environmental protection, and sustainable development.

The project site in the town of Krumovgrad in southeastern Bulgaria will be a new open pit gold mining operation comprised of a process plant, which will employ conventional crushing, grinding, and flotation processing for gold extraction, and the disposal of thickened tailings, together with mine rock waste, in an integrated mine waste facility (IMWF). “The investment is about $180 million and it will produce gold in the order of about 100,000 ounces a year,” says Howes.

The complex copper concentrate smelter in Namibia was constructed in the early 1960s to process concentrate from the Tsumeb copper mine and other mines in the country. It recently underwent a $369 million expansion and today, its copper concentrate comes from both the DPM mine in Chelopech and others’ mines in Peru, Chile, and Namibia. Its products include partly purified, blistered copper and sulphuric acid. The blister copper is delivered to refineries in Europe and Asia for final processing to copper metal, and the concentrated sulphuric acid is sold to uranium and copper production businesses.

In addition to its current operation, Howes says that Dundee Precious Metals’s exploration group is always searching for new mining opportunities. “We’re particularly active in our Eastern European area where our base of operations is,” says Howes. “We currently have several exploration projects in Serbia and a number of brownfield exploration projects in and around existing mines in Bulgaria and Armenia. And we’re doing some work in other regions around the world. We also have a corporate development team that looks at possible acquisition opportunities, globally, to continue to grow the business.” DPM has approximately 2,000 employees, worldwide.

According to Howes, the company’s success is based on several factors. One has been its ability in getting its projects permitted and approved by the national governments, and supported by the local populations, in a region of Eastern Europe that had not traditionally been welcoming to western mining companies. “The challenge in the mining industry is maintaining our social license to operate,” Howes states. “We’ve been very successful in terms of our approach to working with the governments and local communities to create value in the regions where we build and operate mines – that’s one of our key strategies.”

Another key is the company’s best practices operating model which comprises innovation, sustainability, and efficiency, resulting in low operating costs. Regarding its innovative techniques, DPM is an industry leader in applying modern digital technologies to more efficiently run its operations. “We were the first to create a fully digital mine at our mine in Bulgaria, using underground WiFi technology and connectivity to operate our facilities with real-time capability to manage that operation,” Howes declares.

“The industry went through mechanization over the last 25 years, but was not really, fully automated like the car manufacturing industry, for example,” he adds. “Now the mining industry is seeing the opportunity to make that move as well over the next few years. We’re on the cusp of another major, transformational shift in the mining industry because the advancements of digital technologies – automation, robotics, and a whole slew of opportunities – now present themselves. We intend to be leaders and fast movers in that area.”

Dundee Precious Metals’s sustainability practices also raise the industry bar. “The mining industry in general has to be a responsible citizen in terms of the carbon footprint and its contributions to a sustainable world,” Howes claims. “So, we are very focused on that in terms of energy efficiency, greenhouse gas reduction, and water management – reducing the use of water resources in our operations and minimizing the carbon footprint of our operations, globally.”

Over the next several years, Howes says that the company’s goal is to continue its drive towards low-cost growth in the business, plowing as many profits as possible back into operations and expansion. “It’s a capital intensive business,” he states. “The mines tend not to be renewable. So in order to either grow or sustain our operations, we need large capital investments. Our capital comes from capital and private equity markets and our operating cash flows. Efficient operations generate margins that provide cash to reinvest to sustain the business or to grow it.”

When asked about competition in the mining sector, Howes explains: “Competition in our business is a little different than many other businesses because we’re price-takers in terms of the global commodities world. We produce commodities in the form of gold, silver, and copper, and those are driven by the market – by global supply and demand. So, we don’t really, formally, compete with any one special group. Where we compete is in being cost effective. We do the best in terms of surviving through the cyclical commodity price environment that the mining industry faces. So, there’s really not a competitor, per se; the competition, really, is to be the lowest cost producer and most effective in the use of capital.”

Howes then envisions Dundee Precious Metals’s plans for the future: “We’ll be a leading, mid-tier gold producer; probably one of the lowest cost gold producers using innovation and our strategy of leveraging the technologies that are coming on-stream to run more efficient operations and drive our business margins up. We’re currently looking at doubling our production with the addition of the Krumovgrad project in southern Bulgaria, and beyond that, we want to double again within a five-year period. And we want to maintain leadership in a sustainable mining approach that gets the support of governments and local communities; to be the employer of choice in building new mines in regions all over the world.”

Check out this handpicked feature on The Acterra Group – Total energy services.

WHAT: A Canadian-based, international mining company

WHERE: Headquarters in Toronto, Canada 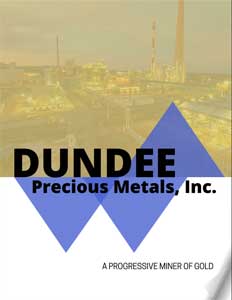