Cooper also remembers that his grandfather was very set in how he wanted to do business. “He didn’t like diversification; he liked to do what he knew,” he says. “Or so, I’ve heard from my father.” Cooper’s father followed his father into the business in the early 1960s, and took it over in 1976, after the founder died. “My father was very entrepreneurial, and figured out, early on, that diversification was important,” Cooper adds. “So, every time he saw an opportunity, he formed another business and went after it.”

Today, the Acterra Group is a diversified company that operates four divisions. “We’ve got the petroleum equipment division, which is the heart of the business and always has been,” says Cooper. “And that is anything that has to do with fuel equipment – above ground, underground, installing it, distributing it, selling it, servicing it. It could be a pump at the island of a convenience store, or it could be a tank for a fleet for a government operation – anything like that.”

“Then we’re also fuel tank manufacturers,” he continues. “We have a manufacturing facility here in Iowa where we manufacture above ground and underground steel tanks. We also have an electrical division where we do industrial electrical work, plus we do some renewable energy work. Finally, we’ve got a federal services division that only works on DOD (Department of Defense) and Air Force facilities, mainly in the fueling business.”

Acterra has about 60 employees; its customers range across the Midwest from Denver to Chicago. “We’ve got offices in Denver, Des Moines and Cedar Rapids, Iowa, and satellite offices – one in Texas, one in Chicago, one in Sioux City, Iowa.” Cooper reports that, in addition to actively marketing its services via direct sales, digital marketing, and trade shows, the company also maintains long-term relationships with major general contractors who have five-year federal maintenance contracts. “That’s one of our biggest customers,” he declares. “And the federal services division has actually increased this year; it will probably be about 30 percent of our business; the electrical will be about 10 percent; the manufacturing will be 20 percent; and fuel equipment will be the rest.”

Over the years, Acterra has grown both organically and by some small acquisitions. It has also continued to diversify: currently, it is spinning off one business, starting another, and expanding its territory. “We’re moving into the asphalt storage market,” says Cooper. “We build and supply asphalt storage tanks and sell a variety of heating and storage systems. We’ve done that, here and there, over the past few years, but now we’re turning that into its own business.

“And we just became the national distributor for a small wind turbine manufacturer from Germany that’s trying to push into the United States. They’re owned by a company called Lely – a large dairy manufacturer. My guys are going to Germany for initial training so we can enter the marketplace in March.

“And federal services is expanding our footprint for us. We just started a project in Canton, Ohio. We’re teaming with a company out of Hawaii that has a contract with the Army Corps of Engineers. That same company is bidding on multiple projects across the country, including one in the Pacific, so it might change our footprint, considerably.”

One of Cooper’s challenges, and one that he shares, these days, with many companies in many sectors, is finding enough skilled workers – especially in a rapidly changing business environment. “Most of the time, I can’t find a person in areas that we’re in that has ten years’ experience doing what we do,” he laments. “The business of working on a gasoline pump, today, is significantly different than it was 20 years ago because that same technician, today, is not just working on the fuel-related equipment – he’s also a network engineer; he’s working on networking systems that are connected to point of sale systems that are all connected to the internet. Then you add being out in the field, in the cold, in the dead of night, trying to get a fuel sensor to talk to a point of sale system out in the middle of nowhere. That’s a difficult person to find. We have them, but we need more. So, training is a never-ending situation. There’s always a new product to train on; there’s always a new certification to get.”

Over the long term, Cooper says that the plan, going forward, calls for his brother, Terry, who is the company CEO, to move out of the business’s operations in the next year or two and focus mainly on acquisitions and capital. “And, in my five-year plan, we’re looking at growth opportunities through acquisitions for some of these new markets we can get into,” he avers.

Meanwhile, Cooper affirms that the Acterra Group will continue to take care of its customers, as well as its workers. “We’re a small, family business and we try to take care of our employees,” he states. “My father was always adamant that the people who worked here were his extended family, and so, my brother and I have tried to take that same attitude. We are very proud to be entering our 60th year of business, and our success has been due to the great staff we have had over all of these years.

“And we’re customer driven. Why do my customers stay with me? Service – that’s the most important thing; to keep their operations up and running. If our equipment is down, we need to make sure it’s maintained. We know that in the fuel business, if they’re not pumping fuel they’re not happy. So, we try very hard to keep repeat customers happy.”

Check out this handpicked feature on Revelation Real Estate – #RevelationDomination.

WHO: The Acterra Group

WHAT: A multi-faceted, energy services and consulting company 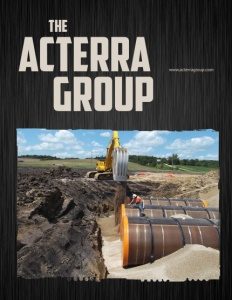