KMC Controls – In the forefront of change

KMC Controls of New Paris, Indiana, is an independent, American manufacturer of building automation solutions that always has been in the forefront of change. The company was originally founded in 1969 by Ken Kreuter, and its early focus was the manufacturing and sale of damper actuators, pneumatic-electric switches, and logic relays for the heating, ventilation, and air conditioning (HVAC) systems in commercial buildings. These low-tech circuits operate on air pressure and use mechanical actuators to perform control functions. Pneumatic control systems are still used in many buildings, especially in metropolitan areas, because of their large base of installation throughout the 1960s and 1970s. 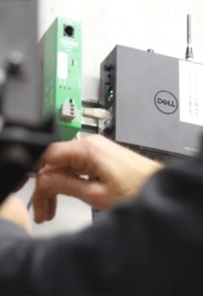 “Ken held many patents and built the company selling pneumatic controls to OEMs,” says KMC’s current CEO, Richard Newberry. “As time went on – and technology moved along – the company continued to evolve, building a full line of HVAC products and services that included pneumatic and analog/electronic controls and sensors.” Throughout the 1980s, these devices became increasingly popular, due to faster response time and higher precision than pneumatics. In response, KMC began manufacturing electronic sensors, variable air volume controllers, thermostats, actuators, valves, and other devices that operated from low-voltage DC analog signals.

“After electronic, things became digital – digital controls for HVAC solutions now involved software, as well,” Newberry adds. In the 1990s, microprocessor-based, direct digital controls became the standard. These processed a variety of analog and binary inputs and outputs. KMC broadened its scope by developing digital controllers and software – its KMDigital line. “Now, with fancy graphical user interfaces, facility managers could see all of their HVAC networks on a computer screen at their desk,” Newberry says.

The industry continued to change rapidly. “Most companies started out with a proprietary protocol that was only used in their controls,” Newberry explains. “But as the industry evolved, there became a demand for an open industry protocol. So, KMC was one of the first companies to adopt BACnet.”

BACnet is an acronym for Building Automation and Control Networks. The BACnet standard was developed by the American Society of Heating, Refrigerating, and Air-Conditioning Engineers so that manufacturers could create interoperable systems of products that would allow for open communication between all building automation and control systems, such as HVAC, lighting, access, and fire detection, as well as their associated equipment. It became an industry standard in the 1990s because of the desire for a non-proprietary or open, protocol, and today almost all new buildings utilize BACnet. “KMC was one of the first companies to adopt BACnet in its purest form” says Newberry. “Our first line of BACnet controls came out in 2003.”

Technology evolved again. “Digital transformation was happening,” Newberry says. “Mobile phones and the cloud allowed data to be on an offsite server versus on premise. As the Internet of Things became more prevalent, there was a greater demand for a mobile experience.” The Internet of Things, or IoT, is a system of internet-enabled devices capable of reading and writing data securely to the cloud, communicating directly with one another and automatically performing tasks based on data received.

“About three-and-a-half years ago, KMC launched a new IoT solution bringing an open, secure, and scalable platform to the market that provided a very rich, mobile experience,” Newberry recounts. “Working with industry partners Intel and Dell, and with open source software, we built a platform called KMC Commander.”

KMC Commander is a complete IoT platform for building automation that forms an end-to-end solution, from sensors and controllers to cloud-based, remote management applications. “Building owners, property managers, and occupants demand openness, robust security, seamless scalability, and ease of use when it comes to controlling their environment, managing their energy consumption, and accessing data to make informed decisions,” Newberry says. “KMC Commander is the only solution on the market to meet all four criteria. They can visualize, in real time, relevant data on their phone or any device, and they can command and control whatever is connected to it.”

“It’s an affordable solution for small buildings,” he adds. 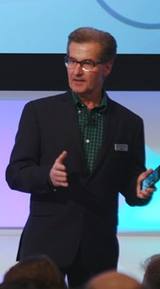 “Buildings are the biggest consumer of energy. There are five million buildings in the United States that do not have any smart systems, and they’re using 15 to 30 percent more energy than they should. There was no affordable solution for those buildings. So, we wanted to make sure it was affordable for a small building. There is a big opportunity to solve a lot of environmental issues by focusing on making facilities more operationally efficient, utilizing less energy, and increasing occupant comfort and safety. KMC is the only company that has a market-ready, building solution.”

Newberry reports that, today, about a third of KMC’s business is comprised of sales to OEMs, such as Honeywell, Emerson, and Carrier. “But our primary business is selling through approximately 150 system integrators throughout the world that do integration and installation,” he says. “We train them on our solution and they have the customer relationships. We are very responsible and supportive of our customers and their customers. Our services and technical support is superior, and we continue to make it better, every year.”

Newberry also believes, as a company that’s smaller than its major competitors, such as Johnson Controls, Honeywell, Siemens, and Schneider Electric, KMC is more agile and committed to both adopting and facilitating new technologies as they evolve. “We are very much involved in the digital transformation that is happening in our industry,” he declares. “We have the ability to do that faster than our competitors. We have improved our solution and enhanced it with technology to make it even more intuitive and easy to install. The whole hardware/software pack allows our customers to use new technology with their phone, and our promise to our customers is to provide innovative and intuitive solutions from responsive and supportive people. We think those elements differentiate us.”

Newberry also realizes that technology never stands still and going forward, KMC will continue to innovate and evolve. “Another big direction that’s different from what we did in the past; we will be opening up a whole new channel,” he says. “We consider our traditional partners as OT – that stands for Operational Technology: HVAC, lighting, and security. But there’s a whole new channel that we’re developing – that’s the IT (Information Technology) providers, because KMC Commander can connect to data centers, server racks, and UPSs (Uninterruptible Power Supplies). Over the next five years, there’s going to be a convergence of the OT type firms and the IT type firms. Studies have shown that by 2020, 50 percent of IT budgets will be IoT projects. So, we’re going to focus heavily on KMC Commander; we will continue to develop apps for it and market it to an IT channel as well as an OT channel, facilitating the relationship between the two.”

“It’s all about getting relevant data in real time to any device, via the cloud, so IoT is where we’re really focused, going forward,” Newberry says in summation. “IoT is going to be four times as big as the industrial revolution; it’s going to generate untold trillions of dollars of GDP. Because of open source software and the lowering of the cost of sensors, the ROI on getting data to the cloud and doing something meaningful with it to save energy and make facilities more efficient is here. Anybody that doesn’t get onboard is going to be left behind.”

And being left behind is not in the DNA of KMC Controls. It never has been, and it never will be. This is a company that will always be in the forefront of change.

WHO: KMC Controls
WHAT: A manufacturer of building automation solutions
WHERE: New Paris, Indiana
WEBSITE: www.kmccontrols.com 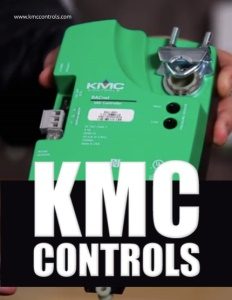