Cheney Stadium is a minor league baseball stadium located in Tacoma, Washington, a city of approximately 211,000, on the banks of Puget Sound, some 32 miles southwest of Seattle. The development of Cheney Stadium as the home of Pacific Coast League baseball in Tacoma began in 1957 as a shared idea by area businessmen Ben Cheney and Clay Huntington. Following a three-year effort by these men, the San Francisco Giants agreed, in the fall of 1959, to relocate their Triple-A club from Phoenix to Tacoma, hinged on the city’s ability to construct a new stadium in time for the beginning of the 1960 season. 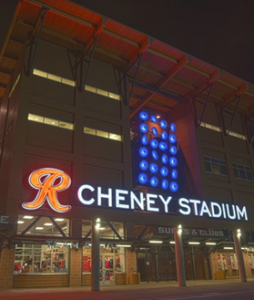 Tacoma’s city council quickly approved the deal, and the project took just over three months to complete, thus earning the stadium the moniker: the “100-Day Wonder.” The speed at which the venue was built was partially due to the importation of some historical pieces from the Seals Stadium, a minor league ballpark in San Francisco, built in 1931 and demolished in 1959. “When the idea to bring baseball to Tacoma became a reality, they put six light towers on a barge, along with all the fixed seats the stadium utilized, and sent them to Tacoma,” recounts Nick Cherniske, Director of Stadium Operations. “So we had Seals Stadium seats and light towers for many years. The light towers remain and we do have a small piece of the seating bowl that actually has the same 1891 wooden seats that have been a part of baseball for over 120 years.”

Since its inception, Cheney Stadium has hosted seven different minor league baseball teams; it has been the home of the Tacoma Rainiers of the Pacific Coast League, an affiliate of the Seattle Mariners, since 1995, who play 70 home games there, every season. Beginning in March 2018, the Seattle Sounders FC 2 of the United Soccer League will also play their home games at Cheney, while awaiting the construction of a new stadium of their own. The stadium also hosts concerts, commencements, and corporate events. “We call them ballpark takeovers,” Cherniske quips. “Because of the weather in the northwest, especially in the winter, a lot of what you see in the offseason is focused in our suites – events and parties in our restaurant and club areas.”

After 58 years of continuous operation – Cheney Stadium is baseball’s second oldest Triple-A park – the city of Tacoma, which owns the stadium, along with its partners, the Ben Cheney Foundation and the team’s ownership committee, approved an ambitious $30 million, offseason renovation plan to include a new grandstand structure, roof, and concourse; new concession stands and seats; 16 luxury suites; a right field berm addition, a club/restaurant; a kids’ play area; and more restrooms. The Rainiers clubhouse and dugout, formerly located along the first base line, have shifted to third base, with visiting teams now residing in the fully renovated first base location. What has not changed are the views fans have grown accustomed to – the ballpark’s grandstand is still the same one constructed more than five decades ago, with the steep pitch that makes every one of its 6,500 seats in the house a great one.

“Our average capacity rate is 83.6 percent, but in 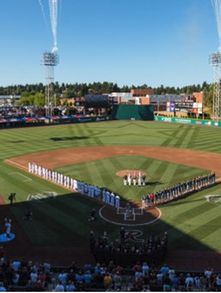 the summer months of the season, June, July, and August we reach the mid 90s” reports Megan Mead, Vice President of Marketing. “In the summer, there’s no more beautiful place to be than the Pacific Northwest. People love coming out to the park; it’s a great place for families. On a clear day, we have a beautiful view of Mt. Rainier from the stadium. In the summer months, in particular, we’re selling out games, frequently.”

Mead adds that the stadium also serves as a community asset in a multitude of ways. “Tacoma is about 25 minutes south of Seattle and we have a very unique community and culture, here,” she explains. “And we have a deep connection to that community, so we make sure that we’re creating a first-class experience for everybody in the city – whether that be baseball, or, now, soccer, or the community events we support. We’ve got sports camps where we partner with local organizations that get kids out to the field. Our players visit the local children’s hospital; they do school visits. We do summer movie nights – family-friendly movies that are free and open to the public. We have a full-scale whiffle ball field that’s onsite here and open to Tacoma citizens as long as we’re not in a game. So, there’s a deep connection to the community that’s really important to us.”

Media and Communications Manager, Brett Gleason, adds that Cheney Stadium is also a good environmental citizen. “We’re a member of the Green Sports Alliance, and we have a large emphasis on stormwater prevention,” he says. “The volume of rain we get in the northwest is significant, so with pervious asphalt in our parking lots, as well as the drive coming into the stadium, we’re reducing and ideally, eliminating the amount of surface water that makes its way into the storm drains and finds its way into the Puget Sound. Also, in the 70 games that we host, we have an 8th inning recycle break, where members of the ushering staff make their way throughout the stands and ask guests to recycle with us. We take a proactive approach to collect everybody’s recyclables and make sure that they’re disposed of correctly.” Mead adds that the stadium hosts sustainability nights on Tuesdays – fans who bring in cans for recycling get discounted tickets for Tuesday night games.

Speaking of games, Gleason reports that the Rainiers have had “a fantastic home record for the second straight year. The last three seasons, we’ve been well over .500 at home,” he enthuses. “A lot of walk-off wins; a lot of fun fireworks nights. We made the playoffs in the 2016 season.” The stadium also hosted this past summer’s Triple-A All Star Game and Home Run Derby.

“We continue to put upgrades into the facility to make the fan experience as unique and powerful as we can,” Cherniske states in summation, “because it’s a lot more than baseball that we host 70 times a season. Each year, the front office, the ownership committee, and the Cheney Foundation continue to build our brand and our facility, and we’re going to continue to prove that we’re an integral piece of Tacoma.” 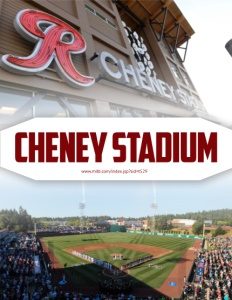