Sun Prairie, Wisconsin – The best of both worlds

The best of both worlds

Geographically, the city of Sun Prairie, Wisconsin – latitude: 43°11 0.97 N, longitude:  89°13 56.41 W.; elevation 984 ft.; total area, 12.25 square miles – is located in Dane County, some 15.8 miles northwest of Madison, the state capital, in the southern part of The Badger State. But according to Neil Stechschulte, Sun Prairie’s Director of Economic Development, you can also find it by sight, alone. “If you’re in the Greater Madison or Dane County area, and you want to know where Sun Prairie is, just look for the cloud of dust on the horizon,” he says. “The amount of work going on this year is unprecedented.” 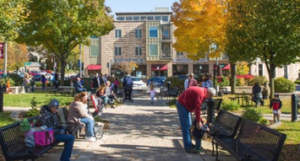 For many years, Sun Prairie was a spread-out, bedroom community of Madison with a population one tenth its size. “People were very used to just driving into Madison for everything they needed,” Stechschulte explains. “It’s a ten minute drive down the road. All the shopping, all the employment, was just a jump on the highway to get to Madison.” But over the last several years, the city has attempted to carve out its own economic identity, having added over 750,000 square feet of industrial/warehouse space, and approximately 2.5 million square feet of retail, providing more opportunities for employment, shopping, and dining. “So our growth has been really, really impressive,” he adds. “We’ve done quite a bit. Our population is about 33,000 now, growing by, roughly, a thousand people a year.”

To back up those assertions, Stechschulte offers a long list of current infrastructure projects, as well as the many public and private investments that are continuing to transform Sun Prairie’s economy, character, and styles of living. “In terms of infrastructure, we’re wrapping up a citywide ‘fiber-to-the-premises’ project,” he begins. “It’s a partnership with Sun Prairie Utilities and TDS Communications, which will run high speed internet to almost every building – business and residence – in Sun Prairie. We’ll be one of the first communities in the Dane County/Greater Madison area to have a complete network in place and so, we’re excited about that.”

“We’ve got two elementary schools under construction, right now,” Stechschulte continues, “one in the western part of our community and one in the northern part. Those are two significant investments from our taxpayers that encapsulate what our population growth has been. And we’re looking at either expanding our high school or building a second high school within the next three to five years to accommodate all the growth that we’ve been seeing. We’ve got some road reconstruction coming up, and some regional stormwater facilities we’re trying to get in place to encourage and accelerate development. Most developers smile when they hear us say that we’re getting that infrastructure in place to take care of future projects. And we have other advantages, like our municipal-owned electric utility that allows us to provide electric rates that are anywhere from five to twenty percent more affordable than investor-owned utilities. And, we approve projects faster here in Sun Prairie versus other communities.”

Stechschulte adds that the city recently acquired an additional 64 acres just north of the Park. “Riddell Corporation – the guys who make the football helmets – is a brand new tenant in our newest expansion area in our Business Park,” he reports. “We facilitated that project in terms of land acquisition, creating a TIF district, annexation, zoning – the whole nine yards in a little less than nine months to make that project happen.

Then there is a new, private business park coming online. “It’s going to be about 700,000 square feet of higher-end, industrial and office space,” Stechschulte says. “A private developer by the name of Interstate Partners is putting that project in. There’s about $3 million in infrastructure the city is going to be helping to fund with a TIF district. They’re putting up their first building: 130,000 square feet, starting construction, right now. So, hopefully, that will be up and done by the middle of 2018.”

Other private development projects underway include a new Hilton Garden Inn to be completed by next autumn or earlier, and a new Menard’s Home Improvement retail store – about 200,000 square feet – that should be open by spring. The Full Mile Beer Company & Kitchen is breaking ground, downtown, and should also be ready for business by next fall. 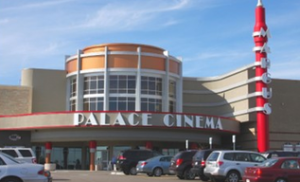 says that the city has spent a lot of time and money over the last decade or so protecting, enhancing, and expanding what was once a very small, old, traditional downtown core. “It used to be the edge of town, on the far east side of the community, with some pretty rough industrial uses there – an agricultural processing facility and an animal processing facility for farmers in the area,” he recounts. “But the city took an aggressive step, acquired a lot of the land, and knocked down the industrial buildings. The main driver that really helped us turn the corner was, on a big chunk of the land we acquired, we added a considerable number of housing units, including apartments and townhomes, as well as some additional new commercial. We built our City Hall, here, back in the mid-90s to generate a hub of activity on this side of town. In fact, since the mid-90s, we’ve really done a focused effort, trying to provide more opportunities for employment and shopping and dining.

“There are no national chains downtown; most of the proprietors and owners and operators here are all local, and that’s really helped create a sense of identity for the area. There are no commercial/retail vacancies now in that traditional two-block area. We’re all full up. And we created a business improvement district where all the businesses voluntarily contribute funds to help promote and engage other activities downtown. We have a good pedestrian network; adding all the residential density has reinforced that need to have that pedestrian connectivity. So, residents in apartment buildings, half a block off Main Street, can easily walk up to all the shops and restaurants. We built a pedestrian mall downtown right across from City Hall and the newest residential development in the area. A lot of festivals and events happen there in that little park area. So, downtown has probably been one of the largest successes we’ve seen.”

Naturally, Sun Prairie’s accelerating economic engine has spurred the need for more housing. “The supply is simply not keeping up with the demand,” Stechschulte avers. “So, we’re seeing market rate apartments being proposed in multiple locations throughout the city. I think we have something like 600 units approved in the system and about 300 of those are already under construction, right now.” The city is also hoping to add more “workforce housing” – affordable apartment units for those making less than 60 percent of the Dane County median income.

As Sun Prairie continues to grow, Stechschulte admits that while the city aims to distinguish itself from nearby Madison, it will always be tied economically to the larger metropolis. “The greater Madison region is a huge economic generator for the entire state,” he says. “And when you compare what’s going on here to many other places in the state, the Madison area market is really robust and doing very well. The amount of state and local government located in Madison, the University of Wisconsin, those things not only drive the economy, they also help protect it against downturns. So, in many ways, we go the way the Madison market goes. But we are trying to do our best to create our own unique opportunities over here. And we see a lot of that in the form of advanced manufacturing opportunities as well as specialized and localized retail – shopping and dining destinations that set us apart from the rest of the Madison area.”

In the end, Stechschulte believes that Sun Prairie offers people a very appealing alternative to living in Madison, with the benefit of it being close by. “We acknowledge that we’re part of one of the fastest growing regions in Wisconsin, but we don’t want people to be afraid of the growth,” he implores. “We can’t say that we’re a small town, anymore, but we have a small town feel in a lot of ways. We still have that community feel, and we take a lot of pride in our ability to maintain that identity of who we are. For people who still want to be able to enjoy things in an urban area like Madison, but looking to have a little bit of room and more affordability, we are the best opportunity for just about everybody here in Dane County.”

WHERE: Dane County, northwest of Madison 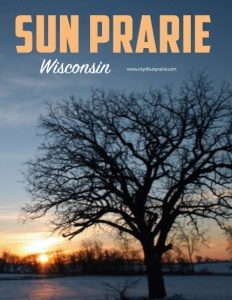