City of Broomfield – Great Place to Live, Work and Play

The municipality of Broomfield, Colo. was incorporated as a city of just 6,000 residents in 1961.

But that official milestone was merely the start of a two-pronged growth spurt.
Broomfield stretched beyond its Boulder County borders with annexations into Jefferson, Adams and Weld counties over a three-decade span through 1989 – and a significant population spike was instigated by the arrival of large technology and telecom companies by the middle of the 1990s.

That swell of new arrivals – and the subsequent service headaches created by a city linked to four jurisdictions – prompted passage of an amendment to the state constitution that opened a three-year transitional window for allowing Broomfield to reconfigure itself as the state’s 64th county. 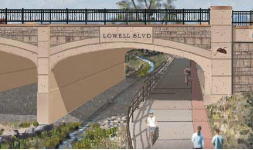 Such a prolific pace for expansion creates behind-the-scenes challenge for people like Katie Allen, the city/county engineer who’s in charge of a divisional staff – within the Community Development Department – that’s tasked with monitoring engineering requirements for design and construction of street and traffic systems, water systems, sanitary sewer, park systems and drainage facilities.

Another division she oversees is responsible for capital improvement projects, and it’s the uniqueness of the way the city/county entity functions that’s kept her there for what’ll be 20 years in June.

“There’s a lot of work and a lot of different projects to work on,” she said. “I like the continual learning curve. It’s a variety. When I say we do all capital projects, I mean we do all capital projects. I’m working on a road and I’m working on a health and human services building right now, so I learn very different things all at one time. Sometimes we’re working playgrounds. Sometimes it’s flood control. That what keeps me here, the variety.”

The capital improvement division includes six engineers who handle the construction phase of projects, before turning the monitoring of the completed infrastructure to Broomfield’s Public Works Department.
Among a handful of significant projects with which engineers are now involved is major construction work on Lowell Boulevard. Upon completion, the work will not only yield a four-lane arterial for the one-mile stretch between 120th Avenue and East Midway Boulevard, but also add a dedicated right turn lane at East Midway, complete curb, sidewalks and landscaping along the open space at Metzger Farm, complete a bridge over the Nissen Channel, provide a trail underpass to the Metzger Farm open space and upgrade water and storm sewer facilities along Lowell Boulevard.

The $10 million price tag is being picked up jointly by Broomfield, another jurisdiction and the Urban Drainage and Flood Control District, which assists local governments in the Denver metropolitan area with multi-jurisdictional drainage and flood control problems. Major road construction activities are expected to end by December, though final landscaping will not take place until spring 2016.

“It’ll be a challenge to keep it open to traffic and work through the winter,” Allen said, “but hopefully they will be predictable challenges compared to all the coordination aspects.”

Also on her daily agenda is work on a 43,500-square-foot building to house the county’s Health and Human Services Department, which includes divisions devoted to self-sufficiency, employment and public assistance, family and children’s services, public health and environment and senior services.

Public Health was initially going to be contracted out to another county when Broomfield consolidated, but that agreement fell through and that division was added without additional space. Employees of the various divisions have since been crammed into older buildings and satellite offices. The entire $16.5 million project includes $1 million for the purchase of land and $1 million for architectural and engineering services, with the remaining $14.5 million earmarked for construction – including fixtures, furniture, equipment and other fees.
Construction, scheduled to begin in March, is expected to last 11 months.

Building occupancy is expected in April 2016.

“It’s a civic center area, where the main city and county building is, along with our library, recreation and senior center. So it’s going to be brought into that space,” Allen said. “We’re all very excited about it.”

Meanwhile, in a nod toward green building and 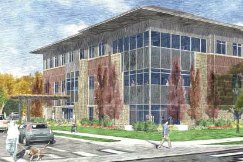 As part of those agreements, the roofs, parking lots or yards of those buildings are leased to private solar companies and power generated is purchased back from those companies at an agreed-to rate, with the assumption that solar power will be less expensive than traditional sources in the future and that ultimately the amount of power purchased will be enough to fully service the buildings.

Broomfield’s current solar capacity is up to 900 kilowatts, she said, and the energy is now being used to fully power small pump stations, while meeting 5 to 10 percent of the overall need at the buildings.

Going forward, Allen expects her agendas to remain full of transportation-centric congestion issues, in addition to more new facilities once work being doing for health and human services is complete.

“It’s becoming an issue, now that we’re growing and services are growing,” she said. “We have several facilities on deck. I think it’s easy to see that that’s what’s going to remain important to us.”

WHO: City of Broomfield
WHAT: Consolidated city/county that includes 33.6 square miles and is home to 55,889 residents, according to the 2010 U.S. Census
WHERE: North central Colorado – 13 miles southeast of Boulder, 15 miles north of Denver, 80 miles south of the Wyoming state line and 90 miles south of Cheyenne, Wyo.
WEBSITE: www.ci.Broomfield.co.us 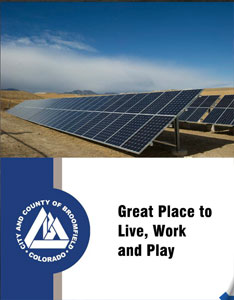