At the southernmost length of the Blue Ridge, part of the Appalachian Mountains, sits the town of Anniston, Alabama. Named “The Model City” by Atlanta newspaperman, Henry W. Grady for its careful planning in the late 19th century, Anniston was once home to the Woodstock Iron Company, founded in 1872, by Samuel Noble and Union General, Daniel Tyler. The town was chartered in 1873, and was first known as “Annie’s Town” for Annie Scott Tyler, the wife of railroad magnate Alfred L. Tyler.

In 1917, at the start of World War I, the U.S. Army established a training camp at Fort McClellan on the northeast side of town. On the other side of town, the Anniston Army Depot, a largely civilian installation, opened during World War II. The Depot still operates today and is the town’s largest employer, with approximately 4,000 workers. However, in 1999, Fort McClellan was disbanded. “We are what is called a BRAC Community,” says Kent Davis, Anniston’s City Manager. “Fort McClellan was closed under the Base Realignment and Closure Act of 1995.”

While the closing of the base severely impacted the town’s economic welfare in the first few years after its closure, Davis maintains that it also presented Anniston with a great opportunity for its eventual redevelopment. “Now, it was a tough economic impact immediately,” he says, “but we pretty much made up for those losses with jobs elsewhere in the economy over the ensuing 16 or 17 years since.”

“Any time there’s a base closure, there is a local re-use authority that’s chartered both by the Department of Defense and the state, and we have that here,” he explains. “It’s called the McClellan Development Authority. And it has spent the better part of the last 16 years trying to redevelop Fort McClellan, which was originally almost 40,000 acres in size. And they had pretty good luck in redeveloping the entire base. The Authority works very closely with our office, the City of Anniston Department of Economic Development. We do joint marketing; we do outreach and presentations together because they’re in the city limits of Anniston.”

Even though the Army has departed, the largest new employer out at the old base is still the federal government. “The U.S. Department of Homeland Security operates a training facility called the Center for Domestic Preparedness that has over 900 employees,” says Davis. “They train state and local responders from around the country. Another large employer is one of the nation’s largest violin manufacturers, called the Howard Core Company. There’s also an auto parts manufacturer there -International Automotive Components; Alabama Gas Company is out there; and there’s a sporting goods company—Creedmoor Sports—that moved here from California to the old Fort McClellan a few years ago. And there are plenty of other, smaller businesses out there, too.”

Davis says that residential development has also been successful. “In the process of redeveloping Fort McClellan, nearly 200 buildings have been taken down, but most of the old residential areas were preserved and the private sector came in and renovated those housing areas and they’re fully occupied,” he reports. “It’s a beautiful area. Some of the old homes date back more than 60 years. It’s in the foothills of the southern Appalachian Mountains and they’ve done a good job of attracting residents, there.”

Other parts of the base have been designated for industry. “They’ve recently completed work on a new industrial park,” Davis says. “They have a few residents already and they have parcels anywhere from about 10 acres up to about 100 acres that are available, pretty much shovel-ready for development, with infrastructure and utilities in place.” In addition, a big portion of the base has been taken over by the Alabama National Guard for a training center, and some 9,000 acres were transferred to the U.S. Fish and Wildlife Service for the Mountain Longleaf National Wildlife Refuge.

The repurposing of yet another aspect of the area’s infrastructure has become an additional “great gift” to the city, according to Davis, and, indeed, has helped transform Anniston into what he now calls a “bike mecca.” “Back in the 1900s, there was an abandoned rail line; it was an old passenger rail line that ran between Anniston, Alabama and Atlanta, Georgia,” he begins. “And the right-of-way became available. It was the old Silver Comet passenger line. Here in Alabama, it’s called the Chief Ladiga Trail. There was a joint effort between Georgia and Alabama, in cooperation with some non-profit groups and municipalities along that entire right-of-way, to preserve it as a bike trail and make it a ‘rails to trails’ project. Municipalities and counties along the way did a great job of paving the old railway. And it’s been a resounding success.

“About eight years ago, the final link was completed. Now, there are over 90 miles of paved, continuous trails between Anniston and Atlanta. It really is a beautiful, beautiful bike trail. It goes through the southern Appalachian Mountains; it goes through old train tunnels; it goes over trestles; it goes over creeks. It’s one of those well-kept secrets that people are starting to discover more and more. We are in the process, now, of doing the final extension of the trail. It ends on the north side of Anniston and we’re extending it into downtown to link it to our Amtrak station. Within the next few years, we anticipate finishing the final extension of the bike trail, linking it to a new series of bike paths we have on roadways, downtown.”

In addition, on the west side of town is the Coldwater Mountain Bike Trail, a nearly 40-mile, single-track, bronze-level trail that is the result of a public/private partnership between the City of Anniston, bicycling organizations (including the very active Northeast Alabama Bicycle Association), other non-profit groups, grant providers, and the state’s Forever Wild Program, which donated a lot of land for the project. “The plan is, within the next few years, to link all of those bike systems together, so you’ll have about a hundred miles of road bike trails from Atlanta, Georgia ending at the Amtrak station in Anniston,” says Davis. “And that will be linked to our mountain biking trail system on the southwest side of town and it will also be linked into our downtown bike paths on city streets. It’s a huge green initiative that we’re really proud of and we’re starting to see a lot of people visit Anniston just for those venues.”

As Anniston prepares to become more and more of an eco-tourism destination – in addition to its bike trails, the area also has great hiking, kayaking, and canoeing opportunities, including close proximity to the Alabama River Trail, a 632-mile long waterway that traverses the entire state – the city is also working on redeveloping its historic downtown, a several block-long area centered on Noble Street, the downtown area’s main artery. “Like many traditional, American downtown areas, we faced the flight of businesses to the indoor malls and strip malls,” Davis laments. “It was thriving until the 1970s, and then business started to move away to the suburbs. That seems to be reversing now, and we have a few initiatives to help that reversal along.”

For one thing, the city is partnering with the Main Street Alabama Program, which will soon be sending a resource team to Anniston to help put together further plans for its downtown redevelopment. In addition, Anniston has initiated a Downtown Development Incentive Program, which provides matching grant money for interior structural and/or façade improvements for businesses in the historic district. Finally, Davis says that the city has recently created a formal Arts and Entertainment District for downtown which will give restaurant owners a little more leeway for sidewalk dining and sidewalk service of alcohol.

“The biggest success I think we’ve had in the historic downtown area is that is has become quite a bit of a restaurant district, already,” Davis exclaims. “We have some great niche restaurants; we have a famous restaurant called the Classic On Noble. People will drive over from Atlanta and Birmingham an hour or more in the car just to come eat dinner or Sunday brunch. We have our own microbrewery,” he adds. “Cheaha Brewing Company, right off of Noble Street, built in the old freight train depot off of what will hopefully become the extension of the Chief Ladiga bike trail. We’ve added some other superb niche restaurants, including Italian (Effina’s) and Thai (Thai One On) eateries that have sprung up; we have a couple of high rise buildings downtown, and by December 31st, there’s going to be another fine dining place open at the top of one that’s eleven stories, called The High Point Restaurant. It’s right in the heart of downtown and it will have a 360 degree view of the mountains around Anniston.”

A bike mecca, a repurposed army base, and a thriving downtown are all in the mix for Anniston, Alabama. It seems as though the 19th century’s “Model City” is definitely back on track in the 21st.

Check out this handpicked feature on Gadsden, Alabama – Queen city of the Coosa.

WHERE: East central Alabama, between Birmingham and Atlanta, GA 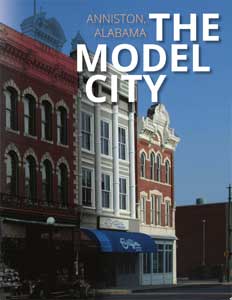