Apricot Lane. The name conjures up visions of a quiet, shady cobblestone street in some quaint country town. But Apricot Lane is much more than that (which is not to disparage quiet, shady cobblestone streets). Founded by Partners, Ken Petersen, Scott Jacobs and Tom Brady eight years ago, today, Apricot Lane is the nation’s leading women’s fashion boutique franchise company. Yet until 2007, there was no Apricot Lane, at all (outside of any quaint country towns) – there was only an idea in the mind of Petersen, a risk-taking businessman who took a look at women’s retail fashion across America, noticed something interesting, and then went ahead to change the face of an the entire industry.
Before beginning the Apricot Lane Boutique venture, Petersen already had many years in the franchising world, starting out with gifts and collectibles, so he knew and understood the benefits of the franchising model. And what he noticed when researching women’s fashion was that there was a gap that he believed franchising could fill.

According to Petersen, the women’s retail fashion industry had, at the time, two components: there were the mom and pop stores, all independently owned, staffed, and stocked by courageous entrepreneurs who were basically on their own. These small shops had the benefit of being nimble enough to respond to customer demands, but they didn’t have any leverage. Then there were the national chains. These stores were all corporately owned, so they benefitted from economies of scale, but they were all the same in every location across the map. 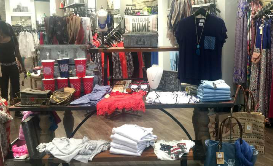 “So there was really nobody in the middle,” Petersen continued, “and there wasn’t a single franchise out there supporting independent operators. So we filled the middle – that huge void in the industry that didn’t exist before Apricot Lane. We brought that infrastructure that the nationals really enjoy in the areas of buying and inventory management, fashion trends,
marketing, real estate, lease negotiations, operations, and networking, and created an opportunity for mom and pop boutiques all over the country to act like and compete with the national retailers.”

Now that Apricot Lane had its business model in place, it still had to find its own individual style as well as define its priorities for its potential franchisees. Petersen decided that he wasn’t interested in just being a Junior’s retailer. “We didn’t just want to go after the teenage marketplace. We also knew that we didn’t want to go after the older customer. We wanted to fit that millennial – that middle. Our ideal vision, which I think we’ve been able to capture, is to create a mom and daughter type concept. A unique boutique that could cater to mom and daughter – and that has proven to be successful.”

A key factor to that success has been one overriding approach that sets Apricot Lane apart from most other franchise operations: flexibility. “Using the word flexible and franchise in the same sentence is not typical in franchising,” opined Petersen. “Usually franchising is very structured. One of the strengths of our brand is we give flexibility to our franchisee in the area of buying.” Thus, Apricot Lane franchisees are not reliant on corporate to do the buying and identifying of all the best buys across the country. Individual franchises can go to their regional marketplaces for what best suits their store’s customers.

“Then, once a month we have system-wide conference calls to talk about what’s working, what’s not working and a lot of our best finds come from our franchisees. Then we go to those vendors and say that we’ve got a few stores that are carrying you, right now, and if you want us to approve you and launch you throughout our system, we need X, Y and Z, and then we pass that leverage and those discounts to our franchisees to increase their margin. So it’s really a team effort.”

That team effort remains strong throughout the franchisor/franchisee relationship as Apricot Lane corporate continues to communicate regularly with its store operators. The home office also conducts a comprehensive training program for its franchisees, helping them become competent in all the facets of the business’ operations.
When a franchisee first opens an Apricot Lane Boutique, it gets a complete merchandise plan coordinated from corporate. “When we’re setting up a new store, we’ll lay in an initial inventory through our approved supplier chain and then, once they open, we’ll go in and identify the response from the customers. The beautiful thing about Apricot Lane is, every store gets to morph their merchandise mix, specific to the needs of their demographic and their customers. So the stores are all different. That’s that unique boutique that customers like to see.”

Yet another aspect that sets the Apricot Lane brand apart, 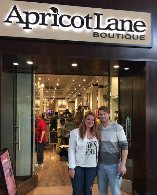 according to Petersen, is that it follows a “broad and shallow” model. That means that the stores are based on quick replenishment. There’s always new merchandise coming into a store, and inventory is not overly deep. Apricot Lane’s franchisees advise that if a customer sees something they like in an Apricot Lane Boutique, they should buy it, because it “may not be there next week.”

Petersen maintains that the company is very selective in the franchise process and that “fit” is very important. (Corporate doesn’t have to go out and market territories to find franchise leads – it simply has to react to the franchise leads that come into its Vacaville, California office, every day.) “We’ll spend several weeks learning about a local marketplace, real estate, location, the malls, the shopping centers, availability, sales, etc. Then we’ll fly out to meet [a prospect] face to face. We’ll spend an entire day with our franchise prospect, educating him or her about the marketplace, getting to know each other very well before we’ll come back and award a franchise.” And while it’s true that most Apricot Lane franchisees are women, some stores are run by husband and wife teams, and there are several that are operated by moms and daughters. Over half of the company’s franchisees operate more than one store.

Is it necessary to have a fashion background in order to earn the privilege of joining the Apricot Lane brand? “We certainly like a sense of fashion; we also want an active franchisee that’s involved in the day-to-day business.” But there’s another important aspect of the Apricot Lane ethos that’s important to the company’s founder. “We want Apricot Lane franchisees to give back to the community.”

Petersen, himself, takes community participation very seriously. As a national brand, the company has aligned itself publicly with the campaign to end human trafficking via its relationship with 3 Strands Global, a non-profit organization dedicated to that worthy cause.
What does Petersen foresee for his brand in upcoming years? “We’re on track to grow at 20 to 25 stores per year. We don’t want to grow faster than we can support. What we’re focused on right now is the efficiencies, staying up on social media, and marketing, and increasing store sales, increasing margins, evaluating new technology all of which supports our franchisees. Our success relies on the success of our franchisees, so a big part of our support and operations is to provide resources that franchisees can pick and choose to grow their business.”

When Apricot Lane first appeared in the marketplace in 2007, nobody knew that the Great Recession was right around the corner. And yet this successful franchise company not only made it through those difficult economic times, it prospered and grew. There are now 80 Apricot Lane Boutiques across the country, selling the latest collections, as well as unique women’s apparel, jewelry, handbags, accessories, and gifts. If the next several years mirror its first eight, the future of this visionary franchise company should be a walk in the park – or maybe a walk down a quiet, shady cobblestone street in some quaint country town.

WHO: Apricot Lane Boutiques
WHAT: The nation’s leading women’s fashion boutique franchise company
WHERE: Headquarters in Vacaville, CA. with 80 franchises across the country
WEBSITE: www.apricotlaneboutique.com 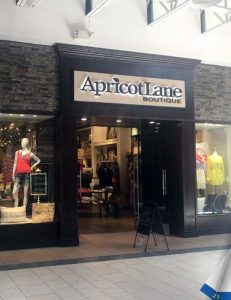