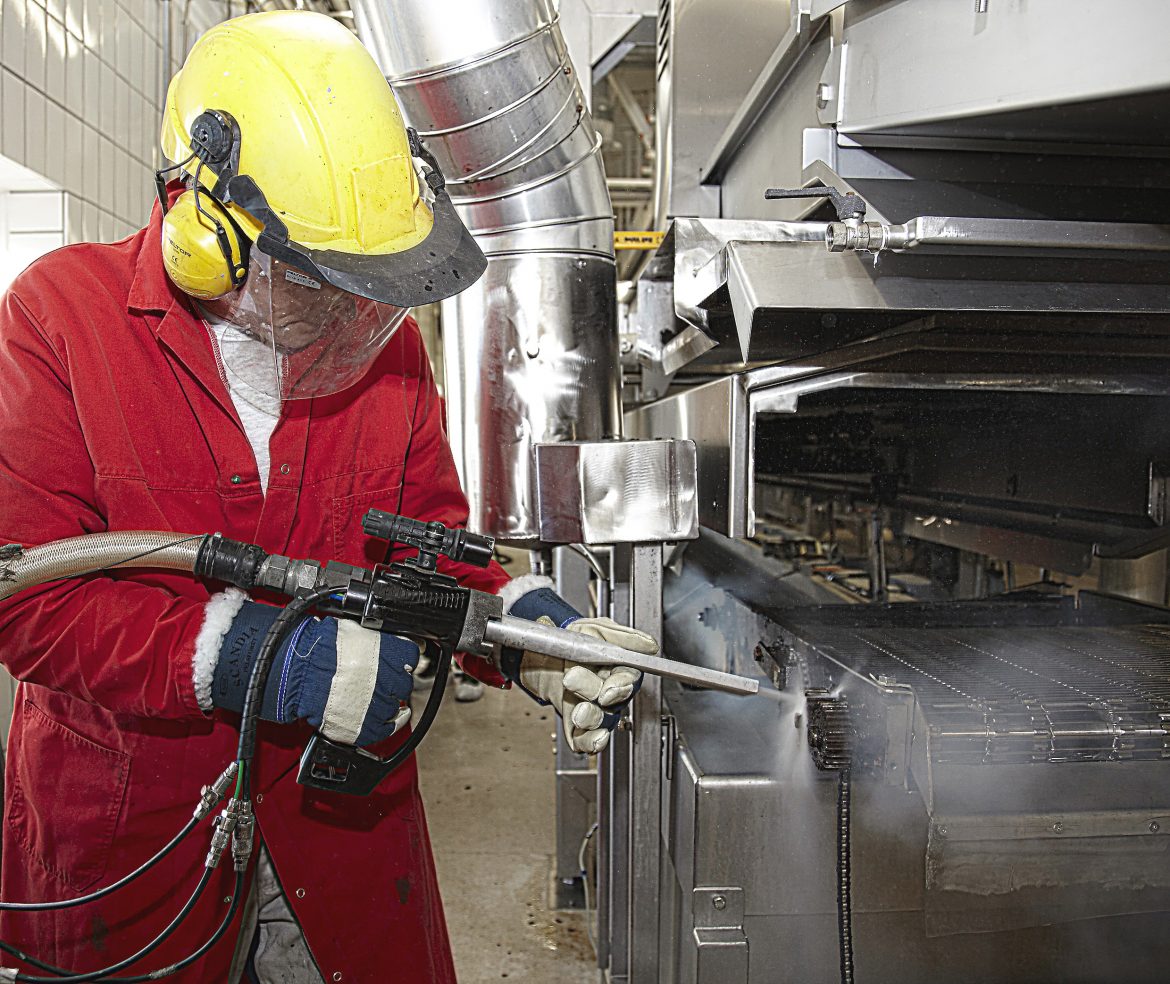 Carbon dioxide (chemical formula CO2), is the gas that we exhale during breathing and the gas that plants use in photosynthesis. It is also the same gas commonly added to water to make soda, thus the term: carbonated beverages. In its solid form, CO2 is called dry ice, often used as refrigerant and, more recently, as an abrasive in what is known as dry ice blasting. According to Tyson Marlowe, Director of Global Training and Development for Cold Jet, LLC, a manufacturer of dry ice blasting equipment, the technology was originally developed by the Lockheed Corporation in the 1970s as a method to remove the paint from the skins of aircraft.

“Dry ice is not aggressive enough to do that on its own, so they never really developed in into a big commercial system,” Marlowe explains. “However, there are a number of industrial cleaning applications that it works really well on. So, in the mid-‘80s, an investment group got together in southern California and licensed the patents from Lockheed. They had developed a two-hose, venturi-style, dry ice blasting system. About the same time, Cold Jet started in Louisville, Kentucky. They had a different technology for dry ice blasting with a single hose, or a positive feed system, which required an air lock – basically, it mixed the dry ice particles with compressed air, rather than a vacuum tube pulling it down and mixing it at the applicator. It turns out that the single hose that Cold Jet developed is actually the better technology because you can achieve higher velocity with the particles, which in turn, means that you can clean faster and more powerfully. In 2003, Cold Jet ended up buying Alpheus, the company in California that licensed the patents from Lockheed. So, the history really starts in the mid-‘80s for developing dry ice blasting for a number of commercial cleaning applications.”

Marlowe breaks down the dry ice blasting process: “In concept, it’s sort of like sand blasting, but the effect is quite different. We propel particles with compressed air, but the particles we use are particles of dry ice. They hit the surface and there is some impact energy that does a lot of the cleaning. There are a couple of different formats – we can use three-millimeter pellets of dry ice that looks like rice. We can also take a block of dry ice and shave it, and you get a sugar-sized particle. The reason you’d want to do that is because smaller particles have less chance of damaging the substrate and you can do more precise cleaning because smaller particles fit into smaller gaps and vents of the different things that you’re cleaning. The particle size on the shaved dry ice is somewhere between 0.0 and 0.3 millimeters; so it’s quite a lot smaller.

“And dry ice has some other characteristics that other blast media do not have: dry ice is very cold so it cools the contaminants faster than the substrate, so they shrink and dis-bond. Also, as the particles hit a surface, they sublimate on impact, going from a solid to a gas, which means they disappear. There’s no secondary waste. If I clean with water, or sand, or baking soda, I have contaminated water or sand or baking soda that I have to deal with and that can be quite expensive and it can be an environmental problem depending on what you’re cleaning.”

“Part of the nature of dry ice particles as a blast media is they’re very soft,” he continues. “A hardness scale for minerals is a one to ten scale with talc being a one, diamond being a ten. Dry ice is about a 1.5 on that scale. Other blast medias: baking soda would probably be about a two or two-and-a-half; walnut shells, maybe a four; garnet is probably around a six or six-and-a-half; aluminum oxide, which is a very hard one, would be around eight-and-a-half, or so. In fact, we call dry ice a ‘non-abrasive cleaner’ because it is non-abrasive on most metals. We can clean metal parts without damaging them in any way. And that’s true even if they’re hot. So, there are a number of applications that are beneficial to use dry ice to clean because it won’t damage the surface.”

Marlowe also stresses that even though CO2 is a greenhouse gas, largely responsible for the progression of global warming, dry ice blasting is actually more beneficial to the environment than utilizing other blast media. “We don’t add CO2 – we just phase-change it,” he says. “We take it from a gas to a liquid to a solid and back to a gas. So, we’re simply phase-changing the CO2. It is an environmentally friendly and sustainable process because we don’t add any CO2 and we displace using water or chemicals. You get much longer asset life and better asset utilization rates, because we can clean without damage.”

Marlowe reports that about 10 to 15 percent of Cold Jet’s machines go to service contract providers, but that most of the company’s customers are manufacturers in many different industries. “Food and beverage is big for us. There are a lot of applications there,” he states. “Power generation; oil and gas. And then, restoration and remediation – fire restoration, mold remediation, historic rehabilitation – things like that. Those are the big applications for us. We are the OEM; we make the equipment and we sell it all over the world. We’ll sell to direct end-users, or we’ll sell to contractors who offer the service. But everybody who’s doing manufacturing probably has some application where they’re using dry ice or dry ice would be a good idea to use.”

Cold Jet’s global headquarters are in Loveland, Ohio, near Cincinnati, where it does most of its manufacturing. “We have a fabrication and machining site and also a final assembly site where we do most of the sub-assemblies and the final assembly and testing,” Marlowe says. “We do contract out some sub-assembling, depending on the equipment.” In 2016, the company acquired its main competitor, Icetech, a Danish company that had manufacturing sites in Denmark and Poland, which Cold Jet continued to keep in operation. It sells its products both directly and through distribution, and maintains sales and service offices in China, Japan, Belgium (its European headquarters are in Brussels), Germany, Poland, and Denmark. “In the U.S., we mostly do direct sales,” he adds. “We have a few key distributors that are also dry ice suppliers, so they have an inside track to sales, but most of it is direct in the U.S., Canada, and even in Latin America, although we have a mix of distributors in South America. In Mexico, we do mostly direct sales.”

Having already acquired its main competitor, Marlowe admits that there aren’t too many others in the dry ice blasting world to contend with. “It’s definitely a niche market,” he avers. “But the thing that separates us is we’re kind of the prime mover. We have been the innovator for the last 30 years and we continue to be so. Dry ice is minus-109° Fahrenheit, minus-79° Celsius, so it can be a little difficult to work with. It wants to suck moisture out of the air and freeze it into water and it can clump up and cause problems. So, you have to have a fair amount of planning into your machine to keep it moving and keep it loose and keep it flowing. The other thing – dry ice is such a soft media, you have to get it moving very fast. When it hits something, it turns to gas so you have to take a three-millimeter pellet, or something smaller, put it in a hopper, then through an air lock and mix it with compressed air, speed it up from zero to even as high as 1,200 feet per second. You have to get those high velocities in order for it to be effective without any turbulence. And we know how to do that. We actually hired a guy from GE Aerospace to design feeders and nozzles for us just because of that. So there’s a fair amount of industry knowledge, there.

“But to sum up why we’re better, I would have to say: performance, which means faster, more powerful cleaning. We do more with less; the variable costs – compressed air and dry ice – go down and the cleaning performance goes up. We clean faster, we clean better. And then, of course, there’s the quality and the service, as well. We’re a capital goods company; we sell capital goods, but we put a service model on that. We have customer service coordinators that are halfway between sales and service people that kind of ‘own’ the customer after the sale, so they continue to take care of them even though we don’t sell dry ice. There’s no continuing income, but we continue to take care of them. It really makes a loyal customer base and it’s been successful for us.”

When it comes to marketing its products, Marlowe says that Cold Jet is very proactive. “Being the number one company, we do bear the brunt of marketing expenses and we’re very aggressive in getting out there, especially for certain key industries and markets,” he declares. “We play big in the plastic and rubber molding space, which means we’re big in automotive and aerospace because of that. Foundries – that’s metal molding. We clean all that mold tooling – right in place, online, even when it’s hot. We’re very good at it. So, we spend a lot of time at conferences, tradeshows, and direct marketing to those people.”

“What we’ve done recently, and what’s really started to work, is we’re getting a much deeper market penetration,” he continues. “I can think of 40 industries and hundreds of applications where dry ice blast cleaning works, but we know it works really well in plastic molding. So, we went and hired a guy that specializes in plastic molding to come and just take dry ice into plastics. And it’s really starting to pay off. We’re seeing big time market penetration for the plastics industry. It’s gained market acceptance as the way to clean. So, we want more of that – more specific vertical integration of markets where we can dive deep and really find solutions that make a difference to our customers rather than just being a neat cleaner that’s out there.”

Finally, Marlowe adds that compared to many other American companies, Cold Jet contributes to the positive side of the country’s trade balance. “When we go to China, I’m the only guy on the plane going over there to sell stuff. Everybody else is going over there to make stuff,” he quips. “We manufacture in the U.S. and we’re proud of that. We have good quality products that we make here and sell all over the world.” 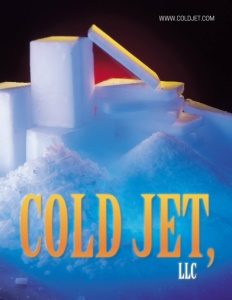