Commonwealth Stadium is an open-air, multipurpose stadium located close to downtown Edmonton, Alberta, Canada. It was originally built to host the 1978 Commonwealth Games, an international, multi-sport event involving athletes from the British Commonwealth of Nations. “In the early ‘70s, a group of Edmonton sports enthusiasts banded together to bid to host the Games,” recounts Jason Fesyk, the stadium’s Senior Operations Manager. In order to be awarded the Games, a host city needed to provide a stadium capable of seating over 40,000 as well as a pledge to build or renovate a range of other necessary sports venues. 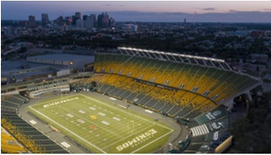 The Edmonton group secured significant federal, provincial, and city support for the bid, and, at first, some thought was given to rebuilding Clarke Stadium, home of the Edmonton Eskimo Football Club of the West Division of the Canadian Football League since 1949. In the end, the Edmonton City Council voted to construct a brand new stadium, right next door, which would not only host the Games, but afterward, would become the new permanent home of the Edmonton Eskimos. When the venue officially opened in July 1978, it had a capacity for 42,000 and a natural grass turf, unlike most other major stadiums in Canada.

The venue went through a slight expansion in 1980, when the seating capacity was increased to 43,346. In 1983, the Summer Universiade Games came to Edmonton, featuring student athletes from around the world, and this time, Commonwealth Stadium was expanded significantly to accommodate just over 60,000 spectators. “That was one of the major remodels – additional wings and seating,” says Fesyk. “Because of that, in 2002, the CFL Grey Cup Championship game that was played in Edmonton had an attendance of 62,531 people. That was a huge crowd for Canadian football.”

Ahead of the 2001 World Championships in Athletics, featuring 1677 participants from 189 nations, the stadium received a $24-million facelift. Major investments included a new facade, an enlargement of the concourse, improved lighting, a new scoreboard, and an all-new, all-weather running track. Ahead of the 2008 season, the stadium underwent a reconfiguration, reducing its capacity to 59,537. Its natural grass was replaced with artificial turf in 2010, in order to reduce the long-term costs of annual grass substitution while providing a year round, green playing surface.

Starting in 2009, the stadium underwent a $112-million facelift, with the main investment in the Field House, a 90,000.-sq.-ft., three-story training facility which includes a 65×65 yd. artificial turf training field, a fitness and weight room, locker rooms, and a running track. It is part of the Commonwealth Community Recreation Center, which also includes a 60,000-sq.-ft. aquatics center with a four-lane lap pool, water slide and a recreational pool; 30,000 sq. ft. of administrative offices; and a 30,000-sq.-ft. fitness center. The Center has Leadership in Energy and Environmental Design (LEED) Silver certification. Adjacent to Commonwealth Stadium, Clarke Stadium, seating 5,000, has been used as both a training field and as the home ground of the FC Edmonton, the city’s pro soccer franchise.

In 2012, the Commonwealth Stadium initiated a seating replacement program at a cost of $12 million. It removed all benches and replaced all seating with new, wider seats, reducing the capacity of the venue to 56,302. With the addition of the seating replacement, total investment in Commonwealth Stadium, since its inception, has exceeded $200 million. In 2016, the Edmonton Eskimos announced a five-year field naming rights partnership with The Brick, a Canadian retailer of furniture, mattresses, appliances, and home electronics, to name the field “The Brick Field at Commonwealth Stadium” during CFL events.

The stadium is also a popular venue for musical events. “We’ve had a long history of running major outdoor concerts,” Fesyk says, “working with Live Nation, AEG, and other promoters for bringing concerts into the stadium –  from The Rolling Stones, The Police, U2, Pink Floyd, to some of the big concert events like Lilith Fair and EdgeFest. We’ve really established ourselves inside that concert goer market; last year we did Metallica and Guns N’Roses to the tune of over 45,000 people for each of those shows. So, we do a lot of live music. Our field has also been used for a number of FIFA (Fédération Internationale de Football Association) events – men’s and women’s soccer. In 2015, we were one of the host sites for the Women’s World Cup hosted across Canada.”

“We also do a lot of community-based events, as well,” Fesyk continues. “And we help some of our charitable organizations. There’s a large event called ‘Feast on the Field’ that we do with the Capital Care Foundation. It’s a fundraiser for all the work they do.” The Capital Care Foundation supports the needs of over 1,400, mostly elderly residents at 10 Capital Care centers throughout Edmonton. The 2017 event at the stadium raised over $45,000.

Commonwealth Stadium is a 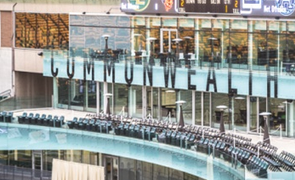 municipally-run facility, with about a dozen full-time operations and maintenance employees. “There are several other departments inside of our municipal structure that provide us with all of our trade support – electricians, plumbers, mechanical, painting, custodial,” Fesyk explains. “So, we’re probably anywhere from 20 to 50 employees onsite on any given day.”

Fesyk adds that he is currently working with those other city departments in several ways. “One is to change over all of our lighting, making sure we have the most efficient LEDs possible, to be able to provide both the quality of lighting that’s required inside the venue and for safety and security outside the venue, and also to help us reduce costs,” he states. “We also do a lot of work with the sustainability pieces within the city. We undergo regular audits on our environmental practices and we’re held to a pretty high standard. Anything that we can do, that we can investigate, we are doing at this point to try to make the stadium a lot more green, a lot more sustainable. We’re doing what we can to help divert garbage out of the landfills, recycling bottles that are left over in the stadium after events. We’re putting forth our best efforts in a lot of those areas to make sure that we’re at least on par, if not better, than most facilities our size.”

Fesyk also says that the stadium has worked with the Eskimo Football Club to increase the venue’s WiFi capacity. “We’ve put a lot of resources into that to be able to sustain connectivity and the signal strength that would be required when we have 50,000 people in the stadium for some of our major events. That was a big cost and a big piece of that came from the Edmonton Eskimos. And they have done a great job in developing their in-house app for supporting all of their game day and lead-up operations. A mid-bowl LED ribbon was also added in 2016 to enhance the overall fan experience and sponsor activations. So, we’re getting up to speed on all of our technological pieces and we’re taking a look at a lot of new and informative ways that people are utilizing their cell phones when they’re coming to an event, so that we can be better aligned from a ticketing standpoint, from a food and beverage standpoint, and from an overall customer satisfaction feel.”

Taking care of Commonwealth Stadium in the cold Canadian climate is a constant challenge, according to Fesyk. “A lot of work and effort has been put into keeping the facility looking the way it is,” he says. “But it is a 40-year-old facility and in terms of outdoor, open air facilities, that’s a pretty long life cycle. We have to work very hard on snow removal, ice cleaning; we have to do a lot of work to keep our turf in a usable condition. We’re the northernmost capital in Canada and, because of our climate, what we have to do to keep our facility up and operating is probably a lot more difficult. It would be nice if we could operate 12 months of the season, but with the weather that we get in northern Alberta, it’s very hard for us to do that. So, we do shut down the stadium at the end of the football season in November and we get everything going again, back early in May. So, there’s a lot of work for us to do between now and the beginning of May, when we’re going to be kicking off our 40th anniversary celebration.”

Luckily, for Commonwealth Stadium, its 40th anniversary year is likely to be as successful as its many predecessors. “We’re one of the highest drawing spectator stadiums inside the CFL and have been for decades,” Fesyk declares. “That’s a real feather in our cap. And because the people in and around Edmonton and Northern Alberta really support their CFL football club, and really support the events that we have, it allows us to remain relevant in the market. It also keeps us on our toes, because we need to keep ever evolving to meet the changing demographics and the changing needs and wants of the spectators as we move into the next few years. We’re always interested in bringing new and exciting live event options to the people of Edmonton and the surrounding area.”

WHO: Commonwealth Stadium
WHAT: An open-air, multipurpose stadium
WHERE: Edmonton, Alberta
WEBSITE: www.edmonton.ca/attractions_events/commonwealth-stadium.aspx 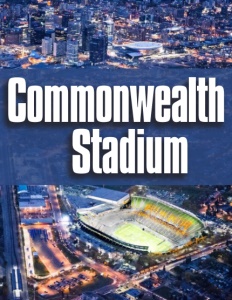