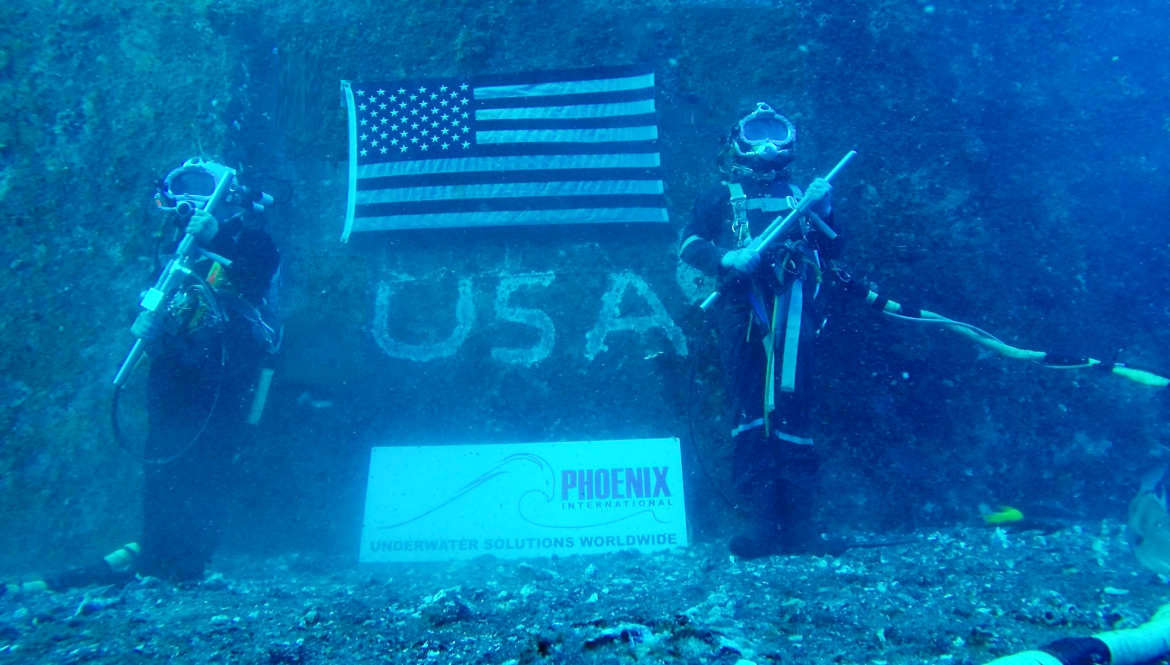 Within three years, Phoenix, deploying an internally designed and built 6,000 msw (meters seawater – a unit of pressure in underwater diving) depth-capable, remotely-operated vehicle, won several internationally competed contracts to search for and recover aircraft and rocket components from water depths to 3,000 meters. In 2001, this demonstrated capability resulted in the award of another five-year contract to perform search and recovery services for the U.S. Navy.

“Phoenix International is celebrating our 20th anniversary this month,” says Company President, Patrick Keenan. “We were founded in September of ’97, initially competing for the U.S. Navy Diving Services Contract. Winning this major contract was the beginning of our company that now has expanded into many service lines and a worldwide footprint. Basically, we are an underwater service provider. In addition to underwater repairs on Navy ships, we do those same types of repairs on commercial ships. We also provide submarine rescue capability for the U.S. Navy, conduct deep ocean search and recovery missions for military and civil clients, and we have an oil and gas division that performs inspection, repair, and maintenance of offshore infrastructure.”

Phoenix maintains and provides surface supplied air, mixed gas, and Nitrox diving systems to conduct underwater tasks from the surface to 300 fsw (feet of seawater). “We also have one-atmosphere suits in which our pilots can work at 1,200 fsw,” says Keenan. “We own and deploy remotely operated vehicles (ROVs) and autonomous undersea vehicles (AUVs) to locate and recover objects that have been lost in the deep ocean. We have an AUV that can dive to 5,000 meters and ROVs that can descend to 6,000 meters.  Among other projects, we have been on the Titanic filming; we have participated in the search and recovery for Air France 447; and we recovered the SS EL FARO’s voyage data recorder. So, our company has expanded significantly from its initial origins 20 years ago of being a diving service contractor solely for the U.S. Navy.”

Keenan credits this evolution and growth to a combination of planning and taking advantage of changing conditions and opportunities “We now have 235 employees,” he says, “and our locations are predominantly in the United States. Our headquarters are in Largo, Maryland, which is just east of Washington, D.C., but we operate from the major U.S. fleet concentration areas – Norfolk, San Diego, and Pearl Harbor. We also have a commercial underwater ship repair division in Fort Lauderdale, which was focused initially on the cruise industry, but now services tankers, bulkers, general cargo, container, and vehicle carriers. And we have offices in Bayou Vista, Louisiana, and Houston that give us access to the Gulf of Mexico. In addition to those U.S. locales, we have a joint venture in Perth, Australia with Infinity Subsea to market our atmosphere diving capability to the offshore oil and gas sector in Australia. We currently don’t have an employee there, but the JV is established and we fly people back and forth.”

One of the technologies that separates Phoenix Holdings from other underwater services providers is underwater welding. In fact, Phoenix considers itself the premier provider of underwater welding services, worldwide. They have 43 underwater welding procedures, certified by either a third-party classification society like the American Bureau of Shipping or Lloyd’s Register, or the U.S. Navy. They also employ some of the best underwater welders in the world.

“To be an excellent underwater welder, you have to do a lot of it.  So, if one of our welder-divers hasn’t been on a U.S. Navy project or offshore doing underwater welding for an oil and gas client for a specific period of time, we will put them in our test tank and they will weld. We will examine those welds and third parties will come in and perform nondestructive testing and, depending on the time interval, possibly destructive testing of the practice welds. So our welder-divers never stop improving their skills.”

Keenan says that Phoenix also works with marine salvage companies: “After a ship runs aground or suffers a collision a salvage company will perform the initial response. But the salvors may need some specific underwater repair accomplished prior to moving the stricken vessel to a port for dry-docking, and salvage companies hire Phoenix to conduct these repairs. We have seen instances where a ship has backed into something or ingested an object into a thruster tunnel, and then there is a stern tube seal leak or a damaged thruster and we can solve those problems waterborne. So, we have a long-term relationship with commercial salvage companies. We are very happy with that relationship and want to maintain it. In fact we are working in Asia for a multinational salvage company at this moment.”

Keenan reports that the mix of government and commercial contracts keeps the company very busy, and that its excellent work drives repeat business: “We have a very strong reputation with the U.S. Navy; we hold contracts for underwater ship repair, submarine rescue, and undersea ops. We maintain those contracts by constantly performing well and also improving our technology and our training as we execute. But we also want to expand into the commercial realm, both in the oil and gas and ship repair service lines. So, I think in the future, we would like to maintain our very strong U.S. Navy client base, but we will have expanded and have a larger portion of our revenue coming in from commercial clients.” 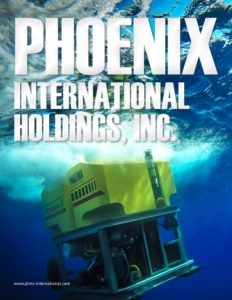