Pita Pit has definitely evolved from their initial vision, but there’s plenty more to come

When Nelson Lange started his company back on July 20th of 1995 in Kingston, a little college town outside Toronto, Ontario, he predicted success. But he was actually way off the mark. In a good way:
I’ve told this story probably a thousand times. I was dating my girlfriend, who is now my wife of fifteen years and we have four little girls together…I bragged to her and said that in the next ten years I was going to have ten stores. I was going to open one store a year…after seven years we had opened up 200 stores.

Lange mentions how the growth didn’t take much figuring out. After the success of his initial venture he took the next logical route. “What happened was it worked in the college towns,” Lange says. “We opened up in Queen’s University and so it wasn’t a big thought process: ‘Well, let’s open in another college town.’ So we opened in Peterborough, then up in Ottawa, then St. Catherine’s and Welland.” Sure enough, the train kept rolling.

After testing the waters in some border towns just south of Ontario, Lange says the perception began to change. “I think that as the brand matured, it got to a point where people were saying ‘I’d really like to get Pita Pit in 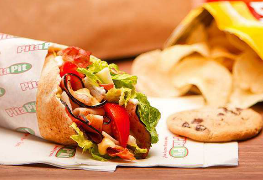 Chicago, where I’m working now. I used to eat it when I was in college and I miss it.”So the company took to the Walmarts and Costcos that would be busy all-year round, maximizing on the interest that they had been lacking during the college summer drought. The expansion paid out in spades. Now with over 500 stores globally to their name, operating in around 13 countries, Pita Pit’s new headquarters is Coeur d’Alene, Idaho and they erect about 100 new stores a year.“It took us 19 years to get to 500 and it’ll only take another four and a half to get to 1000,” Lange laughs.

Pita Pit doesn’t just cater to the college crowd anymore, but it hasn’t forgotten that ethos either. Lange talks of his stepfather who’s 65 and enjoys grabbing a pita as he goes from one meeting to the next, but the heart and soul of Pita Pit is about the customer making of it what they will. “The great thing about Pita Pit” he claims, “is you can eat as healthy as you possibly want or you can give it double Philly with extra cheese on it, for the guy who says ‘I just want the taste.’”

Who are they up against? For Pita Pit it’s all about location, location, location. “We’ve got a lot of competition with who’s located where,” says Kevin Sanders, the VP of marketing. He goes on to mention how it’s always been about even more than just a healthy or guilty snack fix:

We have so many options to customize products that [customers] can create a product that fits their nutritional needs. So if they’ve got food allergies or if they’re vegan, whatever they’re doing we have products they can use. So it really gives people versatility they can’t find in other concepts.

With such a fantastic business model, it’s a no-brainer that others would want to get involved in the booming force of Pita Pit. But the process isn’t as easy as just buying a ticket and getting in line. “I joke about this now but we could probably be at around a thousand stores now if we let just anybody that had $25,000 into the system.”

Pita Pit maintains 20 corporate stores to use as training centerswhere they hold “Discovery Days” with prospective franchisees, inviting them to a “two-way interview” as Lange describes it. “[If they] went and tried Pita Pit and loved it…that’s probably criterion number one with us,” he continues. “You have to love what you do. I have four little girls and I couldn’t promote hamburgers or hotdogs or French fries, because I don’t really believe in them.”
Lange admits the process is tough. Around 85% of

applicants get rejected, but he says to hit the ground running you need mutual respect and love for the brand. “You’re dealing with the fact that someone might not show up at 11am to a shift on a Saturday afternoon and you have to put a hat on and miss a wedding because it’s your franchise, it’s your baby.”

Still, they don’t want to discourage anyone from getting interested if the passion is there. Lange jokes about the old days, saying “The original franchisees got a few days of training, a handshake and a good luck.” But times have changed. Pita Pit is very invested in the brand and if people want to succeed, they will do what they can to make everyone succeed together. When asked if applicants need specific background experience or education, Kevin Sanders brushed off the notion. “No we don’t have any of that. It’s a very accessible brand. As Nelson said, it’s about the effort you’re going to put into it. If they’re motivated, we’ll teach them how to do it.”

With all the positive momentum surrounding Pita Pit, the only place to go is up. Fittingly, that’s exactly Lange’s goal: “[We’re wondering] what the next twenty years looks like and that’s biodegradable napkins and straws; thinking about the environment globally,” he says. He talks about some benchmarks they’ve already laid down. “We’ve done water-refuelling stations in London, England; reclaimed barn board on the counters and high-efficiency light bulbs…we have to think about what we’re leaving this planet like after we’re gone. We’re all family people here with children and that is important to us moving forward.”

At the end of the day, every business has one nugget that is their key to success. When asked about his own, Lange lays it out matter-of-factly. “I think number one is the culture of our company and we can’t lose who we are. From the top to the bottom, it doesn’t matter who, we’ll get behind the counter and roll pitas.”

WHO: Pita Pit
WHAT: Pita restaurant franchise
WHERE: over 500 location in 13 countries
WEBSITE: www.pitapit.com 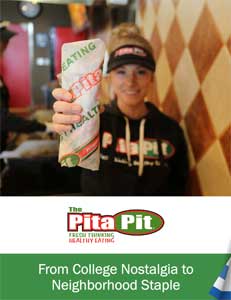