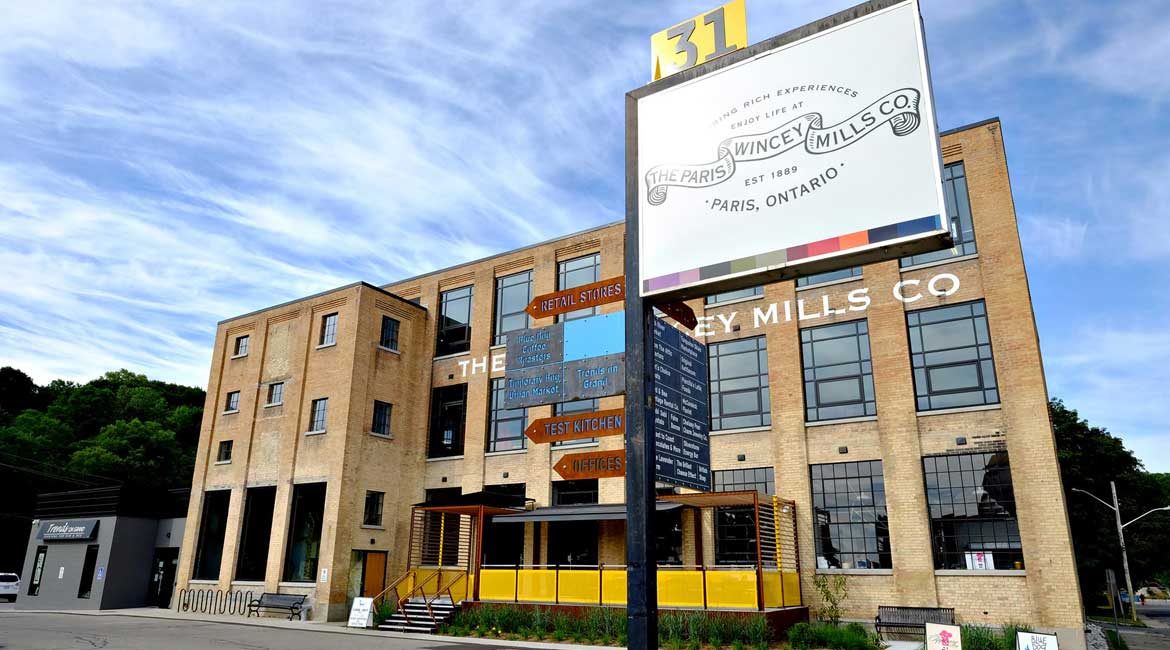 It’s a bleak, cold January day. Outside. But it’s warm and toasty in historic downtown Paris, Ontario. I’m writing this onsite at the Paris Wincey Mills Co. indoor market hall – seated at a long, pine table in the open common area, surrounded by the buzz of coffee chatter, tantalizing aromas of lunch sizzling on the grill, jazzy piped-in music, volumes of spring flowers, and everywhere laughter, and movement, and positivity. This is what downtown heritage revitalization is all about. Resurrecting a gathering place that the entire community can profit from and enjoy.

Idyllic Paris, Ontario was named for its gypsum beds, the major component in plaster of Paris and a key contributor to the town’s early growth. But it was the textile industry that emerged in the late 1800s as the major employer and economic driver. The mills were an integral part of life in Paris, many company executives playing prominent roles in town affairs. During the Great Depression in the 1930s, the Wincey Mills and Penman’s mills operated at full capacity day and night, producing, among other necessities, socks, underwear and Canadian military uniforms. In 1934, when times were most dire, Wincey Mills increased their workers’ wages. Unheard of in that era.

In case you’re wondering, “Wincey” is not a proper name, but a word describing a twilled fabric of wool and cotton. The original Paris Wincey Mills complex was constructed in 1889 in the downtown core near the confluence of the Nith and Grand rivers; an advantageous location for harnessing waterpower. The plant opened with 25 employees and quickly grew to 125, adding an additional mill to the site in 1916. In its heyday, the Paris Wincey Mills Co. distributed high-quality textiles from Halifax, Nova Scotia to Victoria, BC.

In 1959, with the war long over and orders for cloth goods dwindling, a local newspaper reported impending closure of the Wincey Mills. That prompted a bid from a Listowel-based company that purchased the mills and began producing yarns for Spinrite Yarns and Dyers. When that entity ran its course, the facility was taken over by Canadian Tire, and reincarnated as a franchise store and automotive service center.

The three-story building was left vacant in early 2013 when Canadian Tire relocated to a modern, single-level facility. At that time, the Wincey Mills building was under threat of demolition to ease the town’s increasing need for more parking. Paris was becoming a bedroom community for the Greater Toronto Area (GTA); real estate was booming, new home construction was rampant, the industrial base was growing, and a steady stream of families were moving to this scenic, affordable community. That growth continues to swell in all sectors, tourism is flourishing, and heritage revitalization is a priority in the historic downtown landscape.

In 2014, rumors were still swirling about the fate of the empty Wincey Mills building, when brothers Arie and Walter Koppelaar (Walters Group construction) purchased the site under their management company Wingbury Properties Inc.. A private family company, Wingbury generally deals in new builds, but Wincey Mills is a “pet project” said general manager Geraldine Bolle. “One of the owners said there were so many amazing features in this building, that they wanted to take it on.”

Nick Koppelaar (Walter’s son) and Jessye Grundlingh, founders of Toronto design firm Area 91, embraced the project, from full-concept drawings to bespoke furniture creation. Their vision of “creating a community gathering spot” was realized in every way. Of special note: the outdoor patio, boasting vibrant yellow accents that make it ‘pop’ from a block away on the main street.

Epitomizing industrial chic, the building redesign maintained as much original character as possible. Though, the fact that it stands on a designated flood plain was a serious consideration in the plans. Construction Manager Peter Van Brugge led the project from demo to opening day, and speaks to the unique challenges of the restoration.

“The biggest challenge on the Wincey Mills project was ensuring that the structural components (mostly roof and floor beams) were adequate to take the new loads. The challenge was to hide the upgrades so they would blend in with the old structure. To do this we used mostly bent plates and structural channels, and thru bolted everything.”

The century-old hardwood floors were brought back to life, and fabulous, 70-pane windows (thankfully, covered for protection during Canadian Tire’s ownership) were restored to bring in scads of natural light. Van Brugge adds, “The old elevator shaft was refurbished and reused. The back wall of the elevator is now a glass wall, so passengers can view the old brickwork and windows as they go up and down. We also used some of the old fire doors, industrial shafting and antique electric motors as decorative elements to tie in the history of the building.”

The Paris Wincey Mills Co. is now thriving with 15,000 square feet of office space on the second and third floors, offering a modern work environment with build-to-suit workspaces and expansive views of Paris and the Grand River. The ground floor features retail tenants, the indoor market hall, a restaurant/cafe, and chef-worthy test kitchen (partnering with local businesses for events). There is also a seasonal outdoor market, and there are plans for future development in the basement area.

Community Relations Manager Francine Tausney begged to have her own office open onto the indoor market, close to the ‘action’. An area adjacent to the elevator was perfectly suited. “Working with designer David Powell (Powell & Bonnell), a Paris native who has a studio upstairs, we incorporated the existing brick walls, a frosted glass wall, and vintage elevator slat doors that are folded back on a track during the day and closed at night for security. My office doubles as a storefront, selling the work of local artisans, and Paris Wincey Mills Co. branded merchandise. The original 19th-century logo is used in all our marketing to respect the great past of this building. And we’re constantly adding exclusive products to promote the brand in the community and beyond to tourists.”

The temptation in these old factories is to drywall over everything and start fresh. But the Wincey Mills chose a different route. They cleaned and sealed the bricks, but left the distressed paint finishes intact – along with old notes and autographs people had written on the interior walls and structure through the decades. They were preserved under a clear coat for posterity, and make great conversation starters.

Kathy Ward from Broken Arrow, Oklahoma, recalls a story her father told her from when he began working at the Wincey Mills in 1958, at the age of 15. “He was given a bucket and told to fetch a bucket of steam. His official title was “Steam Collector”. After a few minutes of searching for steam and receiving laughter from those he asked, he soon realized that this was a joke; an initiation so-to-speak that was commonly done to new employees at the Wincey Mill.” I wonder if he signed the wall?

Where once huge windows had been blocked in over the years, the designers approached the local museum for historical images of the town they could reproduce to cover the setbacks. These floor-to-ceiling sepia photographs now have pride of place in the market hall.

Purchase and renovations of the Wincey Mills property, which officially opened in May 2016, came in around $3 million. Restoration can be a pricey undertaking, and a daunting prospect to consider in budget deliberations. However, as Van Brugge says, “While renovating a building such as the Wincey Mills ends up costing more than building new, the character and ambiance can’t me matched by new construction. The ‘old building’ really seems to bring the people in.”

If your community is debating whether to repurpose built-heritage assets, Tausney relates a story that sums it up beautifully. “It was after the Remembrance Day ceremony at the cenotaph. The market hall was filling up with people, and an old guy – a war veteran proudly wearing his medals – came in and found a seat. A young boy, maybe seven years old, sat down beside him. They’d never met, but soon starting chatting about chess. They’d found common ground, even making plans to get together sometime for a chess match. We’re even thinking of adding chess and checkers tables. This is what it’s all about. A familiar space with a rich past, where locals and visitors can meet, shop, learn, work, and share.”

Once a workforce gathering place, the Paris Wincey Mills is a bustling community hub once again. Still contributing to the town coffers, still a hive of downtown activity, this architectural legacy has a wealth of stories to tell.

This feature was written by our Business View Associate Editor and Social Media Director, Lorie Steiner. 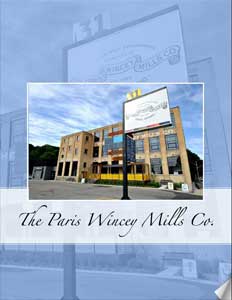