Business View Magazine interviews representatives from AIT Bridges, as part of our focus on best practices of the American construction sector.

According to the American Road and Transportation Builders Association, there are about 614,387 bridges across the United States. Today, 245,000 of them are older than their 50-year intended design life; of those, about 235,000 are in need of rehabilitation or replacement; and of those, some 47,000 are structurally deficient and in immediate need of replacement. But bridge replacement doesn’t come cheap. The most recent estimate puts the nation’s backlog of bridge rehabilitation needs at $123 billion.

While the infrastructure sector continues to await the federal funding that will kick-start a wave of new construction, a recent entry into this potentially burgeoning marketplace is AIT Bridges, a division of Advanced Infrastructure Technologies, and, today, the leading provider of innovative and low-cost, composite bridge solutions.

AIT started as the brainchild of Dr. Habib Dagher, a Professor of Civil/Structural Engineering at the University of Maine’s Composite Research facility, who came up with the product line after years of research and development work, and with the support of the National Science Foundation, the Department of Defense, the U.S. Department of Transportation, and the Army Corps of Engineers, among others. 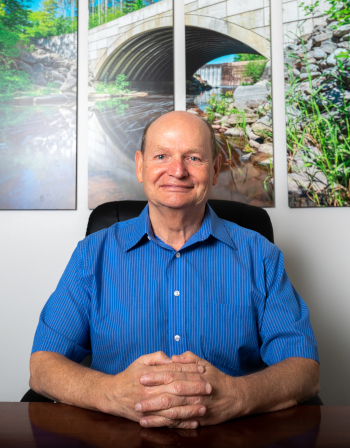 The Composite Arch Bridge System is AIT Bridges’ first product and service offering. The system consists of fiberglass reinforced plastic (FRP) tubular elements, FRP decking, and a headwall supported by cast-in-place or precast footing. “We discovered the product in ’08 as they were building the first demonstration bridge,” recounts Company Co-Founder & CEO, Brit Svoboda.  “I liked this product and we were able to negotiate a license agreement. We formed a company and that was the beginning of Advanced Infrastructures Technology, Inc. The first Composite Arch Bridge was built in 2008 and, today, there are more than 25 of our Composite Arch Bridges built around the world.”

Another AIT product is the CT Girder System – a long-life solution to traditional steel and concrete, medium-span deck bridges. The system consists of lightweight FRP tub girders that are simply supported on standard foundations with precast panel or cast-in-place concrete bridge decking. Atlas Decking is an FRP composite product that eliminates the need for a concrete deck, altogether. This lightweight decking panel can be manufactured to any length, and is easily attached with self-tapping screws to the composite arches and support backfill.

Finally, there is AIT Bridges’ cost-effective, Mobile Composite Manufacturing Unit (MCMU) – a self-contained, 20-foot, standard shipping container that is fully outfitted with all the tools and equipment necessary for producing the primary structural members of the entire system. The MCMU allows for local and scalable manufacturing at a low capital cost. “We are building bridges in a different fashion; in a different way,” Svoboda states, “with advanced materials which eliminate corrosion and either eliminate, or reduce dramatically, maintenance factors, therein.”

Today, AIT Bridges has one operation in Brewer, Maine, ten employees, and perhaps another ten, hired as needed for operations, manufacturing, or processing. If that seems small, it’s because it has taken a fairly long time for the company to get its innovative technology approved and the business up to speed. “We were bringing new innovation into the market,” Svoboda explains. “So, we had to go out and search for national approval, which we did in 2013-14. That was the first step. The public sector – federal and state governments, counties and municipalities – that’s the bulk of the bridge industry. And no state or federal agency wants to buy a product unless it’s nationally-approved. We had to go through an approval process and create market awareness that led to market acceptance, all of which took some time.”

“During the approval process,” he continues, “we spent a lot of time in Washington, DC with the Federal Highway Administration, the U.S. Department of Transportation, congressmen and senators, trying to solicit support, or to work on legislative issues that inhibit innovation because of the old ‘sole source’ issue that says that the government can’t bid out anything unless is goes to three bidders with a like product, and innovation, by definition, is a ‘sole source’ product. So, we had to change laws and rules and regulations during that time.”

And now, not only has the law been changed to allow for innovation to come to market, new legislation has eliminated proprietary products. That means that AIT Bridges can bid against steel, concrete, and even wood. “We all get to bid it,” says Svoboda. “It’s whoever’s got the best program for what needs to be put in that location. It opens up competition and it allows for different solutions.”

“There was this ancient rule that limited using patented or proprietary products in infrastructure,” President and Chief Engineer, Ken Sweeney, elaborates. “Every new innovation or new idea that comes out from private industry is protected in some way or another. Federal Highway realized that this was really an impediment to innovation. Different materials can compete against each other, and that was what they weren’t seeing. If we were allowed into the bidding, the worst thing that will happen is that prices will go down, because everybody is competing. They saw the opportunity to get better performance and higher quality and also, maybe, reduced cost. So, they rescinded that rule, which opened things up. And it leaves decisions up to engineers to decide whether something is going to be used to perform the functions that it’s laid out to do. So, everybody wins with this.”

By all appearances, AIT’s lobbying was extremely effective. Not only were laws changed, but Svoboda picked up some heavy hitters along the way. Gregory Nadeau, head of the Federal Highway Administration in the Obama administration joined the company’s Board of Directors; and the Deputy Secretary of the U.S. Department of Transportation, Victor Mendez, as well as several secretaries of U.S. states, have joined its advisory board, “because they realized this is a great idea,” Svoboda avers. “We’ve all come to the same conclusion: we can’t keep building bridges that rust out and corrode and take a lot of maintenance. We can’t keep doing things over and over and expect different results. There’s got to be a better way. The country has been calling for building things that last longer. We can build a bridge that lasts 100-150 years and we can’t build anything less than that.” 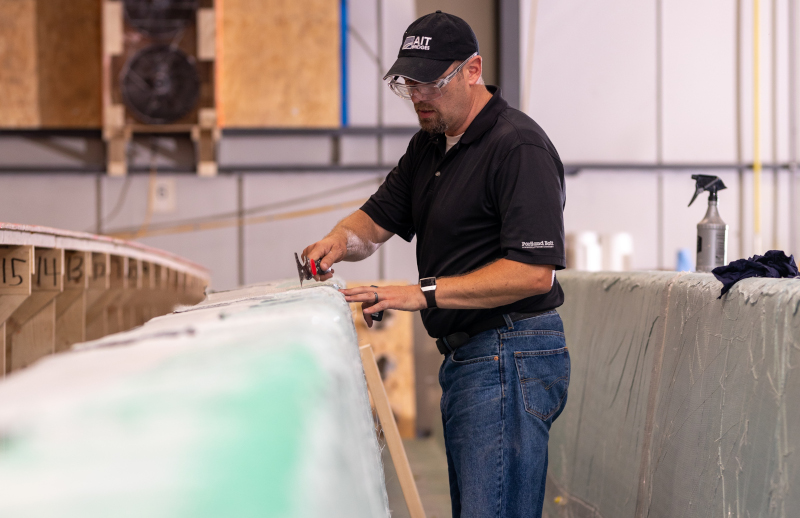 Thus, according to Svoboda’s reckoning, the company has finally hit an “inflection point.” “We’re raising capital and we’re about to hire somewhere between 40 and 50 salespeople over the next two or three years, and then 20-25 engineers and, of course, operational people as we build our bridges. We have a strategic partner building with us in Buffalo, NY to handle the Midwest, and we’re in negotiations with groups in the south and groups in the west to also come up with additional strategic partners that will be able to build our technology on a more regional basis.”

So, it’s all systems go at AIT Bridges. “The company is finally at a point, with enough market awareness, acceptance, and approvals for utilization of this innovative technology, that we now need all those salespeople and trained technicians and engineers to bid and chase that kind of work,” Svoboda says. “They don’t come to you; you have to go out and bid them up. They’re out there, and now we need the sales force to go with the momentum that has evolved over the last six or seven years with demonstration models in multiple states and attending conferences, lunch-and-learns, trade shows, and so on, to educate the market that this project is available, and how, when, and where to use it. Then, we have to sell, individually, to these customers. Bridges coming up for bid – the sales cycle is 18-24, sometimes 30 months from start to finish.”

And even though AIT will be bidding against the larger legacy industries of steel and concrete, Svoboda neither expects, nor wants, to drive the competition out of the marketplace. “We’re just looking to pick up our fair share of composite industry market,” he states. “There’s going to be a huge market increase over these next ten, twenty, or thirty years. Increased spending and increased aging and deterioration of bridges are going to open up a huge market for all of us. So, there couldn’t be a better time for introducing an alternative way of building bridges.”

Indeed, if anything, Svoboda actually wishes to drive his competitors to “up their game” and then, work with them: “It’s not a matter of driving them out of business. If they can up their performance level, we’ll all be on a level playing field. I think it’s good for the whole industry and good for the whole country. Steel guys can produce longer-lasting steel – it costs more, but they can improve their performance level. So can the pre-cast concrete guys by using GRP (fiber-reinforced) rebar, or CFRP (carbon fiber reinforced polymer) type of products that would not corrode inside the concrete. So, we think there are complementary opportunities to work with the steel industry and the concrete industry and work with better reinforcement materials.

“Our arches are 99 percent concrete; it’s just that our shell is composite material for reinforcement and for stay-in-place forms, and for protection from the elements. So, we’re just taking certain products that we can help make better. We add ductility to concrete by putting it inside our arches, and we take away some of the brittleness as a result. Half of our girder system is still going to be precast or cast-in-place concrete. We’ll look to do our bridges with CFRP or GRP rebar so we can eliminate corrosion in the decking material, but half our bridge is going to be precast concrete. So, there’s a hybrid opportunity for us all to work together. At this point, there’s a huge market out there. So, we don’t have to go out and steal market share from steel or concrete or wood; the market is increasing dramatically, because we’re aging out of bridges faster.”

While AIT Bridges is hoping to work with the other bridge building industries, Svoboda believes that the company has distinct advantages that place it squarely ahead of other composite manufacturers. “There are no other bridge companies,” he reports. “We’re the only nationally-approved, full composite bridge system in the country, right now. What we do have is a lot of competition that has parts, pieces, and components that they can sell to the industry.  There are plenty out there that can bid a girder, but can they engineer, design, and fulfill a bridge?

“We are a bridge and structure engineering company that happens to use composites for its solutions,” Svoboda declares. “We design and engineer and provide solutions to the market. We engineer structures and use composites as the advantage. We are a solutions providing entity trying to change the way things have been built in the past. With our technology, we’re able to provide solutions that, perhaps, others cannot.”

WHAT: A provider of innovative and low-cost, composite bridge solutions