The Des Moines International Airport – A great place to be

A great place to be

Business View Magazine interviews representatives from the Des Moines International Airport as part of our series on regional American airports.

The Des Moines International Airport is a public use airport, located three miles southwest of the City of Des Moines, in Polk County, Iowa. It was originally constructed in 1932 with two 1,800-foot runways on 160 acres of farmland. The Airport’s first passenger terminal was built shortly thereafter, then replaced by a new terminal in 1950, which, itself, has been expanded and renovated several times over the years. Today, the Airport covers 2,625 acres, and its two runways have been lengthened to just over 9,000 feet, each.

The Airport was originally governed by the City of Des Moines’ Parks Department. The Airport was renamed the Des Moines International Airport in 1986, to acknowledge the presence of a United States Customs Service office on property, and in 1993, the Des Moines International Airport Board was established for the purpose of governing the operation of the Airport. The city retains ownership of the land but transferred title to all property and equipment to the public authority. In turn, the authority has agreed to a 99-year lease on the land. The Airport employs a staff of 58, and according to a 2014 economic impact study, generates $644 million in annual economic output.

“We know it’s much higher than that, today, in large part because our passenger traffic is much higher than it was in 2014,” says Executive Director, Kevin Foley. “We have six flag airlines coming in and out; we have all three levels of air service, today. We have the three legacy carriers – American, Delta, and United; we have one low-cost carrier – Southwest; and then we have two ultra-low-cost carriers – Allegiant and Frontier. So, we’re pretty well situated as far as the levels of air service that we have.” 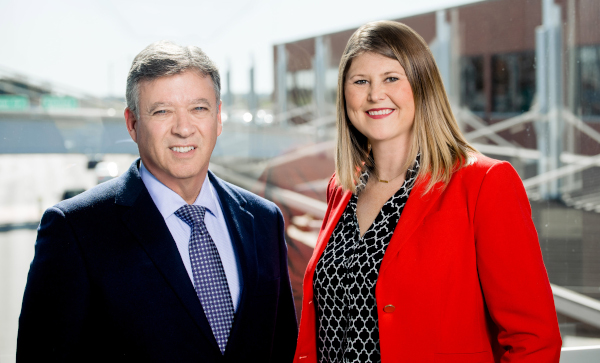 Regarding competition with nearby commercial airports, Foley relates, “We just completed a market study, or what’s otherwise known in the industry as a ‘leakage’ study. Within a 90-mile radius, we retain 70 percent of all of the traffic that we should have in this market. Within 50 miles, we’ve stopped all the leakage. The majority of our leakage is to Minneapolis, about a three-hour drive from Des Moines, and certainly, our market areas abut up against each other and, in fact, overlap. The other two airports we’re in competition with are Omaha and Kansas City. Kansas City is about a three-hour drive away; Omaha is about a two-and-a-half hour drive away.”

The Des Moines Airport is also home to the 132nd Wing of the Iowa Air National Guard, and both FedEx and UPS transport cargo in and out of Des Moines International. Approximately 115 general aviation aircraft – private and corporate – are home-based there, as well. “We used to have a waiting list for hangar space, but we constructed new hangars in 2018,” Foley notes. “So, today, we have three hangars available for rent. They are T-hangars with a couple of box hangars on the end for small corporate aircraft. As we get ready for the new terminal we’re trying to build, we needed to move some buildings, so we built new hangars in one location, tore down some buildings in another location, and we built some extra at the same time.”

Regarding other ongoing projects, Foley adds, “I had a boss who once told me that a well-managed airport will always be under construction. We are in the process of wrapping up a complete reconstruction of our primary runway. We took it all the way down to the base and brought it back up. We have an Airport Improvement grant for Phase 1 of reconstruction of the crosswind runway, and that will begin in the spring. But, we’ve been working on pavement, be it our primary parallel taxiway, or the runways, since 2010.”

“At the same time, we are rearranging our Airport on the south side,” he continues. “Originally, it was basically cargo and some light GA facilities down there. We have split the cargo ramp that was put in around 2000; it’s 26 acres of very heavy pavement. As air cargo has declined in the United States, the ramp was underutilized. We will be moving Signature Flight Support, one of our two FBOs, and one of our specialized aeronautical service operators on the field, Des Moines Flying Service, from the vicinity of the existing terminal down to the south side of the building, and they will be utilizing the other half of the ramp. All of that construction has been going on for the last three years, now, and it will be completed by this fall. Then, the area around the terminal will be completely open so that we can actually start construction on what we call the east quadrant here at the Airport, and start the terminal project, itself.

“All of the construction, except for the runways, is part of the terminal project. Originally, the cost on that was $500 million and everybody assumed we were building a $500 million terminal and that’s not true; it’s the movement of all these facilities and getting everything situated the way it should be. For the actual terminal itself, design is slated to begin in 2024; construction starting in 2026; and completion in 2028. Through this terminal project, we will have space available for corporate aviation development or for commercial cargo operations.” 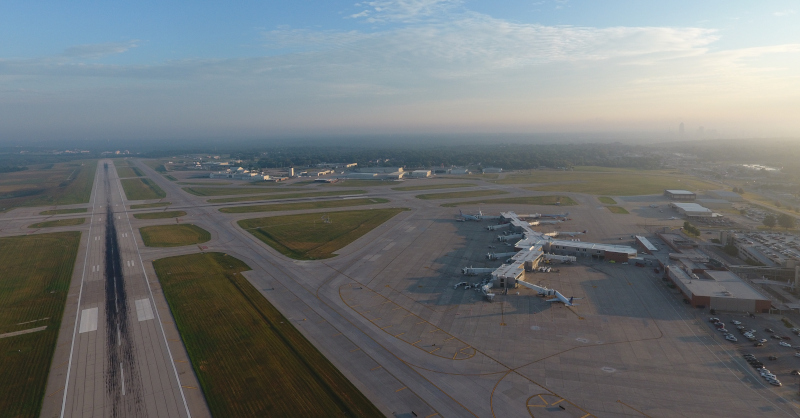 David Maahs is the Executive Vice President of Economic Development for the Greater Des Moines Partnership. With 22 connections to major airline hubs and leisure destinations, Maahs sees Des Moines International as the city’s connection to the world, and a new terminal is paramount to maintaining its leading position as a true international facility. “It’s our global front door,” he states, “and it’s important for us to have an airport for our business community with excellent service, direct flights, a number of different carriers to utilize, plus a very modern and appealing airport that has capacity to grow. We have some real constraints at the Airport, right now, and desperately need a new terminal.”

While the new terminal is still several years away, Kayla Kovarna, the Communications, Marketing, and Air Services Manager has the responsibility of continuing the Airport’s healthy rate of growth, which clocked in at 8.4 percent, this past year – more than double the projected 3 percent and well ahead of the national average. “We’re on track to have a record-breaking year, this year, with three million passengers; we’re expecting to hit that by the end of 2019,” she reports. “Overall, people are going to use us if the airfare is affordable, if there’s good connectivity, and if we’re keeping it convenient for the traveler. So, right now, our marketing strategy is really focused on that good customer experience and making sure people know that, so they keep coming back to our Airport.”

Foley believes that part of the Airport’s success is due to the strong economy in Iowa, as well as its strategic location. “Des Moines metro is the largest metro in the State of Iowa, so Des Moines Airport is the largest airport in the State of Iowa, by nature of enplanements, general aviation activity, and just about any other matrix,” he states. “We’re the capital city, so we’re the capital city airport.”

Maahs agrees: “We’ve been fortunate here in the Des Moines metropolitan area in terms of employment and population growth. Since 2010, we’re leading all the major Midwest cities. For example, since 2010, our population has gone up 15.1 percent. The next closest city in the region is Omaha at 8.9 percent; Minneapolis at 8.4; Kansas City at 6.7; Milwaukee at 1.3; St. Louis at .6; and Chicago at .4. We’ve got a good mix of industries; a very strong financial services center; a big insurance center; and also a number of leading agricultural companies located here with major operations.”

“There’s something really genuine about Iowa and we see the Airport as the gateway to the heart of the Midwest,” says Kovarna, in conclusion. “We have a lot of incredible partners, like the Greater Des Moines Partnership that is focused on assisting us in our vision for the new terminal. It’s going to help drive business growth, foster business development, while also providing travel for fun and adventure outside of our great state. It’s a great place to be.”

WHO: The Des Moines International Airport