Land between the lakes

Known as “The Land Between the Lakes,” the City of Albert Lea embraces the shores of Fountain Lake, Pickerel Lake, Albert Lea Lake, Goose Lake, School Lake, and Lake Chapeau, which makes it a haven for enthusiasts of boating, fishing, canoeing, and outdoor activities of all kinds. Transportation-wise, the city is located at the crossroads of Interstates 90 and 35 in southern Minnesota, about 90 miles south of the Twin Cities (Minneapolis/St. Paul), which also puts this business-friendly, welcoming city at the crossroads of growth – in terms of population, economic development, and the expansive vision of the community at large.

The city’s origin hearkens back to 1835, when Companies of the United States Dragoons came through Freeborn County. Among the troops was topographer Lieutenant Albert Miller Lea, who sketched the outline of the lake he dubbed “Fox Lake,” which would later be renamed Lake Albert Lea in his honor. In 1855, a small settlement began on the northwest edge of the lake and became known as Albert Lea, after the lake. By 1880, Albert Lea’s population was 1,966 individuals. Today, it is a flourishing community of over 18,000 residents.

As in many U.S. towns, Albert Lea’s manufacturing base has substantially diminished and the city is now making strategic investments towards a healthy, sustainable future. Business View Magazine recently spoke with Mayor Vern Rasmussen, Jr.; Assistant City Manager, Jerry Gabrielatos; and Noelle Hagen, Assistant Executive Director for Albert Lea Economic Development Agency (ALEDA) about those initiatives. The following is an edited transcript of that conversation. 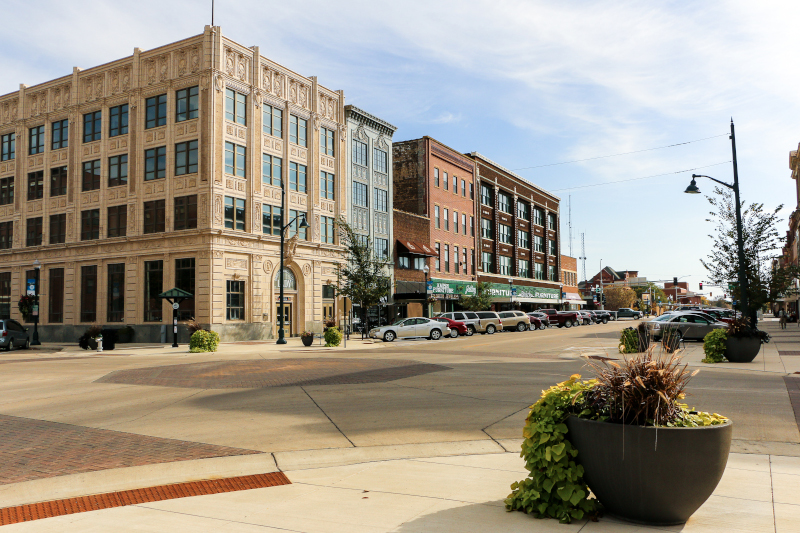 building in the foreground is the Freeborn Bank Bldg and is now occupied by Mortarr. Photo by Teresa Kauffmann

BVM: Can you give us an overview of the city’s goals?

Rasmussen: “The City of Albert Lea is working hard to continue to grow and take care of our infrastructure needs. We’ve implemented a well-planned, 10-year CIP (Capital Improvement Plan) and we dedicate ourselves to following it. We want to be the community where you can be successful at whatever you want to do, whether it’s to live, to work, or to play here. So, we’re trying to find ways we can be competitive in each one of those realms.

“We recently delivered a very successful Minnesota State Fishing Opener, where we hosted the Governor and his staff and several legislators, and put on a big party to celebrate what is a great industry for us – and that’s tourism. Fishing tourism in Minnesota is a $2.3 billion industry, so this acknowledges that and sets it off for the whole state. It’s a big media event; we hosted many of the major players in town who were covering the opener. We also used that time to capitalize on some of our other amenities, like our historic downtown. It gives the journalists an opportunity to experience that.”

BVM: What type of infrastructure projects are in the works to promote tourism?

Rasmussen: “One of the main projects we’re doing right now is dredging – reclaiming Albert Lea Lake Fountain and cleaning it up; taking care of some of the issues with algae that has taken over, so the lake is more of a destination again. We’ve secured about $7.5 million from the State of Minnesota to help us with that project. We voted for a .5 percent sales tax in our community in 2005, with an 80 percent approval rating. Ten years later, we voted it in again with a 72 percent approval.

“We just finished reclaiming our historic downtown; investing about $4.5 million to revitalize the streetscape and make it a more inviting environment for people. We’ve seen a dramatic increase in activity down there – over $3 million of private investment in the downtown since we finished that streetscape, which has resulted in 12 brand new businesses coming to the core area. We actually added a big splash pad to the end of the road – it’s a great attraction for all ages to enjoy. Our pedestrian numbers have increased quite a bit downtown, which has been a benefit to all the businesses.

“Those are some of the big projects, and we’re progressing on from there. A huge fire in 2001 destroyed the Farmstead and Farmland facility, one of our major employers, and that left a large vacancy of 40 to 50 acres in the middle of our community. It sits empty at this time, but it is a redevelopment opportunity that we’re now starting to go after. We made investments to take care of downtown and this is our next goal – what we call the Blazing Star Landing. We’re currently trying to market that land and push the developers to see it as a destination. There are walking trails going into that area, bike trails, and it’s also surrounded by the lakes and the channel. So, we’re trying to incorporate those amenities in a marriage between public and private; eventually, looking at building a community center to help the growth of visitors to that area.”

Gabrielatos: “We’re unique in Minnesota – ‘Land of 10,000 Lakes’ – because we have a recreational lake within shouting distance of a lake known for birding and hiking that also has a state park. It provides a unique opportunity for residents and tourists to take a boat out on Fountain Lake and then go hike around Albert Lea Lake, as well. We’ve got a lot going for us here and we’re proud of the work we’ve done.” 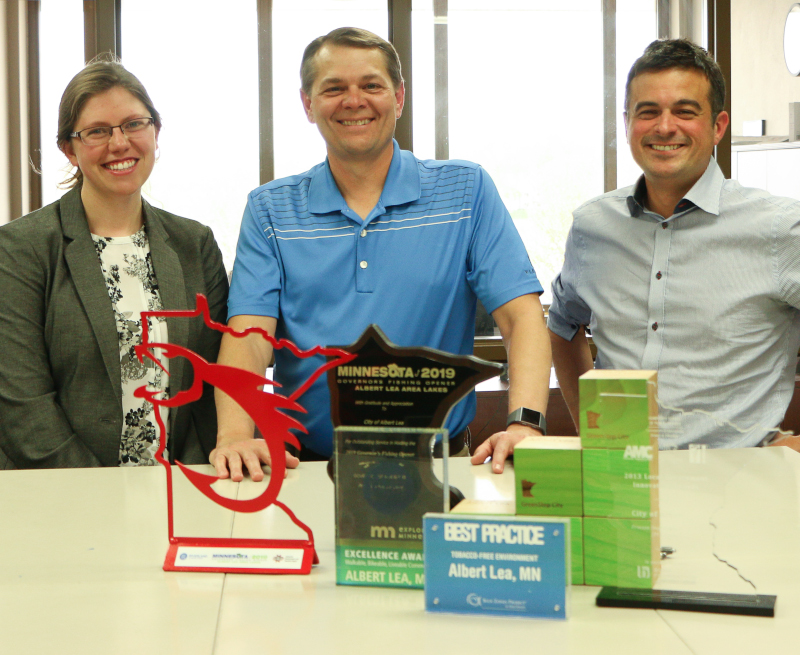 BVM: How do you retain business and attract new companies?

Hagen: “Albert Lea is a heavy manufacturing community. Our major employers are food manufacturers and their suppliers, and also industrial clients: metal working and higher tech companies. Our economic development agency (ALEDA) owns several buildings that are close to 100-percent tenant occupancy. We continue to work with our industrial clients and our schools to make sure young people in the community are interested in the types of jobs we have here, and that adults are aware of available opportunities. And we’re doing long-term planning for attracting new businesses that complement what already exists in Albert Lea.”

Rasmussen: “What’s unique about ALEDA is that it incorporates a public and a private piece. The public part is the Albert Lea Port Authority and the private part is Greater Jobs, Incorporated. ALEDA is located in the Albert Lea Business Development Center which assists entrepreneurs and local start-up businesses through a business incubator. Over the last several decades, ALEDA has been active in constructing buildings, leasing them back to tenants and, at times, selling them to companies. That’s one way we’ve been effective in attracting businesses to Albert Lea.”

Gabrielatos: “There hasn’t been an operating tax levy increase in eight years, and during that time we have built a public works building, an airport, and we are just starting to build a new fire station. In terms of housing, we offer a tax abatement program for any new residential construction. In 2018, we also secured a grant for repurposing of a former school into market-rate apartments for rental. And to encourage investment, we just completed a housing study. One question we get from developers is ‘what do you need?’ And the housing study is a good map for those folks to read prior to investing.”

BVM: What initiatives do you have from a sustainability standpoint?

Rasmussen: “We were the pilot city for a global Blue Zones initiative to make it easier for people in the community to live healthy. As part of that, we’ve added nine miles of sidewalk and recently passed a Tobacco 21 policy (no one under 21 can purchase tobacco). We’ve decreased our smoking rates significantly and  been recognized around the world for the many different accomplishments we’ve had as a Certified Blue Zones Community.”

Gabrielatos: “We’re also a Green Step City. The Green Step program was designed by the Minnesota Pollution Control Agency to help cities reach their sustainability goals. We enter data into it frequently and that monitors ways we can make the city cleaner and greener. We’re also awaiting review of our application for the Main Street Program. We’ve made a lot of progress with our downtown and I believe that enrolling in this program will help us sustain that progress because it uses pillars to propel cities forward. So, we’ll be starting that program very soon.”

Rasmussen: “Albert Lea has one of the largest historic downtown districts in Minnesota. Two years ago we hosted the statewide Historic Preservation conference to showcase the preservation efforts we’ve pursued as a city. There’s a large heritage building downtown – the crown jewel – that was vacant for 20 years; the city invested $2.2 million into restoring it and now we have a local web-based company called Mortarr that has renovated it and is taking control of it. We sold them the first two floors, and they have first refusal to buy the top two floors, over time, as they need them.”

The City of Albert Lea has so much going for it, including a superb quality of life and a wealth of natural attributes. As Mayor Rasmussen sums it up, “We are a community that’s looking for opportunities and for reasons to succeed, not reasons not to.”

Main feature photo at the top by Teresa Kauffmann

What: County seat of Freeborn County; population around 18,000

Brunton Architects & Engineers designed a new 25,560 s. f. precast fire & rescue facility for Albert Lea.  This project boasts 12 apparatus bays, a hose/training tower, a training room, an emergency operations center, offices, living quarters, a fitness room, and a pressurized SCBA room. The project is estimated to be complete in the summer of 2020.