Rural Municipality of Hanover, Manitoba – All about the assets

All about the assets

Business View Magazine interviews representatives of the Rural Municipality of Hanover, Manitoba, for our focus on Best Practices of Canadian Municipalities.

The Rural Municipality (RM) of Hanover, Manitoba enjoys an enviable reputation as a great place to live, work, and raise a family. Located adjacent to the City of Steinbach, and a short drive to Manitoba’s capital City of Winnipeg, Hanover is a long-time agricultural hub that leads the province in the hog, dairy, and poultry sectors, and employs many area residents, either directly, or in agricultural businesses and support services.

Replete with an extensive, well-developed transportation infrastructure that includes the Provincial Highway system and links to major exporting routes to the south, east, and west, Hanover is an ideal place to start a business. The Canadian Pacific Railway operates between the RM of Hanover and the RM of Ritchot, connecting Winnipeg to the United States of America. Harv’s Air provides light commuter aircraft traffic and flight training. Three hospitals in the region provide ambulance services and many other essential amenities.

Deputy Reeve of the RM of Hanover, Bernie Stahn shares, “On the economic sustainability side, I look back to the 1990s and 2000s and the hog industry expansion; how that provided growth and stability to the RM of Hanover, while other RMs were struggling with no growth or weren’t sure what direction they were taking. We also have strong dairy and poultry industries in our area, but we’re looking to diversify into manufacturing, construction, service, and retail, which is something we never really promoted before.” 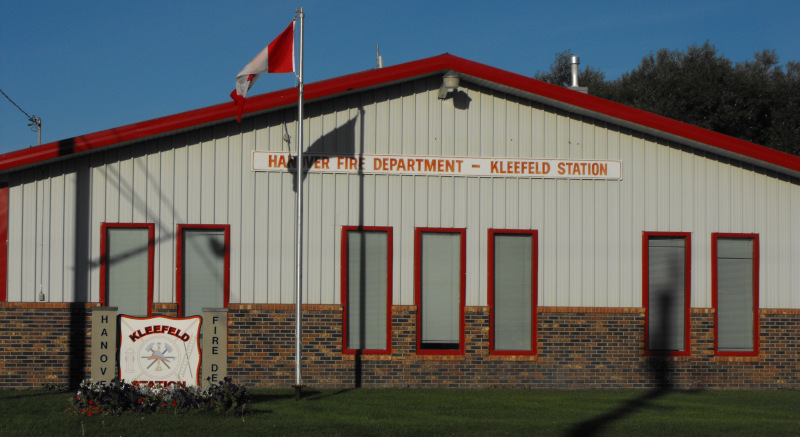 Every two years, Hanover does a new strategic plan that sets out goals for the following two years. Economic development is always a high priority on that plan. CAO, Luc Lahaie, notes, “The RM of Hanover has a Community Development Corporation (CDC) that we use as our investment arm of the municipality. Seven years ago we constructed six highway commercial lots in our community of Mitchell. All six are sold and we’re going to Phase Two. In 2019 and 2020, we’ll be constructing 12 more lots to relocate some rural residential home businesses that have outgrown their location in the country, moving them into a light manufacturing zone conducive to cabinet making, window making, auto body shops, etc., in a more urban area.”

John Giesbrecht is a new councillor, elected last October. As a realtor, he has the pulse of what goes on in the business world, and he’s been a main driver on council for economic development. He explains, “One of the biggest challenges in economic sustainability involves finding jobs for the very large youth population we have coming up. The increase in immigration we’re experiencing, here, tends to bring in large families. So we have a tremendous amount of young people who will be looking for jobs, and as a result, we need to bring in some sort of economic driver that will keep these people in the community. Or they will find jobs elsewhere in general labor – construction, manufacturing, agriculture.”

The population in the RM is growing, and housing is constantly expanding and selling; for every new house filling up, there’s an older house being filled by a first-time buyer. Several residential subdivisions have just been approved. According to Giesbrecht, “They are the type that appeal to the culture of the people who have immigrated here; small two-acre lots. We are working on one area in the town of Grunthal in the south end of our municipality that will be mid-density. The vibe here is not for high-density development. We have that country flavor with the city, literally, next door. Since we surround the City of Steinbach on three sides, we can leverage off them, substantially, when it comes to amenities.”

Connectivity is being addressed in the RM; currently, they have some broadband and fiber is coming in. Council members praise local company – Swift High Speed Internet – for doing a phenomenal job bringing in internet service. The RM is doing everything possible to facilitate them bringing in fiber to as much of the region as possible, starting with the communities first and working out from there.

While tourism isn’t prevalent in the RM, the Mennonite Heritage Village Museum is popular with visitors, and the Hanover area has taken center stage in a number of movie shoots in the last few years, including a recent Hallmark Christmas movie filmed at the Rustic Wedding Barn. And there is no shortage of recreational activities. “We have a lot of good recreation facilities throughout our five communities,” says Stahn. “Arenas, baseball complexes, soccer pitches, a splash park, a pool. Within a half-hour drive, there are eight or ten golf courses, places to hunt, biking, and walking trails. The RM has a lot to offer and that’s a drawing card for people looking at moving to the area.”

Over time, Hanover has invested a substantial amount of money in infrastructure upgrades. Every year, they are rebuilding a couple roads (doing the worst ones first). Because of the growing population, and the thriving poultry and hog industry in the area, the roads have to be in good shape to handle car and truck traffic. The major roads coming into the area maintain the heaviest weight ratings available in Canada.

“We’ve used the federal gas tax funds to improve our roads and wastewater facilities in the last ten years,” says Lahaie. “We are thankful that the Federation of Canadian Municipalities lobbied the federal government to have the gas tax flow to municipalities to improve our infrastructure. And the province of Manitoba had the Municipal Road Improvement Fund, where we received $400,000 per year and we would match that. Added to the gas tax, we reconstructed almost a million dollars of roads for five straight years. We saw a great benefit from those two funds, and we hope they continue in the future. In 2019, we’re receiving $800,000 from the gas tax fund. We have five wastewater lagoons and the funding helps offset the debt on that infrastructure, so the taxation burden is lessened for our ratepayers.” 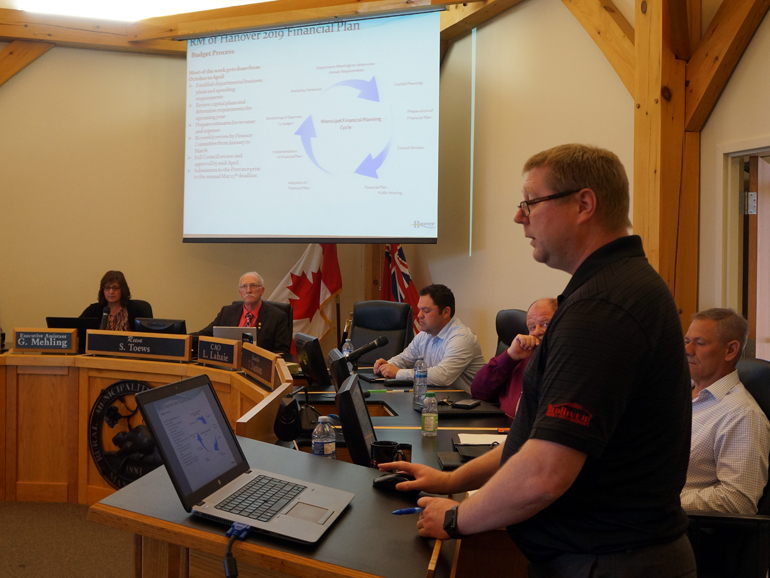 Waste collection in rural Manitoba is not as advanced as in the cities, but about four years ago, Hanover invested in automated garbage containers. Two years later, they brought in automated recycling bins to be picked up by truck, and they also have composting depots during the summer for yard waste from all five communities. Less going into the landfill means less money the municipality has to pay the city of Steinbach that owns the landfill. The initiative has been a big environmental success story for the RM over the last five years.

Looking to the future, Council has created an ad hoc economic development committee, including a businessperson from each of the five communities who will develop a game plan for economic development going forward. As Giesbrecht describes it, “We have a wealth of knowledge and resources, but we need somebody to put it together and package it and sell it. I believe that hiring a good EDO (Economic Development Officer) would be well worth the investment we’d be making. I feel like we’re sitting on a volcano of assets and information, but we can’t seem to light that volcano up. I can see it happening in the next while, and that would be a real catalyst to getting things going here. As a municipality, we also need to get on the radar of businesses and corporations outside the area, and go after the site selectors and people who are looking for places they can refer businesses to locate to.”

The Rural Municipality of Hanover boasts the lowest land costs for commercial property anywhere that’s a viable place for setting up a business – about $20,000 per acre; that same land in Winnipeg would sell for $800,000 per acre. “Plus, the bureaucratic tape in the capital city would be a mountain compared to an anthill in the RM,” says Giesbrecht. “Even in Steinbach, commercial land is selling for $500,000 and up. Access here is way easier, and we have relatively reasonable energy costs, as well. Everything a business needs; we just need the businesses now.”

Stahn chimes in with his own reflections, “We have clean water, clean air, good housing, good schools, good recreation – those are all critical for young families looking for a quality place to live. The RM planning department also works with developers, guiding and assisting them to make their projects come to fruition, rather than setting up roadblocks.”

Commenting on the positive outlook ahead, Lahaie adds, “Hanover is ready to welcome value-added processing facilities to our raw agriculture production industry, just like we did for HyLife, a major player in the hog industry that was constructing a large feed mill here. We bent over backwards to assist them, including helping build a road. HyLife is a great asset to the RM and an excellent model to follow. For other companies looking to settle here, we would surely be open to helping them out.”

WHO: The Rural Municipality of Hanover