Petawawa is a town of 17,200, located in the eastern portion of southern Ontario, in the Ottawa Valley. It is the largest community between Ottawa and NorthBay.  The earliest settlers in the Petawawa area were the Algonquin First Nation, and the name, Petawawa, originates from a local Algonquin language word, “biidaawewe,” meaning “where one hears a noise like this,” referring to the sound of the nearby river rapids. During those early times, the location was ideal for access throughout the region on the Ottawa and Petawawa Rivers for both the gathering of social assemblies and for the transportation of trade goods. 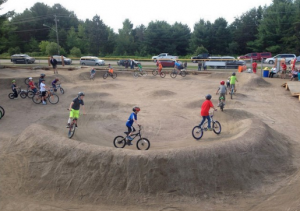 Early European visitors included Samuel de Champlain, who visited in 1613, seeking a shorter trade route to China. Later, French fur traders used the trails along the Petawawa River as part of their trade route. The Hudson Bay Company designated the area as a “strategic location” and established Fort William in 1823 on the Quebec side of the Ottawa River. In the late 19th century, the area was surveyed and settled by émigrés from Scotland, Ireland, and later, Germany. Petawawa was incorporated as a township in 1865 and although its settlers found the land to be uncooperative for farming the timber was valuable and lumbering created jobs and economic opportunities.

The Ottawa River was the early transportation system and means to get the valuable timber of the area to market. With modernization and technological advances came the construction of road systems.  This included the two lane Trans-Canada Highway which runs from Ottawa through the Town along the original fur-trading route.  While the road system is sufficient, based on an economic growth model, it requires significant investment and possible expansion.  “Petawawa advocates and will continue to campaign for a four-lane transportation system. It’s imperative that this happens.  So, we’ll continue to lobby and work with our federal and provincial associates to find the funding to make this vision a reality,” notes Mayor Bob Sweet who has held office for Petawawa since 2000.

Realizing the potential of the area, the Canadian military, in 1905, acquired 22,430 acres of land from local settlers and established the Petawawa Military Camp, which over time, became CFB Petawawa, then Garrison Petawawa, now home to the 4th Canadian Division Support Group and 2nd Canadian Mechanized Brigade Group, making it one of the largest military bases in Canada.

Today, Garrison Petawawa is the main economic driver of the region. “It’s a $400 million payroll that is injected into the local economy on an annual basis, plus about $100 million in goods and services that flow to the Garrison,” reports Sweet “There are approximately 6,000 soldiers on the base and another 900 civilian employees, which makes it one of the largest employers in Renfrew County. “

The importance of Garrison Petawawa to the town cannot be overstated. Housing stock has increased 12 percent year over year in the past decade thanks to extended service intervals and a desire by the military families to purchase a home within the community. This housing boom is further fueled by neighbouring Canadian Nuclear Laboratories which is undergoing an expansion and redevelopment of its service model within the Canadian nuclear industry.  To meet housing demand, new subdivisions representing roughly 700 more homes within the Petawawa community are planned, and additional lands have been identified as designated growth areas. “Petawawa residents also enjoy the lowest tax rate of any urban community in Renfrew County,” Sweet remarks, and the Town Council has worked diligently to preserve and increase core assets without burdening the residential tax base.

This residential growth underscores some commercial and retail service gaps within the community. An Economic Action Strategy recently completed for the Town will help shape priorities and focus on business retention and expansion opportunities. The recent addition of a Starbucks and the current construction of an 80-unit Marriott Hotel and Suites within the downtown corridor are promising developments which Sweet anticipates will induce further economic growth. “Petawawa has prime commercial and industrial land available for development, as well as a fully equipped, recreational and commercial airport with a 5,000 foot runway,” he adds.

Tourism is another pillar of the Petawawa economy. The Ottawa River, a class II, III, and IV level rapids system is one of the largest whitewater environments in Ontario. Not to be overlooked, the 187 km, free flowing Petawawa River travels from Algonquin Provincial Park and merges with the Ottawa River in the Town of Petawawa. Festivals and programming to encourage safe water sports and adventure have been embraced by the community and visitors alike.

An exciting tourism prospect for Petawawa is the recent acquisition of the 296 km., abandoned Canadian Pacific rail line by the County of Renfrew. “This infrastructure will be a tourism and economic development tool,” Sweet states. “It’s going to be the spine of a four-season, multi-purpose trail system that will join numerous trail infrastructures throughout eastern Ontario.”  One tourism product enhanced by this development will be the Round Algonquin Park (RAP) tour, one of the busiest snowmobile routes in the province, combining snowmobile trails throughout Districts 6, 7, and 11.  “Supporting this type of recreational activity will help our economy and support the area accommodation and tourism operators. Other trail developments are currently being explored and a realistic implementation plan is being compiled into an Active Transportation Plan for the Town.”

A trail system of this caliber will include cycling and walking networks, not only for recreational pursuits but to support greener transportation initiatives.  Preserving its natural amenities is part of Petawawa’s DNA. Twenty years ago, the Town, in partnership with neighboring communities, was an early adopter of a four-stream garbage pickup scheme when its landfill was facing closure. “We put in place a four-stream garbage pickup, which includes a green box for organics, a yellow box for recyclables, a blue box for fiber, and then, of course, the garbage,” Sweet recounts. “The program has been very successful.  Organics collected through the recycling stream are turned into compost which goes back into the community in gardens and flower beds. We feel fortunate that we’ve reduced the amount of refuse that goes into the ground. As a result of excellent management, the waste management site is poised to service the partnership communities for the next 50 years.” 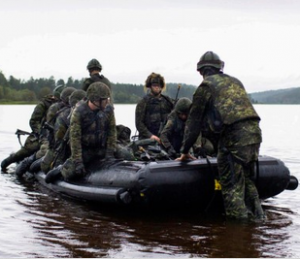 Another sound green initiative by the community was the conversion of street lighting to an LED system.  Taking advantage of an LAS/Real term Energy program, the Town was able to complete the project in three months and realize a return on investment, based on incentives and reduction in hydro consumption, within the first three years of conclusion.  Yearly hydro savings continue to be in the neighbourhood of $100,000. Other green initiative funding applications, currently pending, include new blower systems that can vent to the sewage treatment plant and allow methane gas to heat the complex.

“So, we’ve got a bit of a green thumb,” says Sweet. “We’ve claimed the slogan of ‘walking lightly on the environment,’ and we take it seriously. Each new subdivision agreement requires developers to re-plant trees to replace those harvested as part of the development. Council has been very proactive at balancing the growth of community but not at the cost of development, working in collaboration with the developers to sustain our natural environment. We are making progress but there is much more that can be done; we can all find ways and means to ‘leave the campsite a little bit better than you found it.’”

With a few challenges and a wealth of opportunities, Petawawa boasts a quality of life that many believe is second to none. The town boasts state-of-the-art recreational opportunities, modern infrastructure, and growing commercial and industrial sectors. It is rich in culture and heritage, steeped with a deep sense of community pride and, with its abundance of natural amenities, Petawawa, Ontario is truly “dynamic by nature.”

WHERE: Renfrew County, in the Ottawa Valley 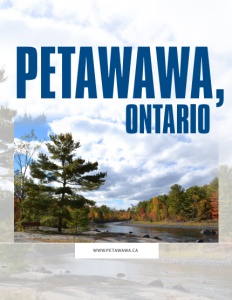