Atlanta’s Office of Sustainability – The Power to Change

Atlanta’s Office of Sustainability is an internally funded strategy organization focused on instituting sustainability best practices into city government and the community so that every environmental activity, program and policy is screened and evaluated according to economic and social impact.

The city was compared with others in best practices research for sustainability, and the research indicated that Atlanta is already implementing more than a third of what needs to be done. The office is working with departments across city government to improve current programs and policies and implement new ones. 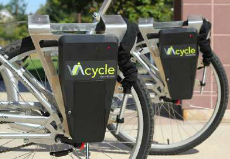 Atlanta passed an ordinance requiring all new construction and major renovations to be Silver-LEED (Leadership in Energy and Environmental Design) certified. Two examples under design and construction are the new public safety headquarters and the international terminal at Hartsfield-Jackson Atlanta International Airport. Additionally, the city reuses and rehabilitates existing buildings to support neighborhood revitalization. The Atlanta Development Authority and BeltLine offices by Underground Atlanta are located in what was once the Block Candy Factory.

Atlanta’s water/sewer infrastructure improvement program mandated by the federal consent decree is on time and on budget, and has already improved operational performance, including reducing the number of spills by two-thirds; tripling the number of asphalt repairs; doubling the number of catch basins cleaned; and increasing the number of leak repairs from 750 per year to 800 per month.
A recycling program is in place for all single-family homes and major city buildings and mandates recycling for all large events in city parks. The city also has a hazardous materials collection program in which e-waste and fluorescent light tubes are recycled. As a part of the demolition waste recycling program, Hartsfield-Jackson Atlanta International Airport recycles everything on demolition and new construction sites. The Department of Planning and Community Development has an automated electronic plan review process eliminating paper and storage and reducing necessary travel.

City Hall is undergoing an effort to decrease the amount of junk mail by cancelling subscriptions and reduce the amount of returned mail by purging mailing lists, and more field staff across city departments are using computers rather than paper.

Atlanta is already meeting EPA standards for its use of green products and a new green cleaning policy ordinance, alternative materials are being considered for all new procurement. City Hall’s cafeteria is working towards replacing all its Styrofoam cups and containers with alternative materials. The city is also reducing the size of its fleet, revoking take-home policies, launching a shared car program and seeking more fuel-efficient cars and applying for a grant to buy alternative fuels for its diesel fleet.

The Clean Air Campaign and the 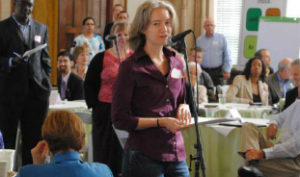 downtown TMA are partners to promote programs such as commuter rewards, RideSmart and teleworking. The city also subsidizes MARTA fares for its employees and conducts various outreach events such as “Walk Day” and “Give Your Car the Day Off.”

The city built the first municipal green roof in the Southeast in 2003 as part of a pilot program intended to raise awareness of green roofs and demonstrate the possibilities of incorporating them into Atlanta’s urban landscape. Most major city parks have an onsite compost facility for used yard waste, and various locations collect Christmas trees for chipping as mulch. All new city landscaping incorporates native and drought-tolerate plants.

Eleven new playgrounds were installed in 2007 by a certified environmentally-responsible company that uses at least 80 percent recycled, recyclable and biodegradable materials. The city’s Watershed Department is planning to harvest rainwater for the grounds of all of the city’s recreation centers and maintenance facilities.

The 2006 BeltLine project will be realized in a 22-mile loop of parks, green space, trails and transit around the city and ultimately serve as a bundle of solutions to the very challenges that threaten to limit Atlanta’s health and prosperity – traffic, deficient green space and recreation and inequitable economic development. Transportation planners are developing the city’s first comprehensive transportation plan which incorporates expanded MARTA, light rail, BRT and expanded HOV and express bus systems.

To measure its success, the Office of Sustainability will track its initiatives on two levels. First, the city asked Georgia Tech to establish a baseline for carbon dioxide emission for city government. Programs and policies will be measured against the baseline to evaluate progress towards reducing Atlanta city government’s carbon footprint. The city is also developing a sustainability scorecard to track the progress of all projects across the various government departments.

AT A GLANCE
WHO: City of Atlanta’s Office of Sustainability
WHAT: Internally funded strategy organization focused on instituting sustainability best practices into city government and the community
WHERE: Atlanta, Ga.
WEBSITE: www.AtlantaGa.gov 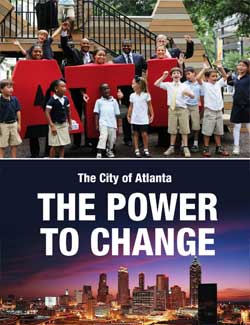