Bristol, Virginia – on the border of Virginia and Tennessee

A twin city with promise and permanence

A Southern-friendly city straddling the Virginia/Tennessee boundary, Bristol is a quirky place blessed with interesting history influenced by both sides of its State Street borderline. Established in 1852 as a hustling trading town and railroad junction on the Tennessee side, Bristol soon acquired a neighbor in Goodsonville, the settlement on the other side of the border. The outer edges of their lands helped form the city boundaries but the distinctions quickly became blurred.

In 1890, Goodsonville officially renamed itself Bristol, and the twin towns continued to grow their respective downtowns along that same, central thoroughfare. A regionally famous marker located between the roadway’s 400 and 800 blocks has billed Bristol “A Good Place to Live” since 1921. It’s a stately distinction that fosters a sense of pride of place in the local community and distills the Bristolian experience in a warm welcome to those just passing through.

“We’re definitely a unique city,” attests Mayor Anthony Farnum. “For folks like myself who live here and who’ve grown up here, the fact that we’re on both sides of the state line is just kind of normal. But whether you live on the Virginia side of the Tennessee side, we’re one community. What’s funny is that a lot of times, you go back and forth and you don’t even realize it. We even have some laws that apply on one side of State Street that don’t apply on the other.”

Many think of Nashville as the home of American country music, but the designation actually belongs to Bristol—the true birthplace of the country. It earned this title thanks to the region’s southern Appalachian settlers, who brought with them old-world ballads and songs that evolved rapidly in the Civil War era with the expansion of the railroads. Following Edison’s invention of the phonograph, Bristol became somewhat of a hub of operations for a new recording industry that tapped into rural mountain music. Ralph Peer, who was a prominent businessman working in this genre of music publishing at the time, scouted local musicians from Tennessee and the surrounding southern states. Their early recording sessions, called the “Bristol Sessions,” would unofficially mark the birth of country music.

“We have the Birthplace of Country Music Museum downtown that’s affiliated with the Smithsonian Institute,” shares Farnum. “They do great work there and it brings a lot of visitors into our downtown area.”

The museum shares the story of those legendary Bristol Sessions—a historic event considered by some as the “Big Bang” of modern country music. That heritage is further commemorated in a bronze statue display titled “Take the Stage” by artist Val Lyle, installed in 2014 in a park across from the museum.

The Bristol Motor Speedway is another great option for a one-of-a-kind introduction to the city’s historic and cultural character. Nicknamed the “World’s Fastest Half-Mile”, it’s been among the most popular NASCAR tracks since its inception in 1961 due to its extra-steep banking, all-concrete surface, two pit roads, and stadium-like seating. The circuit was innovated by Carl Moore, who was inspired to bring stock car racing to northeast Tennessee after visiting the then-newly constructed Charlotte Motor Speedway in North Carolina. 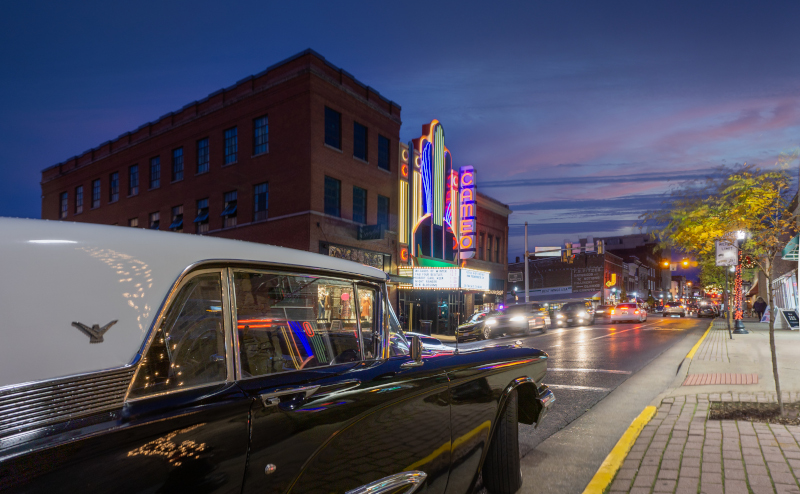 “We have a lot of things that go hand in hand with both the country music and NASCAR track,” Farnum says. “There’s a NASCAR driver who is a two-time Daytona 500 winner—he’s now retired from racing but still provides commentary on Fox Sports. He’s opened up a brewery and restaurant in downtown Bristol called Michael Waltrip Brewing. It’s great to kind of bring in the NASCAR theme. And you can’t really go anywhere in downtown Bristol without running into live music.”

As a Certified Main Street Community, the historic and vibrant downtown has more and more to offer every day, largely due to the ongoing efforts of dedicated citizens, business owners, and other friends of Bristol collaborating under the banner of Believe in Bristol, a non-profit business development agency.

“Our downtown has grown a ton even just in the past year, with Believe in Bristol hosting its 7th Annual Entrepreneur Grants Program,” reports Economic Development Specialist, Mark Chapman. “They take competitive applications and these businesses end up filling most of the vacant spots we have downtown. We’ve got entertainment going on, new restaurants, new bakeries. And with the new festivals coming into town, people are starting to feel like they’re part of this grand narrative of progress.”

With the proposed Amtrak service to Bristol, the city could see even more action coming in through its beautifully restored train depot, built in 1902 on the Virginia side of State Street.

“We want Amtrak here, but there’s a capacity issue in Northern Virginia with one of the bridges,” Chapman addresses. “That has to be taken care of before they can look at bringing service to Bristol.”

According to Chapman, the city is also currently being considered for an inland port. If the plan comes to fruition, this would make it one of only two rail-served port facilities in the State of Virginia, the original being in Front Royal.

“There are studies being conducted right now on both fronts,” he says. “But Amtrak is one of those services we’d definitely love to have. I think it would drive business downtown like crazy.”

Big businesses like Hard Rock and Amazon are already headed in that direction. The Bristol Casino-Future Home of Hard Rock opened its doors as a temporary casino space on July 8th, 2022, while the ribbon cutting on the new Amazon distribution facility on Thomas Road near Interstate 81 Exit 7, took place in September 2021.

“The fact that we’re a small town but growing, and are attracting major companies like Hard Rock for our casino and the Amazon fulfillment center, is really great,” mentions Farnum. “We really like to brag about that.”

Hard Rock actually made history by opening as the state’s first full-service casino; the Bristol location took in more than $37.5M in wagers in its first week alone, and generated over $673,000 in taxes for the state, according to the Virginia Lottery Board.

“The legislation was passed in the Spring of 2020 to allow casino gaming in certain localities that fit the criteria,” Farnum explains. “There could be four, potentially five casinos in Virginia, but Bristol was ready to go with our partners, with Hard Rock and our local developers, to have that idea from the very beginning, and we were able to open up the doors first.” 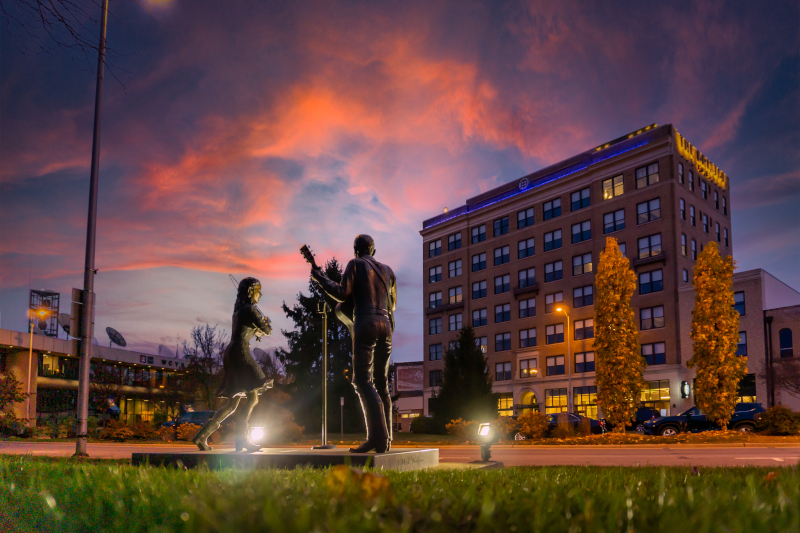 Located at 500 Gate City Highway, the former site of the Bristol Mall, the 30,000-square-foot casino houses 870 slot machines, 21 table games, and a Hard Rock Sportsbook offering wagering on all major sports. “The casino will be opening up in different phases over the next couple of years,” Farnum says. “So what we’re calling ‘the casino’ is really just a temporary aspect. It’s open 24/7, with a few different food options inside, but in two years—Summer of ’24—the permanent casino will open in a different space in the mall, including the hotel tower and more food and shopping venues.”

Following that final development phase, 2,000 jobs could potentially be connected to the Hard Rock project. The casino’s location, off Exit 1 on Interstate 81, also makes it perfectly positioned to welcome new and returning visitors from all over the country.

“If you go down to the casino parking lot on a busy night, you’ll see license plates from all over: North Carolina, Georgia, Kentucky, West Virginia,” says Farnum. “It’s already become that tourist destination that we were expecting.”

With the growing wave of tourist dollars washing up on Bristol’s shores, a lot of interest has been generated around the city’s retail development, The Falls. Originally designed to attract a Cabela’s sporting goods store, Sheetz convenience, and various restaurants, the numerous proposals received to breathe life into the one-million-square-foot mixed-use retail complex never really got off the drawing board. Those challenges, however, are becoming fewer and farther between.

“When Bass Pro acquired Cabela’s, we lost our anchor store, so that kind of hurt,” Farnum explains. “We’re still continuing to market that, but it’s been a little slower since Covid-19 happened. Retail is really changing, with the growth of Amazon and online shopping. So it’s a little tougher to bring in a big-box retail store than it was 10 or 20 years ago.”

He confesses that the “phone’s been busier” since the casino opened, and the city is “actively recruiting” and trying to fill up those vacant spots to the best use that can be made.

“There’s a lot of potential still to turn that into what I like to call a Lifestyle Center, where you can walk outside your front door to the grocery store, bank, hair salon, or restaurant,” Farnum insists.

“The casino is going to be the driving force behind a lot of that development,” Chapman chimes in. “I’m excited for the growth that we’re seeing. We’ve got a lot of traction—stuff that hasn’t been announced. But I can tell you that Bristol, Virginia is going to look really good in the next five years.”

What: A growing town with musical roots

Where: Located on the border of Virginia and Tennessee

Straddling the Tennessee and Virginia border, Bristol is a city full of dualities. Rhythm and racecars; quiet shores paired with popping stores; traditional craft brews next to innovative, fresh eats—you better believe Bristol has it all.

We’re the Birthplace of Country Music, home to the iconic Bristol Motor Speedway and the site of the Bristol Casino, the first in Virginia.

Walking down State Street, it’s easy to see why we’re known for our historic and beautiful downtown marked by local businesses and smiling faces greeting you around every corner. Just minutes from town, soak up the foothills of the majestic Appalachian Mountains, gorgeous lakes, and calm rivers. Who could resist such a tempting mix of experiences?

Whether you’re visiting for a weekend or a week, this close-knit community welcomes you to slow down and revel in some good ole fashion southern hospitality. Break out those old dancing shoes, try a new drink or sample the local flavors—do whatever it is that makes your soul happy.

It’s time to embrace the dualities one city can offer and let the good times flow. Who knows what you’ll discover? After all, it’s Bristol, baby!

Bristol Casino, future home of Hard Rock, opened its doors in July of 2022. Since then, they have paid $7.2 million in gaming taxes to date in Virginia. They have 600 team members and continue to grow. They look forward to opening the Hard Rock Hotel & Casino Bristol in 2024.