Curiouser and Curiouser. That one phrase borrowed from famed writer Lewis Carroll’s Alice In Wonderland succinctly sums up the driving force behind the city of Peachtree Corners in Gwinnett County, Georgia. Through curiosity comes the need to fine-tune, enhance, advance, and better our world for both present and future generations.

That was the dream of Georgia-Tech graduate and developer Paul Duke in the late 1960s. He envisioned a planned community in which area graduating students would make their homes, work, and raise their families. His vision included the 500-acre Technology Park Atlanta – a campus of low-rise buildings that attracts high-tech and Fortune 500 industries. Since the City’s founding in July 2012, Peachtree Corners has paid homage to Duke’s dream. Technology Park continues to attract top-tiered engineering talent from across the country, while also serving as headquarters for many regional, national and international corporations that thrive in the pro-business environment, which offers a zero millage rate. 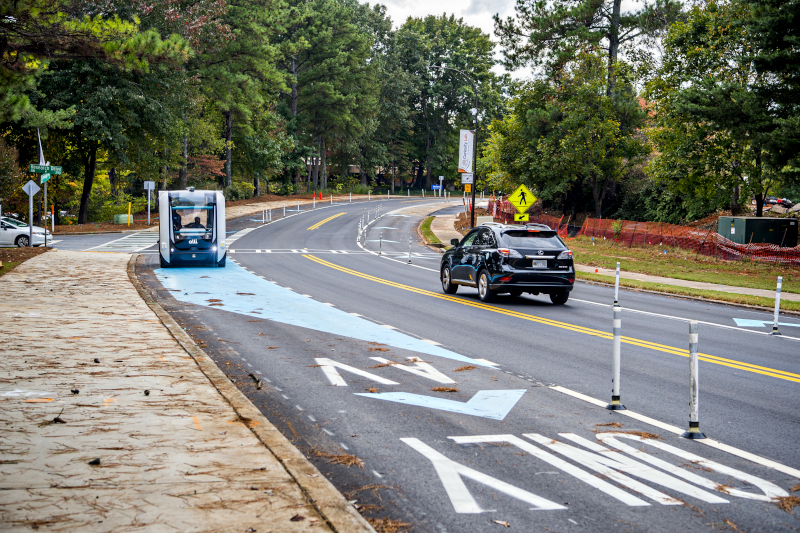 Today, Peachtree Corners is a bustling city of 45,000 residents and 45,000 jobs. And Technology Park served as a harbinger for the creation of the city’s newest economic development park, Curiosity Lab, which opened on Sept. 11, 2019, and now plays a large part in bringing technological advancements from around the globe to life in a real-world test environment that offers a 3-mile 5G-enabled autonomous vehicle test track and smart city laboratory.

Reflecting on Curiosity Lab, Peachtree Corners City Manager, Brian Johnson, notes, “Shortly after our grand opening in 2019, we had the first deployment of a driverless shuttle on a public street, the same street where human-operated automobiles were being driven as well. So we had a driverless shuttle interacting with driven vehicles and that shuttle was here for about five months.” For residents of Peachtree Corners, witnessing such activity while going about their daily business isn’t unusual. In fact, it’s a large part of what makes Peachtree Corners home. “The shuttle is a great example of how curiosity lab, as a living laboratory, is a location for technology to go and get tested and enhanced when it has graduated from a closed laboratory environment in which it was initially approved,” adds Johnson.

Putting the driverless shuttle through real-life situations enabled developers to identify areas requiring improvement or enhancement. The test course at Curiosity Lab has sweeping curves, a mature tree canopy, multi-story office buildings, and elevation changes – one section has a 13 percent grade. “The shuttle got a chance to interact not only with human-driven automobiles, but on sweeping curves, having to read lines in the pavement that were covered with leaves,” reports Johnson. “When the shuttle hit the hill that has a steep grade, its initial vehicle radar thought that something was in front of the vehicle. They had to tweak and adjust settings for this real-world situation and as a result of their work here they ended up taking their lessons learned to help create a 2.0 version of their vehicle. This is a good example of having a piece of technology use our living laboratory to get adjusted and refined in order to make it even closer to being available to the general public.” 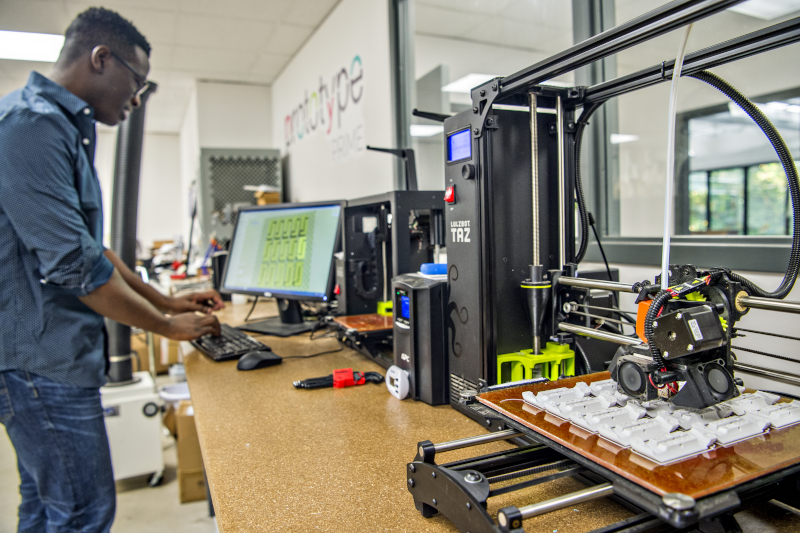 If the driverless shuttle wasn’t enough to turn heads, having 100 tele-operated e-scooters traveling around the area without human drivers certainly was. As Johnson explains, “Go X and Tortoise partnered to create tele-operated scooters that can be remotely driven by humans. The way this works is that when someone is not on the e-scooters, two training wheels come down on the side to give it stability. And then from a remote location, in this case Mexico City, the company has a human dial into that particular e-scooter and take over driving it by looking through a camera mounted on the scooter. They are testing two things: one is the ability to take e-scooters and redeploy them or remove them from settings that were creating sidewalk congestion problems in big cities. The other is the repositioning of them, which is a costly endeavour every night.”

Rather than have trucks pick up the e-scooters and bring them back to charging stations, the e-scooters are remotely driven to areas where they can be charged or rented by another individual. They are also testing the use of an app that people can use to summon an e-scooter like they do an Uber or a Lyft. When the e-scooter arrives, the person jumps on it and takes over control. Once the operator has reached their destination, the e-scooter can be summoned by another driver. With the onset of COVID-19, measures have been put in place to have each e-scooter return to a docking station where it is disinfected before being redeployed.

While not as visible as autonomous vehicle testing, additional innovations but are of equal importance in the evolution of technology include cybersecurity and vehicle-to-everything (V2X) testing within Curiosity Lab’s “city street of the future”. Johnson elaborates, “A V2X environment is one where connected vehicles can communicate with everything. It’s where vehicles can talk to each other and share data such as speed, size, and direction of travel. It’s where vehicles can talk to the surrounding utility infrastructure such as video cameras mounted on light poles and to traffic signals that will tell a driver when the light will be turning red or green. It’s where vehicles can also talk to the phones of people who are walking along the street, informing a driver of things such as if a person is crossing the street up ahead. The video cameras being tested in this V2X environment also include innovative capabilities such as object detection and edge computing that allow for cameras to notify approaching vehicles of obstructions in the roadway.”

Curiosity Lab also has a vehicle available for use as a mobility test platform for companies wanting to test mobility devices.

With COVID-19 forcing people to be more imaginative and innovative in the way they conduct business, and working remotely being at an all time high, technology is advancing at a faster rate than ever before. “Some interesting stuff has come of this,” says Johnson. “We currently have a company that is testing virtual reality entertainment technology for use in the back seat of vehicles.” Companies have begun looking at enhancing the entertainment options for backseat and front passenger seat environments as more people are traveling in their vehicles and less so in airplanes due to the pandemic. “Necessity is the mother of all invention,” notes Johnson. “That’s the case here in Peachtree Corners and we see it in everything that is being tested at Curiosity Lab. I read an article recently that the rapid increase in the use of technology during the pandemic for things like retail and medical and other types of purchases and interactions has advanced more in the last three to four months than what would have normally taken 10 years. I think it’s fair to say we are all scrambling to keep up with the rate in which change is being accelerated but I am proud of the living laboratory role that Curiosity Lab is playing during this rapid evolution of technology.”

It is comforting to know that in Peachtree Corners, a 17-sq. mile city where the future is now, the curious and the innovators live and work side by side – bringing to life what started out as a dream and showing the world that what can be envisioned, can be done.

Are you ready to unlock the potential in your IT? VC3 makes IT management easy for Georgia cities and towns. Maximize your potential with reliable, secure, and powerful technology solutions.

Town of Wickenburg, Arizona – Maricopa and...