The City of Warman – A Very Vibrant Place to Be

Still, in her estimation, her city of Warman, Saskatchewan is well on its way to establishing an identity that won’t require it to share the covers with its southern neighbor in Saskatoon.

“The city has a history that’s included a good planning mindset, so, when the growth started occurring, we already had good infrastructure in place to accommodate it,” she said. “It’s a beautiful community, close to a large city with all of its amenities, so we’re seeing people come from all over. There are opportunities here and it’s a very vibrant place to be.”

The city’s population stood at 7,084 at the time of the 2011 census, a number that indicated a 48.5-percent jump in population from the previous headcount just five years earlier. Most recent covered health population numbers show a population of 8700. Between 170 and 250 single-family houses have gone up annually for the past three years, and in 2012 alone, permits were granted for 245 single-family housing starts and 100 multi-family units.

It’s become a hotspot for young, affluent families in particular, and boasts an average age of 31 and an average family income of $90,000.

And with those numbers, city leaders say, come opportunities. 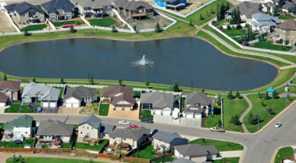 “When the economy began picking up, people started to see the potential here, the appeal of the community,” said Brad Toth, Warman’s manager of planning and development. “It drew people from the city who were looking for a different pace of life.”

To attract the commercial and industrial development to both serve and employ its burgeoning population, the city’s council adopted the Business Tax Incentive Bylaw, a measure which encourages businesses to either locate or expand operations in Warman in exchange for a tax-exempt period of up to five years. The city, incidentally, has one of the lowest business tax rates in Saskatchewan.

Cooperation between the city and developers has helped attract the interest of national and multinational companies, Spence said.

Development of the Legends Plaza, an 11-acre commercial plot in the city’s center, is underway alongside the existing Legends recreation facility on Centennial Boulevard. A $10 million Co-op food store and gas station are set to open soon with more than 100 employees and 25,000 square feet of retail space.

“We want to be a self-sustaining and self-sufficient community,” Toth said. “We want all the things that people want when they live and work someplace – retail shops, recreational facilities, leisure options, etc.”

Toward the recreation and leisure ends, the Legends Centre has been a huge advance.

The facility is open year-round and its 1,100-seat arena comes complete with 12 dressing rooms, separate referee rooms, a four-sided scoreboard and a state-of-the-art sound system.

The building also houses two multi-purpose gymnasiums, space for meetings, conferences, workshops or weddings, a childcare facility for kids aged two months to 12 years, a co-ed Anytime Fitness operation and both a multidisciplinary rehab clinic and sporting goods store. The Warman Community Middle Years School, which opened in 2012, is also attached to the complex.

It hosts myriad events in addition to the requisite hockey tournaments, and the traffic in and out of the place was enough to draw the notice of City Manager Stanley Westby, who’s still fairly new to the area after taking his staff position in December 2013.

“It is a tremendous benefit to our community to have a modern, first-class facility such as this,” he said. “I frequently attend the Legends Centre and have been amazed by the amount and the diversity of activity occurring. Total weekend attendance varies from 1,000 to as much as 3,500.”

Much of Westby’s time from week to

week is devoted to the future, and he said groups of various sizes are tasked with frequent meetings to discuss long-term strategic plans, visions for the city and coordinating with local and regional partners to chart a course.

“To manage all the growth it is necessary to react to everything very quickly,” he said. “Budgets have to be able to anticipate what’s coming, so we’re ready for it.”

Among the noticeable improvements to city services and surroundings have been an 80-acre expansion to Warman’s lagoon sewer system, improvements to Highway 305 and construction of arterial roads to allow for smoother flow and increased traffic.

“The city has had to be creative to achieve some of the extra things like the recreation complex, etc.,” Spence said. “A lot of places get left behind, but when we decided to move forward we looked for partnerships – with developers, with the provincial government, with the school board – that would help us get things done and allow us to share services.”

Spence said there was some reluctance on the part of some long-time Warman residents to buy in to the growth plan, especially since the status quo had been largely unchanged for several generations. Population only numbers in the low hundreds through the 1950s, at which time local affairs were addressed by a rural municipality.

Incorporation as a village came in the early 1960s and a town five years later, before city status was granted by Saskatchewan’s provincial government in 2012.

“There are some who don’t care for it, sure,” she said. “Once you open the door to growth, you can’t shut it. If residents want services and amenities in their community, the way to facilitate that is to embrace the idea of growth and realize the benefits that come with the extra tax dollars and increase in population. Gradually, those same people began to embrace the idea as they began realizing exactly what benefits that Warman was buying into.”

WHO: City of Warman, Saskatchewan
WHAT: Home to 7,084 residents, according to 2011 census – up 48.5 percent from 2006
WHERE: South, central Saskatchewan, 20 kilometers north of Saskatoon
WEBSITE: www.Warman.ca 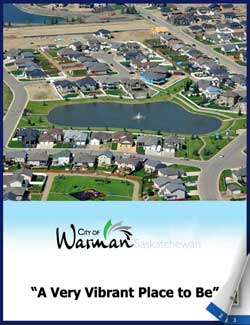