Having a “Pretzel Day” all year long.

The pretzel is a very old and very prized food. Legend has it that pretzels were invented around 610 A.D., by Italian (some say German, some say French) monks, as a reward for children who had learned their prayers. Pretzels originally came to the United States in the late 18th century, brought in by Southern German and Swiss German immigrants, better known as the Pennsylvania Dutch. Today, traditional baking techniques from centuries past are still be practiced by culinary artists devoted to this singular and tasty edible.

One such practitioner is Ben Miller, a third-generation Amish baker, who, along with his wife, Elizabeth, bought a small, soft pretzel business some years ago in South Bend, Indiana. Unfortunately for Ben, but providentially for the business that was later to become Ben’s Soft Pretzels, the recipe for the provender he hoped to sell didn’t come along with the shop. So, the couple went to work, improvising and experimenting until they came up with the recipe that was destined to transform their lives and the pretzel business as a whole.

Enter business partners Scott Jones and Brian Krider, who met Ben one day and, after sampling some of his wares, decided to start a business built around the Miller’s proprietary recipe for soft pretzels. The partners opened their first Ben’s Soft Pretzels store in Elkhart, Indiana in May 2008. Within 18 months, they opened store number two, and six months later, store number three. In March 2013, Jones and Krider sold their first franchise and by 2015, the company had nine corporate stores and over 30 franchise locations in Indiana, Illinois, Michigan, Wisconsin, and Florida.
Recently, Business View Magazine caught up with Jones, Krider, and some of their staff to find out what has transpired in their business over the past year – especially since learning that the company has now grown to 71 units. “The last time we spoke,” Krider begins, “we were working on one of the major developments in our system – our logistics and our distribution. We were in the process of looking to find the right partner in distribution for our products to our franchise base. Originally, we distributed our proprietary ingredients ourself. But as we grew our reach – down to Florida and southern Indiana, several hours away from our location in Elkhart – we wanted to make sure that our efficiencies were on point and we wanted to make sure that we had a partner in place that could handle the inventory levels that we are going to need as we grow. We found that partner – Gordon Food Services. They can handle all the needs and wants of our franchise partners and handle our growth. So, this year, we’re on pace to hit around 25 new openings.”

Krider explains that partnering with a national distribution network will allow Ben’s Soft Pretzels to open up franchises that would not have been easily serviceable from its Elkhart-based location. “We can go to the state of New York and open up a franchise,” he says. “We have the real estate opportunities with our partners at Wal-Mart; we have real estate openings with our partners at Meijer, and all the mall locations. But feeding those folks with the product – we wanted to make sure that our efficiencies and our capabilities were met and that’s why we partnered with Gordon Food Services. It’s a big deal in our business, because we can flip a switch and within several weeks, we can have a distribution network set up to feed those locations with Ben’s Soft Pretzels proprietary ingredients. They have distribution centers throughout the East coast as well as all of Canada. So their model works for us.”

Jillian Koeneman is the company’s Vice President for Marketing. She also reflects on this past year’s achievements: “From a marketing perspective, we’ve grown leaps and bounds,” she declares. “We appeared on Fox and Friends; we appeared on the Today Show. So we’re reaching a large amount of people. We just experienced National Pretzel Day and we reached over 95 million people on that day, alone. We partnered with the Intrepid Fallen Heroes Fund – they provide medical funds and all kinds of support for men and women who came back from the war injured. And on National Pretzel day in April, we raised $30,000 in one day for that organization. And we’ll raise money again for them in October.”

Jones reports that Ben’s is targeting new franchise opportunities in cities such as Cincinnati, Louisville, Milwaukee, and Detroit, and all states east of the Mississippi, as well as Texas and Oklahoma. “We have readily-available real estate and we have the ability to readily distribute to them with this new partnership with Gordon Foods. And that partnership has changed the playing field for us,” he states. “Ben’s Soft Pretzels brand is up and coming. We’ll finish this year somewhere around 85 stores open and ready to go and next year, we’re probably going to break that three-digit number.”
The company is also hoping to increase the number of its multi-unit franchisees, which now account for approximately 70 percent of its franchise partnerships. “That’s our next big push,” Jones says. “To attract folks who are already multi-unit franchisees; that are already in certain markets; that are looking to add additional business units where they don’t have to grow their management team – they just have to add additional front line folks to help build their organization. It helps them utilize a smarter real estate footprint, so that they’re not having to drive or fly hours from their home office; they’re simply going a few miles down the road to the nearest Wal-Mart or Meijer, where they will find a nice little footprint for a high-revenue, high-margin generating unit.”

Ben’s Soft Pretzels also has a dozen corporate-owned stores, with four more opening this year, and Krider believes that running them allows the company’s management to better understand the daily travails of its franchisees. “A franchisee can come to us and we know what they’re going through,” he says. “Our team knows because we’re doing it; we’re living it. When we have a franchisee that comes to us and says, ‘I can’t get my labor down,’ I can sit there and cry with him and I can laugh with him because we pay labor; we know what they’re going through. We want to make sure that we can go to a multi-unit franchisee and say: ‘We have twelve, fifteen, or twenty units that our corporation owns; we know what it is to be a multi-unit, as well. We’re a franchisor but we’re also a franchisee of ourself. We go through it; here’s our model; here’s what we’ve built.’ And they can see that this particular ten or fifteen-pack of stores, works. And that’s something that is important to us – to be in sync with the folks that are doing what they bought into. That’s how it’s going to make our system and our brand, better.”

Bob Thatcher is the company’s new Director of Franchising and Real Estate Development, having come to Ben’s Soft Pretzels with 25 years in the commercial real estate business with a focus on enclosed, regional shopping centers. He’s very bullish on Ben’s expansion into new markets, as well as the company’s willingness to commit capital and talent into an ever-expanding territorial footprint.

“We’ve all grown up visiting regional malls around the country and the reality is that the customer has become very bored with the homogenization of chain retail,” he says. “Every mall is basically the same – same brands, same merchandise, same overall experience. And with the advent of the internet and so many dramatic changes in the retailers, themselves, the focus of the mall industry – owners, managers, and developers – has really been to change the model and enhance it. And Ben’s fits that bill in a remarkable way, with a new, exciting brand and, above all, a fantastic product with highly loyal, even fanatic, customers who drive traffic into those shopping centers, ultimately supporting other retail, as well. Meijer and Wal-Mart recognize that their customers will come to their stores, spend a hundred dollars on general merchandise, frankly, just to also get a Ben’s pretzel to take home or take back to the office. So that is tremendous with respect to being an up-and-coming retail brand and product in the marketplace.”

Another strategic partnership that the company has established this past year has been its membership in the IFA – the International Franchise Association. “That has been a huge help to our business,” says Jones. “The people that we have met at the IFA convention have been absolutely transparent about their businesses and have allowed us to glean crucial information on management and overall franchise strategy that’s important to our franchise partners and the rest of our team. It’s been absolutely fantastic getting all of these resources available through the IFA to help us push our business along. We’ve been very thankful for the partnerships, friendships, and relationships we’ve been able to establish.”

Finally, Krider says that Ben’s also has a new relationship with the South Bend Chocolate Factory, the fastest growing chocolate company in the country. “We’ve been friends with the owner since we started doing pretzels at Notre Dame,” he says. “They have recently become a franchisee in downtown South Bend. We’re also working on a co-branded project in Indianapolis that would be a café that would carry their coffee and beverages and a pretzel bakery, as well. That is scheduled to open in mid-June in a Meijer location.”

All in all, it’s been a busy and productive year at Ben’s Soft Pretzels. We’re looking forward to catching up with the team again, sometime soon. In the meanwhile, as the folks at Ben’s are fond of saying: “Have a pretzel day!”

Check out this handpicked feature on the Platinum Storage Group.

WHAT: Franchiser of soft pretzel outlets

WHERE: : Headquarters in Elkhart, Indiana

RT7 – RT7 is a cloud based software provider in partnership with HP (Hewlett Packard), Tender Retail, Verifone and EMVCo that provides retailers with an all-inclusive POS system encompassing Hardware, Installation, On-Site Service, Software, Program Updates & Integrated EMV Payment Processing. Over 25 years of experience, knowledge, feedback, input, countless hours of actual use, and hundreds of millions of transactions processed in the field has provided the foundation for RT7’s latest product – V2POS – the next generation of the hosted POS System. – www.rt7.net 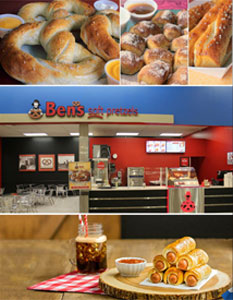