June 2016Past IssuesSupply Chain and Logistics

A quarter-century of progress serving the northeast

Since 1853, trains on the Delaware, Lackawanna and Western Railroad carried passengers and freight between Buffalo, New York, and Hoboken, New Jersey, with spurs to Oswego, Utica, Syracuse, and the anthracite coal fields of Pennsylvania. David Monte Verde grew up in Dansville, New York, a small town in the Genesee Valley, on the Lackawanna mainline. He says that, as a young boy, he became attached to the railroad that ran through his hometown in the western part of the state. “I had an uncle who worked for the railroad and my father had a taxi and limousine service that serviced the passenger trains,” he remembers. “It became my favorite railroad.” Little did that young boy know that, a few decades later, he would actually be running the very railroad he so adored.

While the Lackawanna had been a profitable railroad for many years, by the middle of the last century, it was in decline. Loss of passenger traffic, the waning of Pennsylvania’s coal industry, and several natural disasters which destroyed tracks and materiel, severely cut into the railroad’s revenue leading to a 1960 merger with its rival Erie RR, and then inclusion in Conrail in 1976. In the mid-1980’s Conrail, which was also facing economic hardships, began selling off its low density lines and equipment.

In 1985, Monte Verde and his business partners Mike Thomas, John Herbrand, and Chuck Riedmiller formed the Genesee Valley Transportation Company, Inc. (GVT), to purchase some of Conrail’s castoffs. “This group of friends got together and we formed a company and bought our first locomotive from Conrail,” Monte Verde says. “We leased it out to the Rochester & Southern Railroad; then we bought some more locomotives and we were buying and selling boxcars, coaches, and cabooses. At one point, we had four locomotives all out on lease.”

“In 1989, an opportunity came along, and we moved on from dealing in trains to running a railroad,” Monte Verde continues. “There was a little three mile railroad that Conrail was the designated operator for on part of the old Delaware, Lackawanna mainline into Buffalo, and they had stopped service on it. So, we put a proposal in to operate that.” At the time, the line was owned by Erie County which ultimately decided to grant the lease to the Group’s new subsidiary, the Depew, Lancaster & Western Railroad. “We brought one of our locomotives over there, but there were very few carloads available to us,” he says. “ConAgra had a flour mill on the waterfront that was being switched by Conrail and they wanted some service. We won that contract and we got into that business. And it grew from there.”

The next year, Genesee Valley Transportation Company bought the Lowville & Beaver River Railroad (L&BR) in New York’s Adirondack Mountains region. In 1991, it expanded again when it acquired another 124 miles of former Conrail trackage. “Sixty percent of the revenues on that railroad were consumed by New York state property taxes,” Monte Verde explains. “It didn’t allow anything for labor, maintenance, and upkeep and it was a big losing issue for them. So we purchased what became the Mohawk, Adirondack & Northern running out of Utica and up in the Adirondacks.” The MA&N operates in the foothills of the Adirondack Mountains with terminals in Utica, Carthage, and Lowville, New York, where it connects with the L&BR.

In 1993, Genesee Valley Transportation Company was presented with its first opportunity to operate outside New York State when the company was the successful bidder to run the Lackawanna County Rail Authority’s rail lines in the industrial areas of Lackawanna and Monroe counties near Scranton, Pennsylvania. GVT’s Delaware-Lackawanna Railroad (DL) began serving this region in August of 1993, and now operates over 100 miles of trackage north and east from the Scranton terminal, into the Pocono Mountains and on into the Delaware Water Gap. Finally, it 1996, Genesee Valley Transportation Company incorporated the Falls Road Railroad (FRR) to acquire more Conrail track and now operates a forty-five mile rail line from Lockport to Brockport, New York. GVT’s Class 1 interchange partners are CSX Transportation (MA&N, FRR, and DL&W), Norfolk Southern (DL and DL&W) and Canadian Pacific (DL).

Today, GVT has grown from its original three miles of track to four rail lines with 318 miles of track, 32 locomotives, 8 terminals, and 68 employees. The company hauls about 14,000 carloads of freight a year for more than 75 clients throughout New York and Pennsylvania. The system handles a large variety of commodities including grain, forest products, paper, plastic, clay, steel, petroleum and fuel products, chemicals, coal ash, olive oils, fertilizer, finished products, and more.

According to Monte Verde, some of Genesee Valley Transportation Company’s biggest customers include: “a Cargill flour mill in Mt. Pocono, Pennsylvania – we do about 4,000 cars of wheat there; we have an ethanol plant in Medina, New York, called Western New York Energy – we bring corn into there for processing. We have a lumber treatment plant in the Poconos – we bring southern yellow pine and they pressure treat it and ship it out by truck to all of the ‘big box stores.’ We have a large propane dealer in the Poconos that we deal with. One of our interesting customers – we do about 1,000 cars in Rome, New York – is Sovena, an olive oil company. They bring boatloads of olive oil into New Jersey, they tank car it up to Rome. They have a $187 million, state-of-the-art facility for bottling and processing olive oil.”

In addition, Genesee Valley Transportation Company operates a small, five-mile railroad in Batavia, New York adjacent to its own 22,000 square foot, rail and truck Batavia Transload Warehouse, built in 2009 to accommodate customers who cannot handle railcars at their own facilities. Monte Verde is particularly proud of the Batavia operation because it allowed Genesee Valley Transportation Company to recapture customers who had become habituated, over time, to relying on trucks to haul their commodities. The warehouse was the brain child of GVT’s deceased partner Chuck Riedmiller, who envisioned capturing area business that didn’t have direct rail service. “When we took that over the Batavia trackage from Conrail, the track was dilapidated and there were less than 200 cars,” he relates. “Last year, we did 1,400 cars in Batavia because we worked with the local businesses. We gave them opportunities to go back to the railroad; we gave them better rates and cost savings where they could say ‘I don’t have to haul my stuff from St. Louis to Batavia, New York on a truck all the way – I can bring it by rail.’”

Examples of customers that Genesee Valley Transportation Company has lured away from shipping by truck include a gypsum manufacturer, a birdseed distribution company, and a nearby scrap dealer. “They were bringing things in and shipping things out by truck,” he says. “With our warehouse and our transfer facility in Batavia, we gave them the opportunity to bring their scrap two miles to our railroad siding, put it in a railroad car, ship it to Pittsburgh or Indiana, and save their own trucks from doing all those roundtrips, saving them thousands of dollars. One boxcar can accommodate what would normally fill four truckloads.”

Monte Verde is quick to explain that even though GVT is now doing well, it has only done so by carefully and assiduously cultivating new customers, and then serving them well. “There were days when Conrail was not doing too well and service was poor. When we took these railroads over, we had to go back to the customers and sell them that rail service was worth it; that we would be there every day. When they came to work at eight o’clock in the morning, and when they’d slide that warehouse door open, there’s going to be a boxcar there. We complement the big railroads with the final mile of friendly, customized, customer service. If you ran out of product at 9 o’clock that night, and at 8 o’clock tomorrow morning, you’re going to start up, we would run something at 6 o’clock in the morning so that you would be able to continue your business. We strive very hard.”

Monte Verde is quick to give all the credit for GVT’s success to his employees. “The people make the company,” he exclaims. “I am really happy with the people we have working for the company. My biggest pride is the fact that they do their jobs safely and the customers are happy.”

As a boy, David Monte Verde became attached to the Lackawanna Railroad, and as an adult, he honed his passion by collecting railroad memorabilia, and studying railroad history. Today, as President of the Genesee Valley Transportation Company, he continues to stay true to that passion, by providing his own railroad’s customers with safe, efficient, and friendly rail service.

Check out this handpicked feature on FiberGlass Coatings, Inc. – Composites for one and all. 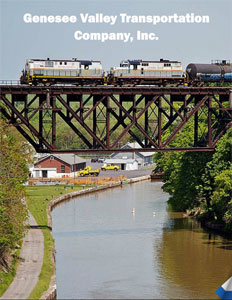