Watertown Regional Airport, is a public-use, commercial service airport located two miles northwest of the City of Watertown in Codington County, South Dakota. The airport covers 919 acres and has two runways: Runway 12/30 is 6,898 by 100 feet, and Runway 17/35 is 6,893 by 100 feet. Todd Syhre, the Airport Manager and a five-member Board of Directors, appointed by the Mayor of Watertown and confirmed by the City Council, oversee operations. Watertown Regional Airport has 54 general aviation aircraft based on the field and the numbers continue to grow. Eight privately-owned hangars and 32 T-hangars, owned by the city and leased to aircraft owners, provide safe storage out of the elements.

Walter Cooke, a local music store owner, established the first airfield in 1917 after purchasing two airplanes. Cooke and another pilot flew exhibitions at the airfield and, according to local lore, night landings were accomplished by “following the lights on Kemp Avenue.” During World War II, the airfield was developed and operated by the United States Army Air Forces as a Second Air Force cold weather bomber training base, as an auxiliary to Sioux Falls Army Air Field, and by Air Proving Ground Command.

It was then that the airfield was expanded into the current layout to accommodate the B-17 Flying Fortress and the B-24 Liberator units that underwent advanced training at Watertown Army Air Field before deploying overseas for combat missions. After the war, the government released the land to the City of Watertown, which has owned and operated the airport ever since. Watertown Regional Airport has a 24-hour staffed Aircraft Rescue and Fire Fighting (ARFF) station on the field, which provides rapid response to events on and off the field for the City of Watertown. In addition, there is a military shooting range on Airport property, leased by the South Dakota National Guard.

Commercial air service is provided by SkyWest Airlines operating as United Express under the Essential Air Services (EAS) program. SkyWest offers two daily flights to Denver in 50-seat Canadair Regional Jet 200s. The Airport has seen considerable growth over the past several years with passenger loads exceeding 11,000 in 2017; 13,000 in 2018; and on track for 16000-plus in 2019. Daily service, direct to Chicago, is scheduled to begin in September 2019. 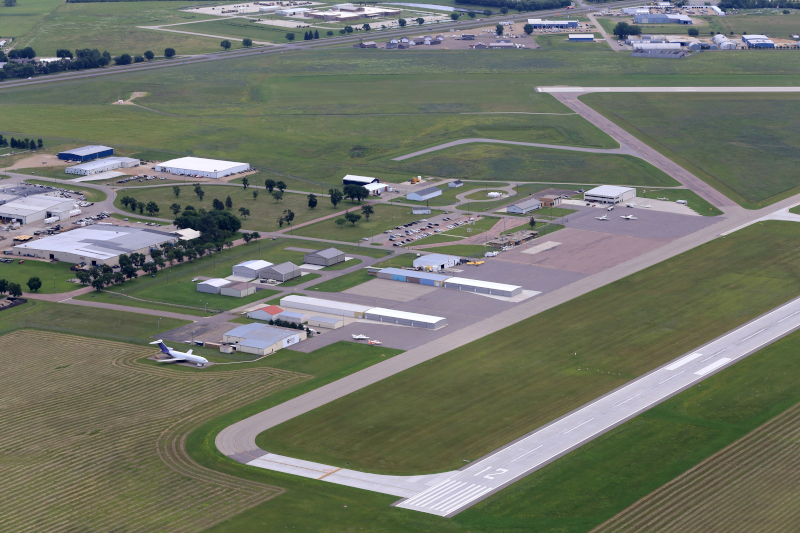 The Airport also hosts several other air-related services. “United Parcel Service (UPS) has daily service and a few other cargo companies utilize the Airport regularly,” says Airport Manager, Todd Syhre. “Sun Country Airlines has provided charters in the past and, with improved facilities, we hope to re-establish these flights.” Football and basketball team charters for South Dakota State University (SDSU) and other regional teams find Watertown Regional Airport convenient to use. In addition, there is daily corporate air traffic supporting several local businesses

The Airport is also home to the Lake Area Technical Institute (LATI) Aviation Annex. Founded in 1965, LATI was the first technical school established in the state of South Dakota. “In 2017, LATI won the Aspen Prize for Community College Excellence, which recognizes the school as the number one technical school in the nation and, furthermore, they have consistently rated in the top five technical schools in the nation ever since the Aspen Prize was established,” Syhre reports. “The LATI Airframe and Powerplant (A&P) program averages about 40 students a year with local, regional, national, and international students. And its graduates have been highly sought after in the industry throughout the country. The main campus of LATI provides a well-trained, ready workforce for the industrial sector in a wide variety of trades.

“In addition, LATI is expanding its aviation program offerings this year to include a professional fixed wing pilot training program. Pilots completing the curriculum will graduate with a minimum of 250 hours and commercial pilot, single, and multi-engine ratings. Students will also have the option to earn a Certified Flight Instructor rating which will accelerate their progress towards a career as a professional pilot. They are also exploring expanding the flight program to include rotorcraft (helicopter) and drone training within the next ten years. As demand has been strong for all of their educational programs, they are expanding into much needed, and recently acquired, hangar space on the field to store and maintain their growing fleet of aircraft.”

ATY Aviation is Watertown Regional Airport’s family owned and operated Fixed Base Operator (FBO). The Yost family acquired the FBO operation and recently celebrated their 1st year in business in Watertown. John Yost is an experienced A&P IA (Airframe and Powerplant mechanic with Inspection Authorization) and also a 1985 graduate of the Lake Area Technical Institute A&P program. It’s a full-service shop with hangar space available for larger aircraft, as well as quick-turn service and de-icing options. In addition, flight training has just been added as another provided service. The most popular that the FBO offers, however, may be the free ice cream they provide to pilots utilizing the facility.

Watertown Regional Airport is experiencing unprecedented growth and exciting expansion plans are underway. “Therefore, we have several construction projects in progress to meet the current and future needs of the region,” Syhre states. “To begin with, we are replacing the commercial terminal apron this summer. Then, the largest project we are looking forward to is a new commercial airline terminal scheduled for 2021-23. The current terminal is over 50 years old, and with the growth we’ve seen in commercial service in the last few years, the old terminal is less than half the size needed. In addition, post 9-11 security changes and Department of Homeland Security and TSA requirements have well-exceeded the available space and design of our current terminal. Standard planning factors were used to create a plan and request funding from the FAA for a 20-25,000-sq.-ft. terminal with a projected cost of approximately $17 million. As is typical, the bulk of the funding will be provided by the Federal Aviation Administration (FAA) with state and local matching contributions expected. Also, on the list of projects is completion of a new taxiway to create a full parallel taxiway to Runway 35. The FAA has been funding this type of project to remove any taxiway intersections with greater than 90-degree corners to reduce ground accidents and runway intrusions. So, within ten years, we will be moving Taxiway Bravo to line up with the parallel.”

The city of Watertown is a vibrant, growing community that depends heavily on its regional airport to support the robust industrial, educational, and recreational opportunities that await its residents and visitors. The Historic Goss Opera House is currently under renovation and modernization to restore it to its 1890’s vigor in the new age. “We are also the birthplace of the release of the Chinese Ringneck Pheasant, which has become a recreational haven for upland game hunters,” Syhre adds. “Lake Kampeska, a 4,000-acre lake within the city limits draws people from all of northeastern SD for water activities and the walleye fishing in the region is second to none.” Primarily an agricultural community, Watertown is also supported by a large and growing industrial presence. And with no state or corporate income taxes, coupled with a low cost of living, Watertown is a desirable community to start or relocate a business.

In addition to serving the greater Watertown area as a regional economic driver, Syhre says that the Airport strives to be a friendly neighbor and one that displays the “joy of aviation.” In this effort, Watertown Regional Airport and Lake Area Technical Institute are annual hosts to the Experimental Aircraft Association Young Eagles program, which gives free introductory airplane rides to youths 8-18 years old to introduce them to aviation. In addition, they host an annual glider event where powered and towed gliders from all over the region descend on the Airport for a weekend of flight, tours, and camaraderie.

Some recent air show highlights at Watertown Regional include a 2018 flight demonstration by the Barnstormers, a group of open cockpit Travel Air biplanes built between 1927 and 1932. “We had a fantastic turnout with the Barnstormers,” says Syhre. “The Watertown Regional Airport has all of the amenities of a big city airport with a small-town feel. If you ever get a chance to stop in please check out all that the Watertown Airport has to offer.”

WHAT: A public-use, commercial service airport

WHERE: Two miles northwest of the City of Watertown in Codington County, South Dakota