Greeley-Weld County Airport – The best of everything

The best of everything

Forty miles north of Denver lies the beautiful City of Greeley, located in the High Plains of northern Colorado about 25 miles east of the Rocky Mountains. The city has an interesting history having been started as a Union Colony that was founded in 1869 as an experimental utopian community based on temperance, religion, agriculture, education, and family values. It was, and still is, an agricultural area that has continued to grow and embrace who they are. The Greeley-Weld County Airport is another source of pride in the community.

Airport Manager Cooper Anderson, shares, “Just to give a bit of context of how we got out here, the airport used to be on the south side of Greeley and was moved to our current location in 1944. Back then, it had just one runway and was called Crosier Field – named after Clarence F. “Red” Crosier, a local kid who championed the move of the airport to its current location. Crosier was killed in action in June of 1944 while on a pre- D-day bombing raid in a B-26 Marauder over France. The driving force behind moving the airport outside of town was to allow for some larger aircraft, airline service, and mail service.” The airport continued to evolve. Lights were added in the 1950s for nighttime operations and in 1978, the City of Greeley and Weld County jointly took control, created the Greeley-Weld County Airport Authority and actually hired their first airport manager. 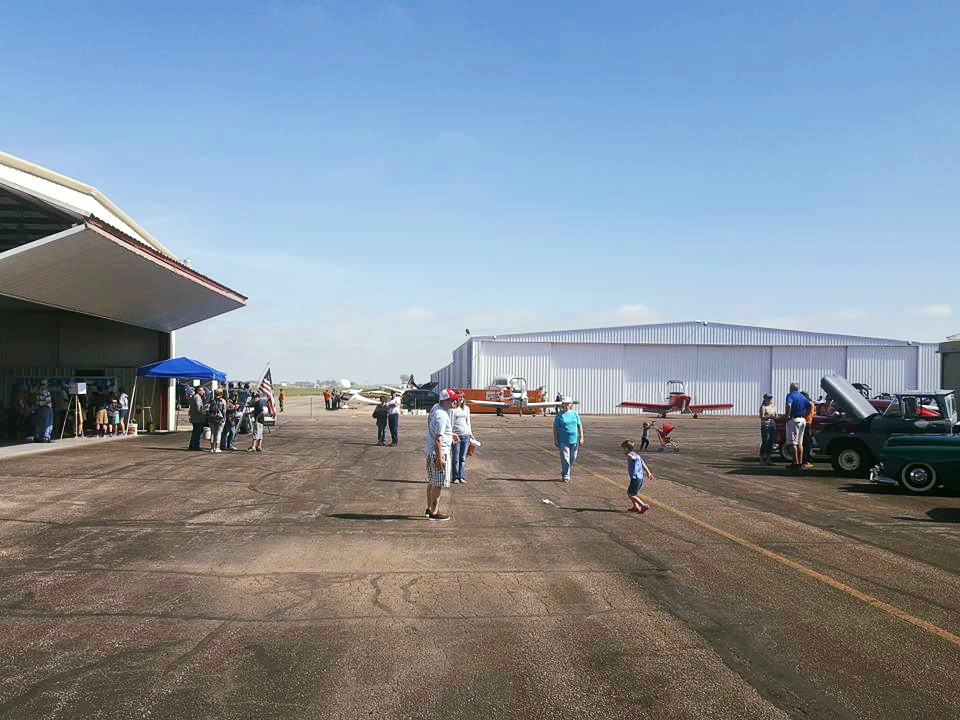 Those early years were just a starting point and growth was slow but steady. There were a few runway redesigns along the way, and in 1996 the airport acquired land to the north and built out a 10,000-foot-long, 100-foot-wide, runway – now known as 17/35. The long runway made it much easier to navigate Colorado weather, business began to pick up, and a new terminal and ramp were built on the west side of the airport property. “All of that really got us up to the 21st century,” says Anderson, “and it allowed for conference room space,  a restaurant… in fact, the Barnstormer Restaurant has been part of our airport for 35 years and is the perfect place to fly in for the famous $100 hamburger. Recently, we’ve completed an addition to our terminal to allow for a larger conference room which now seats 65 people and makes the whole facility more comfortable.”

The Greeley-Weld County Airport sees over 110,000 estimated operations annually, of which 66,000 are local, 44,000 are general aviation using the airport, and about 500 are military. There are 173 single-engine aircraft, 40 multi-engine, eight jets, and three helicopters based on the field. “That doesn’t include anywhere from 40-60 planes that are in the repair shops at any given time,” quips Anderson. “The truth is, we are maximum capacity right now between the airport-owned hangars and the privately leased ones. It is both a good thing and a problem that we are full.”

There are possibilities for growth, though, including a parcel on the east side of the airport directly adjacent to runway 35 east of the C1 connector. It’s a corner piece with about 60 acres of buildable area, located right off the new Weld County parkway with direct access to the Denver metro area. Anderson reports, “Just last week we completed an aerial visual of what the taxi lanes and everything in that area is going to look like. If all goes according to plan, we will have an initial corporate row of 200 x 100 foot hangars. We are hoping to fit three of those in there and then we’ll expand out to the north side. I think we can fit another 40-80 hangars there depending on size. We’re looking to start that complex, hopefully, within the next year. We are currently in talks with the city and the county to discuss incentives and economic development with the area to attract new tenants.”

There are four maintenance facilities based at Greeley-Weld: Advanced Aero Technologies Group, Western Plains Aviation, Hangar1 Incorporated, and Beegles Aircraft Services. The full-service FBO is Peak Flight Support and they offer everything from fuel to catering. Add to that a couple flight schools, medevac, and countless other aeronautical businesses and this is one bustling general aviation airport. Part of the reason so many businesses operate there is the Aviation Development Zone (ADZ) Tax Credit. The ADZ attracts aeronautical businesses to the airport by providing tax credits based on the number of new jobs created. The city offers other incentive zones on some of the property surrounding the airport as well.

Anderson credits the smooth running of the airport to two things. First, is the Airport Board that is made up of two city council members, two county commissioners, and three at large members who are either tenants or pilots. This means there is always a good portion of Board members with a vested interest in aviation, who have the background to understand how things need to happen. Secondly, there is a lean airport staff of six people who work well together and get things done.

“We have an operations supervisor and a business manager and me,” says Anderson. “Then we have three maintenance personnel that take care of all the mowing, plowing, light maintenance, and the buildings. We have an incredible amount of work to do sometimes, especially in the winter. Our three maintenance personnel are incredibly busy with snow removal, so we help them out. I get in one of the large plows, the ops guy gets into a plow, and our business manager gets in a plow. We aren’t afraid to get our hands dirty out here – it makes for an interesting time and it gets things done.”

The county and the city both want to keep the area “light industrial” and the airport itself tries to focus on aeronautical enterprise, which allows for manufacturing and other corporate businesses to be located nearby to a crucial transportation hub. While the county and city are great partners and assets to the airport, the airport is a great asset to the county and city in being able to attract new business to the area with a promise of a great airport nearby. The airport works to maintain its low lease rates and not overburden aeronautical users by finding other revenue streams to complete capital projects. They have been creative in working with energy resource companies to bring in extra revenue.

Anderson recalls, “Back in 2010/11 there was a big oil and gas boom out here and the airport retained all the mineral rights on the property. We leased out the rights to a few of the companies, and at the height of the boom we were bringing in $1,000,000 in revenue for royalties. Over the past few years, we’ve averaged $100-200,000 thousand in royalties going to our capital account. Royalties slowed down so we got creative with how we can start bringing in that kind of money for capital projects again. We’ve started to grant easements for pipeline companies as another revenue stream. With our large property, the pipeline companies only have to deal with one entity, and can utilize areas of the airport where a pipeline will not interfere with current or future aeronautical operations. “

Three years ago, the airport leased 13 acres to Green Leaf Energy in an area that wasn’t feasible for building hangars. It was a hybrid lease for the company to set up a solar farm. The airport also receives energy from them at a reduced subscriber rate, so it ends up being a win-win situation.

The Greeley-Weld Airport has many benefits, both economically and from an aeronautics point of view. There are two main runways that run north/south and east/west allowing for takeoff and landing whichever way the Colorado winds are buffeting. The longer runway, at 10,000 feet, has an instrument landing approach (ILS), and all runways have a GPS approach. The airport is not subject to any controlled airspace, so departure times and turnaround are very quick for those picking up IFR clearances. The airport also benefits from its geographic location in that it usually totals less weather disruptions than the rest of the front range.

According to Anderson, “If you are thinking of bringing your business or building a personal hangar out here, the main incentive is that we have one of the lowest lease rates, as close as we are to the Denver Metro area and the I-25 corridor. So this is the best of both worlds, you’re close to the Northern Colorado and Denver metro areas and you have an affordable place to build. With the front range expanding, we expect to see an influx of new building and invite anyone interested to come see us.”

Anderson believes his airport is the best choice, adding, “We have great infrastructure and really, in my opinion, the best operational capabilities out here for your everyday flyer right through to your large corporate operation. Greeley-Weld County Airport offers the best of everything with good access to the Metropolitan areas. It is that combination that makes us a success.”

What: A thriving general aviation airport