When you picture the wild west with those imposing red stone cliffs, bluffs, mesa, and mountains – you could be dreaming of Sedona, Arizona. This desert resort town located 90 miles from the fastest growing metropolitan in the nation is surrounded by natural beauty; the red-rock buttes, steep canyon walls and pine forests glow orange and red with the dazzling sunrises and sunsets.

Now imagine landing your plane on a mesa, up above the city, where the Sedona Airport takes up a commanding 250-acre view from its mountaintop perch. “It is kind of like landing on an aircraft carrier,” says Edward A. Rose, Airport General Manager with a chuckle. “We are on a mesa right smack in the middle of downtown Sedona, 500 feet above the city!” 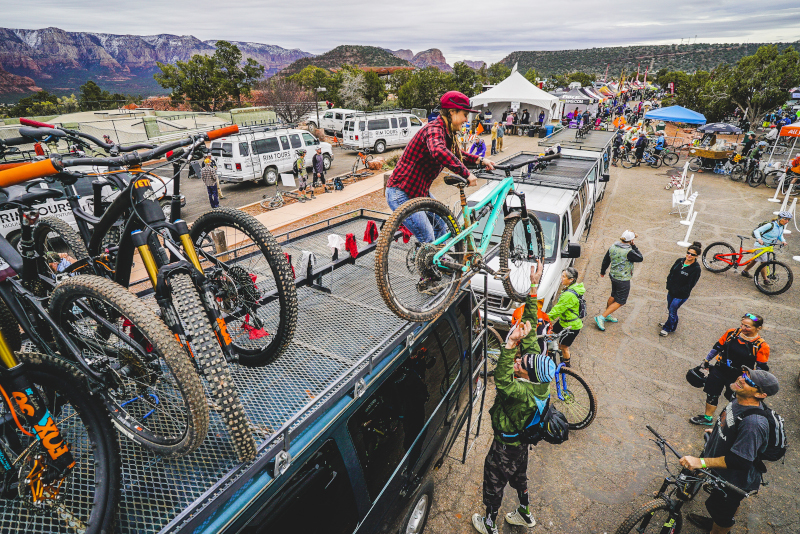 The Town of Sedona is known for its outdoor recreation and beautiful vistas, vibrant arts community, fine dining, and spiritual health and wellbeing. It is a town that is alive with passion and culture, and the airport is an amazing launchpad to all that it has to offer.

The airport first began to take shape in 1956, and by 1957 there was a 3,700-foot runway and four aircraft based on the strip. As the Sedona community grew, the airport kept growing along with it… a small hangar, runway lights, and a phone booth were soon set up. By 1968 the runway was extended to 5,130 feet, a little shy of its current 5,183 feet. Through the 1970s, Sedona Airport continued to expand and airport facilities, taxiways and aprons, as well as hangars, were constructed to allow for the 12,000 operations they were seeing yearly. All this in a town of what was then only 5,000 people.

In 1982, Sky Ranch Lodge and Motel opened for business on top of the mesa with 35 units. It now has 94 attractive accommodations and is a beautiful resort within walking distance of Sedona Airport. At present on the Mesa, there are 11 different companies providing flights, tours, charters, flight instruction, and aviation services in addition to lodging. Sedona Airport, itself, is operated by the Sedona-Oak Creek Airport Authority on behalf of Yavapai County. As a General Aviation airport, most of the clients are individual owners, with some corporate aircraft, and also several tour operators flying out of Sedona. The nearest regional commercial airport is located in Flagstaff, 28 miles north through scenic Oak Creek canyon.

“Our current FBO is Red Rock Aviation,” says Rose, “and they provide top quality aviation services for everything from the smallest of aircraft right up through the largest of corporate and personal jets. They also have a small terminal building with all the amenities. Add Sky Ranch Lodge and the award-winning Mesa Grill restaurant with Chef Mercer and this is the perfect place to get away from it all.”

The airport also has a number of aviation businesses as tenants. Rose reports, “If you would like to see the area from a balloon, you can check out Red Rock Balloons. We’ve also got two helicopter tour operators – Guidance Air and Red Rock Helicopter Tours. Then there is Sedona Air Tours if you would rather see the sights from a plane. There are several car rental places right here in the terminal, as well. So, we really do have everything you need.”

Rose has been on board as GM at Sedona Airport for a little over a year and has an extensive background in the aviation industry. He sees so much potential for the airport and its growth. The one major factor which holds things up is something that most airports have no worries about – water.

“We have 99 hangars on the field with only 30 owned by the airport authority,” Rose reports. “That means the majority are privately owned, and we do have a waiting list. I’m eager to erect some additional hangars but, being out in the desert, the problem really is water. Fire suppression water, specifically. A study was conducted to see what delivery systems would be necessary to support expansion as identified in the airport’s master plan, but much-needed improvements must come first. This includes $23 million worth of capital improvements starting with replacing the fuel farm for $2 million.” 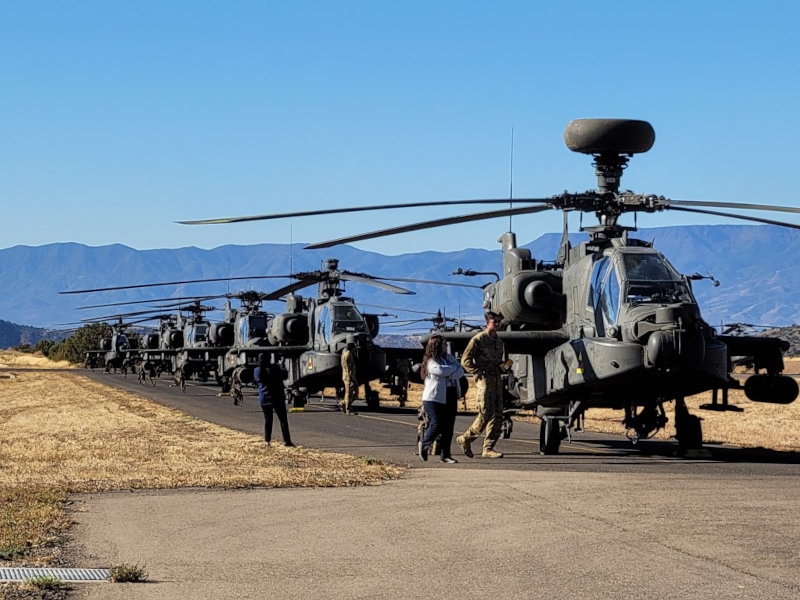 Additional work on runway safety areas includes a full-length parallel taxiway to stop 1000 feet of back taxiing, and excavation to correct a full-length swale too close to the runway, rehabilitation of the aprons and taxiways, LED lighting, and a look at going solar. Another project that will need to be investigated is upgrading the communications system.

“We are also looking at purchasing a parcel of U.S. Forest Service property to make environmental improvements,” Rose adds, “so we can better manage vegetation and habitat in proximity to the operating services. We’ll also have to do some geometry corrections, which the FAA is going to require in terms of runway intersections. Ours are currently straight into the ramp and the new requirements have at least two 90-degree angles. So, there is some work to be done there as well.”

Sedona Airport has 32,000 operations a year right now, and although there was a slowdown in March and April of 2020 when impacts of the COVID-19 pandemic began, they took that time to fill 8,000 linear feet of cracks, and shortly after that business took off again. According to Rose, “Our trajectory had just gone nuts the first quarter of this year. It was the best quarter ever, historically, and up by 100 percent or more than any previous quarter recorded. Business is booming, and people are beating down the door to get up here… we just need to get the infrastructure in place first so we can expand.”

Rose points out that being in the middle of the town makes the airport a real economic driver, bringing in some $76 million in revenue to the local economy. The airport also makes an incredible introduction to the region for tourists who come via plane. But more than that, it promotes aviation in a fun and visible way.

“We do whatever we can to promote aviation,” Rose adds, “from the young Eagles Program to outreach programs. We are also not far from Prescott, which is the home of Embry- Riddle Aeronautical University and there’s a big draw for aviation-minded folks to the university and its offerings. What we hope is that they will take that knowledge and come back to work at airports like Sedona. We have a couple of their students coming here for internships now; one is doing a major in airport management and so we’re going to give that young lady some additional management experience over the summer. Another fellow is interested in the pilot side of aviation, so we’re going to expose him to the line services or Red Rock Aviation portion of our business. A lot of young people are looking at the industry right now. We just need someone to spark their inspiration and help them see the possibilities, so I am happy that we get to foster and perhaps mentor them in their future aviation careers.”

Red Rock Aviation has a staff of eight, and Rose has been instrumental in helping them to do all the training and certification they need to rise in the ranks and be fully qualified for all exigencies. That begins with the N80A safety certification, and then on up through airport safety operations specialist and then on to the advanced courses. Any employee who shows interest is given the opportunity to better their training, and in so doing, the professional standard of the airport rises as well.

The overall vision is for a better airport that offers top-notch facilities not only for the local flyers but for anyone who would like to make Sedona their vacation destination. From the airport, you can literally see everything, and figuratively find a way to see even more. The Sedona Airport is well on its way to modernization and there is no stopping them now.

What: A robust general aviation airport with a fabulous mesa location

You’ve arrived in so many ways- – as a leader, an influencer, someone whose decisions turn a vision into reality.

We can make your next arrival a memorable one  –  and your next decision easy  –  by suggesting you choose Sedona as your newest destination.

When you descend to Sedona’s spectacular modern airport atop an ancient red rock mesa, you arrive in a way few ever experience – with a breathtaking view shared only with the soaring bald eagles that nest along the nearby Verde River.

Once your feet are on the ground, your spirit continues to soar.  Decide on a brisk hike to savor Sedona’s inspiring vistas – an experience that clears the mind and recharges your creativity.

Resolve to rediscover the need to dream big as you silently glide above the burnished glow of the red rocks at sunrise in a private hot air balloon excursion, followed by the traditional champagne toast.

Choose to refresh body and soul at our nature-inspired spas, where you luxuriate in open air massages alongside burbling Oak Creek, hot stone treatments incorporating our famous red rocks, or an all-day spa package.

Decide to partner with Sedonans in our environmental commitment and embrace the Sedona Cares Pledge and principles of Leave No Trace; tell the world you are a Red Rock Country difference maker, just as you are in your business and community.

Leaders seek new horizons, hidden gems, and fresh inspiration. Our region is bursting with all three. The Grand Canyon beckons, just a two-hour drive through stunning Oak Creek Canyon, named by Rand McNally as one of America’s most scenic drives.  Sedona’s Secret 7 lead you to unique southwestern adventures most will never experience. Tour the vineyards and tasting rooms of the Verde Valley, whose unique soils produce wine of such quality it was named a Top 10 Best Wine Region in the 2020 USA Today Reader’s Choice poll.

Arrive  in Sedona – in so many ways.

Legal Guidance You Can Trust

When it comes to legal guidance, ‘trust’ is more than a word at the Law Office of Tony S. Cullum PLLC. It’s a mantra we follow every step of the way for building honest, peace of mind client relationships.

Our Law Office based in Flagstaff is a hardworking law firm dedicated to putting our clients’ interests first. Our friendly staff provides caring and professional service to resolve your legal matter. Whether you need assistance with estate planning, the probate process, a real estate transaction, or other law-related concerns, we are the specialists to call.

For more than 45 years, our firm founder, attorney Tony S. Cullum, has been helping clients throughout Arizona resolve their legal matters. An experienced legal professional, Tony has an in-depth understanding of the law, especially in estate planning, probate administration and real estate. In addition, he is certified as a specialist in real estate law by the Arizona Board of Legal Specialization. Tony has earned the respect and trust of his colleagues and clients alike. No matter what legal challenges you face, he can guide you toward a successful resolution.

At the Law Office of Tony S. Cullum, we will put your needs first as we advocate for your best interests.

Starting from the Prescott Regional Airport or the Sedona Airport, guests will be whisked away in their own private helicopter through the red rocks of Sedona or soar over the lakes of Prescott. Choose from our fun 12-15 minute tour or a 2-hour round trip flight. We also offer partnered hiking excursions to the Grand Canyon or romantic sunset dinner flights. For details call 925-351-1000 or visit www.guidanceair.com

The Mesquite Metro Airport – Not just...