“It is always important to know where you came from in order to know where you are going,” says Steven A. Gould Jr., Airport Manager of the Rock Hill-York County Airport. “So that being said, the Airport is the vision of Mayor Emmett Jerome and the man he appointed as Chair of the commission to investigate the possibilities, Dr. H.H. Plemmons.”

In 1956, an Airport Commission was established to develop an airport to serve the Rock Hill area. The Airport Commission located a 364-acre tract at the Old York and Celanese Roads intersection and the Rock Hill City Council approved property purchase and acre-for-acre exchanges to obtain the necessary land. In 1958, Rock Hill City Council applied for a federal grant to construct the Airport from the Civil Aeronautics Administration (CAA), the predecessor agency to the FAA. The CAA offered the City a $126,000 grant to perform site preparation, paving of air operations areas, runway/taxiway lighting, and landscaping. 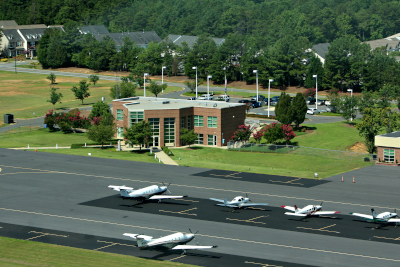 “So those two men along with another gentleman, Bob Carol, led the charge in finding the right location for the Airport,” explains Gould. “At the time, all we had was a privately-owned grass airstrip called Roddy field. The Roddy’s were a local family who used the strip for their own aviation purposes. But these men had a vision and understood that they were missing out on some opportunities from a competitive standpoint. There was a need for an airport to have corporate flyers being able to come in and out, as well as having a place for private aircraft to operate. During those times, aviation was really starting to kick up, especially with World War II ending just ten years prior.”

So, right from the start, there was a thought that the airport would be an important factor in community development. Gould continues to work for this vision and, these many years later, Rock Hill-York County Airport bills itself as a real alternative to the much larger and busier Charlotte Airport, with facilities that offer quick, streamlined arrival and departure capabilities for general aviation. Add to that a 7,200 square-foot terminal building designed for the business user with a large conference room available for use and a large concourse area downstairs that includes a pilot lounge, pilot shop, and flight planning facilities, and you have something to meet every need possible.

Rock Hill-York County Airport is owned and operated by the City of Rock Hill. A joint City/County Airport Commission advises the City Council on operational matters and advises both the City and County Councils on planning and capital improvements.

“It is all private and corporate type of traffic,” says Gould. “We have seen in the last few years, a large uptick in our corporate flyers, and we are getting a lot more jet traffic to the point where we have a major focus on the development of the Airport from that standpoint. We just completed our largest pavement project ever and, actually, the most costly project in the Airport’s history. It was a full rehabilitation of all of our taxiways system, which also included widening the turning radius of all the taxiways and relocation of two taxiway connectors. This was a $4.1 million project and I think of it as the last piece of the puzzle for rehabilitating all of our pavement at the Airport. It started back in 2012, with the rehabilitation and overlay of our runway which is 5,500 feet and then in 2014, we did a full rehabilitation of our apron space and that’s about 400,000 square feet of aircraft space and utilization.”

There is sort of a Field of Dreams “If you build it they will come” reality to this work, but it is also a nod to the increase of traffic and the increased size of airplanes. The municipality has been negotiating with the Federal Department of Transportation since the late 90’s to get a runway extension and bring it up to 6,500 feet.

“We used to be one of three reliever airports for Charlotte Douglas,” says Gould. “Now, we are one of two, us and Charlotte-Monroe Executive Airport that are the true relievers for Charlotte Douglas. Concord regional was the third but they are now doing business with Allegiant Air. Both Monroe and Concord each have at least a 7,000-foot runway, so it puts us at a disadvantage when it comes to getting the larger corporate flyers here because they need that infrastructure to be able to get to and from their destinations in a one-stop scenario.”

When it comes to expansion, the Rock Hill-York County Airport is now focusing on its vertical structures. “We are extremely lacking in hangar space,” Gould admits, “so over the past few years that has been my driving force – trying to get any private development out here that is willing to invest in the Rock Hill-York County Airport and put up more hangars. We have just completed a 19,000-square-foot hangar facility, which includes a combination of eight T-hangars and four medium-sized box hangars back in February of this year. And then, we entered into negotiations with our FBO (Fixed Base Operator) Skytech, which would restructure their lease and allow them the flexibility to construct a 12,000-square-foot, common shared hangar. They are in the design stage of that right now with plans to have that hangar completed by the first quarter of next year. And then, even after that, we have a couple of individuals looking to build anywhere from a 6,000-square-foot hangar all the way up to a 10,000-square-foot hangar to add additional space.”

Gould is adamant that the FBO get a lot of the credit for the day-to-day operations of the Airport. From his point of view, it plays an extremely vital role in the Rock Hill-York County Airport but often goes thankless for what it does. “Skytech Inc. makes up for the fact that I am the only full-time city employee that is staffed here on a regular basis. I have to rely on them for a lot of different aspects of making sure that daily operations are running smoothly and they are such a top notch, first class, facility that it would be poor on my part if I did not make sure I mentioned how critical a part they play in making sure that we continue to be successful and ensuring that everyone who comes here is blown away by the facilities and the customer service level that they receive from Skytech.”

“We are not self-sufficient,” Gould adds, honestly. “That is the number one goal of all airports, especially general aviation. That is also probably the hardest place for general aviation airports to get to. So, right now, my operating budget is about $400,000 annually, and my direct revenues, which include things like ground use rental costs, fuel flowage fees, and different concessionaire fees go directly back into the budget to try and offset costs; and that usually accounts for about 50-65 percent of the costs. The remaining comes out of the general fund. And then, when it comes to capital projects, we receive about 90 percent from the FAA whenever they are approved projects, then 5 percent from the South Carolina Aeronautics Commission, and then the other 5 percent is actually split 50/50 between the city and the county. That is one of the things we are very fortunate compared to other airports in the state, which are typically county-run and they are on the hook for the whole 5 percent. But, we split it up 50/50.

There is also a flight school on site, Fly Carolina. Their business has been growing and they do also offer some maintenance on the field. Another group using the Rock Hill-York County Airport is the local chapter of the EAA (Experimental Aircraft Association), which has various events throughout the year including multiple Young Eagles rallies. This is a program that allows children between the ages of 8 and 17 to have free introductory flights to try and get them interested and engaged in aviation.

“There are two parts to what I like to push out there,” Gould states. “One is that we are extremely business- friendly. And on the other side, we are extremely community-friendly as well. We have a couple of different programs that I have put into place since I have been here, which try to promote aviation. There used to be a time when South Carolina was considered a black hole when it came to aviation, and nothing could be further from the truth. We have had an economic impact study done on a state level, and they have looked at all the different state airports. What it showed for our airport is that over a ten-year span, the economic activity went from $6.9 million in annual economic activity to now being $40.5 million annually.” 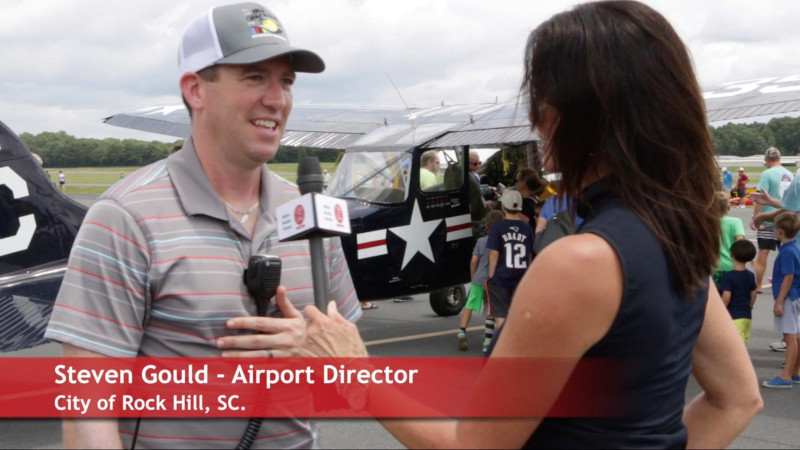 “So my job,” he continues, “has been to foster the mindset that we will do everything in our power to ensure that your business can be successful while utilizing this Airport and making sure that your needs are met to the fullest extent possible, while at the same time, being cognizant and respectful of our local community to make sure that we have as little impact on their quality of life as is possible.”

As an example of Rock Hill-York County Airport’s commitment to community involvement and cooperation, it put in a voluntary noise abatement policy that has been very well received by the pilots and the local populace. There is also a conference room in the terminal building that Gould makes available to community groups, free of charge. He explains, “We probably have around a dozen different Home Owners Associations in this area, for example, and they utilize our facilities here and therefore get to see firsthand what is going on, on any given day. I also give different presentations to these folks to keep them in the loop as to what is going on so that there are no surprises for them. I want them to know that we are doing the best that we can to ensure that noise impacts are as minimal as possible for them, making sure that pilots are flying safely, and ensuring the most efficient way to have as little impact as possible on people who might be enjoying their regular day out in their yard or whatever.”

“It is like night and day from when I first got here to now in terms of the perspective of what the Airport is,” concludes Gould. “And a lot of people are really starting to understand and to see the importance that the Airport brings and what a gem it is having this resource here for our community.”

Check out this handpicked feature on The Roswell International Air Center – Potential unlimited.

WHAT: A general aviation and reliever airport 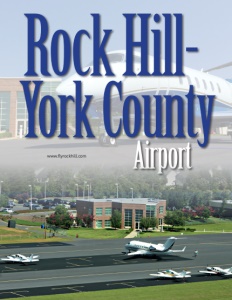