Walla Walla, in the southeast corner of Washington State, is a magical place where the beauty of nature reaches out and intermingles with culture and wine. Having been recognized among the finest wine regions in the nation, Walla Walla has exploded onto the scene with renewed vigor and robust growth. There are more than 120 wineries and 2,800 acres of grapes growing in and around a town that is bustling with a renewed passion for food, flavor and fun.

Jennifer Skoglund, Manager of Walla Walla Regional Airport, describes the local area from her unique perspective. “When you arrive at the Walla Walla Regional Airport you will find a commercial airport, with several general aviation users, a flight school, and because of the tourism, an additional influx of Net Jets and other private, transitory, jet traffic. And the community is just beautiful! In the last 15 years or so the wine industry has really blossomed. In 2019 and 2020, we were named by USA TODAY as the number one best wine region, so that’s brought a lot of accolades. Tourism has really taken off and the community has grown into a beautiful quaint downtown surrounded by vineyards, and it makes for this amazing synergy. So that now we have a growing foodie component, and the culture and arts community is growing, and there is a lot of history here… it is all just coming into its own.”

Owned and operated by the Port of Walla Walla, the Regional Airport sits on 2,319 acres with a 6,527 by 150 feet runway outfitted with precision ILS systems as well as a taxiway system. A  taxiway rehabilitation, grading, and drainage system was all completed in 2018. There is a control tower that is manned 12.5 hours a day, a commercial terminal that has a solar power system built on the roof, and an FBO building. The FBO, Gorge Aviation, operates seven days a week and offers 100LL self-service, Jet-A delivery & self-serve, aircraft maintenance, concierge services, rental cars, and aircraft storage.

The airport’s commercial service carrier is Alaska Air, which offers round trip flights to Seattle. This alternates between two and three trips per day. “We had built up a good service with three flights before COVID hit,” explains Skoglund, “At that time we were seeing a load capacity of around 75 percent on all three flights – and even growth that looked to be going beyond that. Then following March of 2020, we ended up with single-digit load factors and even when cutting back to two, and eventually one flight per day, we only saw an overall load factor of 43 percent during 2021. This year we had a fantastic summer and have worked ourselves back up to 85 percent load on two flights per day. In terms of the passenger numbers themselves, in 2019 we had 49,414 enplanements and in 2020 we had 18,668. Through September 2021 we are up to 28,444. Last year our tower reported 34,000 flights and this year we are looking at over 40,000.”

Skoglund credits the increase in tourism for most of this increased travel and even general aviation flights. The airport works closely with Visit Walla Walla, which is an active destination marketing agency for the valley. “They have done a really good job in promoting all of the different activities you can do here,” says Skoglund. “So, everything from wine and beer to hospitality and hotels. Walla Walla is well known for some of its private restaurants, cultural activities, museums, and for having three universities: Walla Walla University, Whitman College, and the Walla Walla Community College.”

Walla Walla University runs a flight school at the airport. Operating out of a large barrel hangar, their program and offices contribute to the energy and enthusiasm of the airfield while also promoting aviation as a career option.

Right now, all the hangars are owned and leased by the Port Authority – they are also full. However, there is room for additional construction and the airport is open to either leasing land for development, or perhaps building more hangars themselves in the future. There is also talk of building a specific GA terminal as a project that might position them for future growth.

“We have quite a large business park out here at the airport, as well,” says Skoglund, “and we have continued to have about 80 to 90 tenants on the property. That runs anywhere from wineries to breweries to a couple of manufacturing companies. There are also several smaller businesses. All of these tenants survived the pandemic, apart from one, and we continue to get a lot of calls for interest in leasing buildings and people needing space and we have been 100 percent booked.” 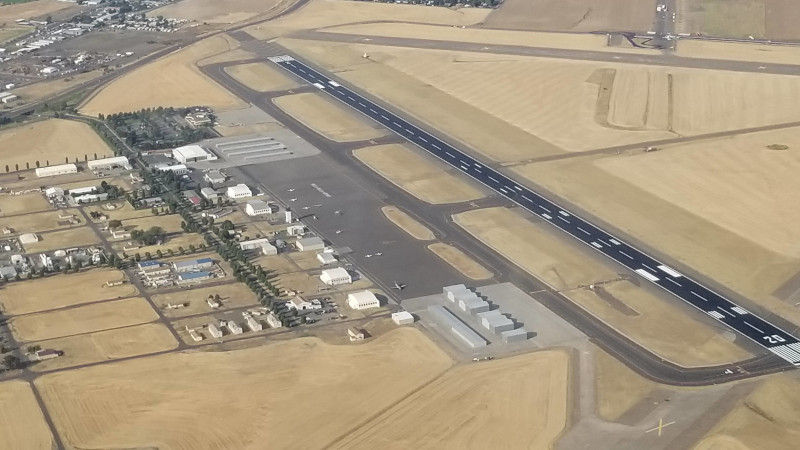 She adds, “These are certainly very interesting times and we are proud that we managed to not only keep our airport open but were also able to keep everybody on staff and never had a shortage of work. As commercial service went down, the General Aviation business went up and it kept a lot of things happening. I think this year has been a plus for GA and a lot of the public have continued to come out and spend time at the airport or go flying.”

Over the next three to five years Skoglund hopes to see a lot of continued infrastructure work at the airport. She reports, “We have been recipients of about $20 million in federal funding through the FAA’s Coronavirus Airport Response Grant Program and ARPA. That is going to help us get more projects done than we normally would have under our normal airport improvement program or discretionary monies. This will be a huge boost to the airport and allow us to rehabilitate more and more parts of the airport, including some of our older hangars and more of the terminal. There are also the necessary but less fun upgrades like sewer and water that we will be putting through. We hope that we will come out of this in a much stronger position, so that we will be looking at even more projects and development in order to encourage further growth.”

The other thing that Skoglund would really like to work on is continued growth and visibility. She acknowledges, “There are a large number of people moving into our community, and some of them will be moving here with aircraft, others will perhaps develop of love of aviation. But we are going to need to be building hangars and increasing our commercial air service. We don’t want to lose any opportunities and we want to be a place that delivers the service that people are looking for. There is so much growth potential.”

What: A productive commercial and general aviation airport