The Bozeman Yellowstone International Airport – Staking out the middle ground

Staking out the middle ground

The Bozeman Yellowstone International Airport (BZN) is located in Belgrade, Montana, eight miles northwest of Bozeman in Gallatin County. It is Montana’s busiest passenger airport, serving over one million passengers per year. Bozeman Yellowstone International Airport was first constructed as Gallatin Field in 1941. “A lot of airports were constructed at that time as aviation was expanding, and also to provide training for pilots prior to, and during, World War II. And we were one of them,” recounts Airport Director, Brian Sprenger.

“Our first airline service began in 1947 with Northwest Airlines,” Sprenger continues. “Like many smaller communities, we had minimal air service, but continued to grow over the years, and by 1967, we came into the jet age, with Northwest bringing the first jets here, as did our second airline, Frontier. They provided southbound service, while Northwest was east/west service. That started our first big growth period. We continued to grow relatively steadily over the next several years into about the mid-1970s, when Big Sky Ski Resort opened, and created exposure of the Bozeman area, starting a significant growth trend from that point forward.”

Today, Bozeman Yellowstone International Airport is served by seven major commercial carriers: Alaska, Allegiant, American, Delta, Frontier, JetBlue, and United. “Out of 450 commercial airline airports in the country, we’re 108 in the nation,” says Sprenger. “So we have a very significant airline component. We’ll handle about 1.35 million passengers this year.” BZN also has a cargo component – Corporate Air, operating on behalf of FedEx, and Alpine Air Express, operating on behalf of UPS. There is also a very significant general aviation presence at BZN. “We have around 350-based general aviation aircraft here and about 160 hangars on the field,” Sprenger adds. “We also have a very busy flight school that’s part of Gallatin College, which is affiliated with Montana State University.”

Bozeman Yellowstone International Airport is owned by the Gallatin Airport Authority, and, according to Sprenger, the Airport generates all of its own operating revenue. “We are absolutely locally self-sufficient,” he states. “We have not received any tax dollars from the state, or from our county, for 30 years. Much of this is because our growth over this time frame has been extraordinarily steady.  In fact, if you go back to 1972, we’ve only had six down years in that entire time frame, and those down years can be pinpointed to specific situations, such as the professional air traffic controllers’ strike, or a Northwest Airlines strike. We had a little bit of an impact back in 1988, with the Yellowstone fires, and, more recently, the simultaneous bankruptcies of Northwest and Delta Airlines in 2005. That had some impact because they were our two largest carriers, but we recovered within the year. And then, right after that, of course, the economy in 2008-2009 had a dip and most airports in the country were down double-digits. We were down about two percent and that was for one year. Since that point, we’ve been growing at about a six-and-a-half to eight percent rate. In the past two years, it’s closer to nine percent.”

Sprenger elaborates on Bozeman Yellowstone International Airport’s competitive advantages as compared to several other airports in the area: “As one of the major airports that serve Yellowstone National Park, we certainly compete against other airports in the region for passengers that are ultimately going to Yellowstone,” he notes. “There are many airports, even including Salt Lake City that we’re competing against – Jackson Hole, Billings, Cody, West Yellowstone, Idaho Falls. Our strength is we’re a year-round airport – West Yellowstone is not. We also have no constraints. Jackson Hole Airport is in a controlled valley inside Grand Teton National Park and so they have noise and operational limitations that we don’t have. We’re also the closest airport to two separate entrances to Yellowstone National Park, so we have some inherent advantages in terms of our operational and geographic situations.” 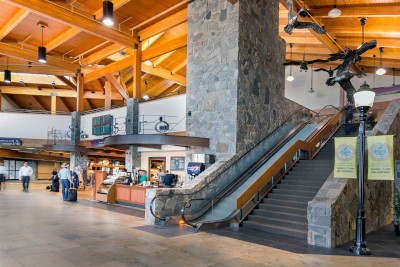 Sprenger adds that Bozeman Yellowstone International Airport is also the least expensive facility in the region. “One of the things that we can control is the cost of airlines being able to operate in our Airport, and we are, by far, the lowest cost airport for them to fly into. We also have a variable ease of entrance and exit for airlines in terms of leases, which means there is no penalty if there’s a fail. We really haven’t seen any fails, but it helps the airlines feel more comfortable to take that risk.”

Because of Bozeman Yellowstone International Airport’s rapid growth – it has essentially doubled its passenger count over the last decade – the Airport has continued to expand and upgrade its infrastructure. “We’re building the largest parking garage in the State of Montana,” Sprenger reports. “A $30 million parking garage to help support our rental cars, as well as paid parking. We’ll be building an additional $15 million, three or four gate concourse addition, here, to take us from eight gates to 11 or 12, with construction starting as early as next year. We just completed only one of eight new runways in the nation, since 2005. This new parallel runway is primarily for general aviation, separating our jet aircraft from our slower-moving aircraft that are used for our flight schools and general aviation.”

Regarding that general aviation population, one thing that Bozeman Yellowstone International Airport does not do is build hangars for it. “We encourage private development,” Sprenger asserts. “Our goal is to make sure our infrastructure will accommodate that growth, so we try hard to be ahead of that. So, as private development is needed, the area is already in place for new hangars to be built.”

Sprenger attributes much of Bozeman Yellowstone International Airport’s rapid growth to a considerable increase in commercial airline service. “Nine years ago, we had four destinations, nationally, that were year-round, daily, and we had four seasonal destinations,” he explains. “As of today, we’re nine destinations with year-round, daily service, and we have another seven destinations on a seasonal basis. So, we’ve seen significant changes in our airline service that benefits both the tourism economy, as well as the local business economy. When we look at the year-round destinations, at first glance, many people will look at our Airport and say ‘Oh, your success is because of Big Sky and Yellowstone National Park.’ Yet, we also see our shoulder seasons, our fall and springtime, are growing every bit as much and, in fact, the local originating passenger growth has grown at the same pace as the inbound growth of tourists and people coming to visit the area.”

If the present rate of growth continues, Sprenger insists that Bozeman Yellowstone International Airport will be ready for it. “We have a lot of room for expansion,” he avers. “We’ll be looking to develop the north side of the airport that serves the new parallel runway that becomes available as we move forward, so we’re in really good shape in terms of land. We control almost two miles off the end of each of our runways, which means we’ve got effective land use management to control potential encroachment from the community – especially within the approach paths of our two main runways.”

Sprenger believes that one of BZN’s greatest strengths is its ability to service all types of aviation operations. “There are many larger airports that focus on commercial aviation, and smaller airports that are focused on general aviation, but we’re in the middle ground,” he maintains. “We really work towards being an airport that is effective and useful for commercial airline operations, cargo operation, flight schools, general aviation, air medical services, and business aviation, because they all cross-pollinate. The mechanic at the local FBO is also going to be the mechanic on that airliner. The fueler that is going to fuel that Cessna-172, a couple of hours later is going to fuel a 757 or a 737. So, the ability to serve all that makes the businesses that do those services much more viable because there isn’t just one element that they’re relying on. We try to encourage all aviation, whether it’s general aviation or commercial aviation. And that’s one of the primary goals of our Airport. We also try to be one of the most cost-effective airports for aviation to operate out of,” he adds, in conclusion.

Check out this handpicked feature on the Aircraft Owners & Pilots Association – Your freedom to fly.

WHO: The Bozeman Yellowstone International Airport 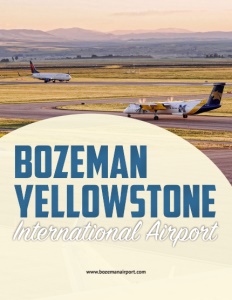