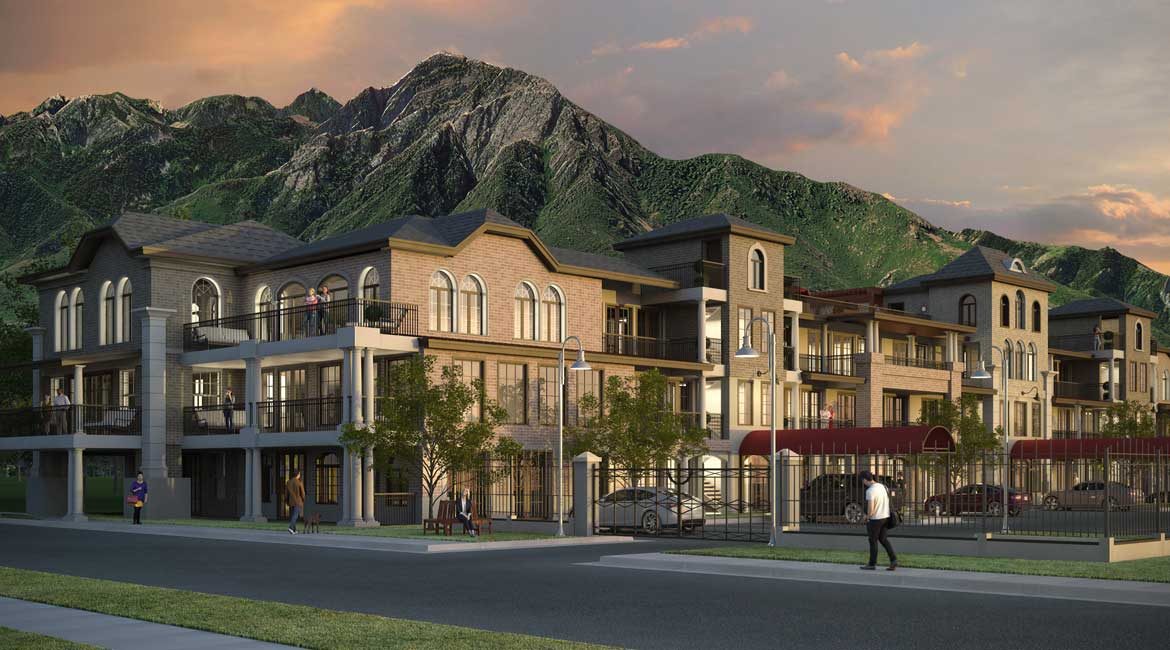 Holladay, Utah, located just a few miles southeast of downtown Salt Lake City, was first settled in 1847, when a group of Mormon pioneers, known as the Mississippi Company, entered the Salt Lake Valley and camped by the banks of a free-flowing, spring-fed stream they christened Spring Creek. Soon, families built homes in the area and set out to tame this land that abounded in springs, ponds, grasses, and wild flowers just west of the Wasatch Range and a few miles north of the Big Cottonwood Canyon.

Although Holladay is considered the oldest continuously inhabited settlement in Utah, it only became an incorporated city in 1999. This paradox has created some “interesting challenges,” according to Mayor Rob Dahle, who says that the community constantly wrestles with the need to develop a modern city infrastructure while still wishing to remain as undense, and un-citified, as practicable. “We’re kind of a unique community,” he says. “We’re a city in an urban area that wants to be as suburban as possible. So, how do we stay suburban in feel without getting too urban which is what we don’t want?”

Paul Allred, Holladay’s Community Development Director, believes that part of the answer lies in recognizing the city’s attributes and then capitalizing on them. “Let’s enhance our sense of place,” he says. “Let’s focus on why our community is so livable and let’s not do anything to disturb that.” Dahle agrees: “The reason people live in Holladay is because it’s a great community to live in,” he declares. “We don’t want to damage the reason that people live here – it’s got great public schools; it doesn’t have a ton of traffic congestion; it doesn’t have a city government that is focused on trying to put as much density and commercial development at the expense of damaging the quality of life.”

So, one important facet in maintaining that quality of life in Holladay is protecting the area’s natural environment with green programs and initiatives. “We live in a desert; we only get about 15 inches of rain per year,” says Allred. “We want to keep as much water going back into the ground and into our aquifers because we’re a thirsty community. So, we have an innovative ordinance that requires property owners to not pave too much of their property. That way, water goes back into the ground.”

Holladay is also a Tree City USA. “We have a lot of tree canopy,” Allred continues. “And of particular interest to our residents is the maintenance of our tree canopy, because, again, being in a desert, it’s very important that we don’t lose trees if we don’t have to. So, we’re working on a tree protection ordinance that could potentially extend our purview over tree canopy lots into the private property realm, whereas, right now, we only regulate trees in the public right-of-way, or on commercial properties. Another thing that we do is we have a stream protection ordinance, which means if anybody builds within a hundred feet of our main creek that goes through the city, we require them to go through a review process with the Planning Commission to make sure they don’t negatively impact the stream.”

In addition to protecting the city’s natural resources, Holladay is aggressively pursuing active transportation facilities for the benefit of its residents. “We have built quite a number of bike lanes, recently,” says Allred, “and we’ve added another bike route that just got completed and we’re studying the possibility of yet another. We’re part of a regional network that is eligible for Salt Lake County funding to conduct bike feasibility studies and construct new bike routes. It’s a cooperative effort among all the local governments. We’re working on interconnectivity issues with our neighbor to the west and to our neighbors to the north.”

“We also have a really good parks and trails system,” he adds. “We have just been awarded $2.7 million dollars for the construction of a new park, Knudsen Park, in the south end of our city that will act as a hub for biking, walking, and jogging and will connect to other trail systems. And we have long range plans to work with the owner of our largest irrigation canals to allow walking paths along them to loop to our greenspace hubs and commercial districts.” Holladay has also been busy transforming the former school grounds of Holladay Elementary School – now home to City Hall and the community’s civic center – into a multi-use park. City Hall Park features a new, extremely popular playground, redesigned sports playing fields, arts and cultural performance space, and rebuilt, historic stone bleachers. Other activity centers are planned throughout the Park.

Regarding the Holladay’s revenue stream, one major challenge for its leaders is trying to grow its commercial tax base in a city that is landlocked, almost fully built-out, and has long-established rights-of-way. “Our borders are finite; we’re hemmed in by the Wasatch Mountains to the east and other communities that are also somewhat built-out to our north, south, and west,” says Allred. “And we don’t have greenfields. So, from a land-use perspective, without raw land, it’s very hard for a city like ours to keep our tax base growing.” “We don’t have any manufacturing or industrial park opportunities or zoning,” Dahle adds. “We have very limited office opportunities. We don’t have a huge opportunity to seek out businesses to locate here because we just don’t have the raw land or variety of zones available.”

One particular situation that has helped limit commercial development in Holladay has been the inability of the city and the owner of the defunct Cottonwood Mall on the west side of town to agree on how the now vacant, 57-acre site should be utilized. The Cottonwood Mall was originally constructed in the 1960s and was Utah’s first enclosed shopping mall. It closed in 2007. “The Cottonwood Mall project, which has been stalled for eight years, has been quite difficult for us. We don’t have a shared vision at this point in time,” says Allred. “We think it’s probably going to end up being much more residential than originally anticipated with a smaller commercial footprint,” Dahle explains. (In late 2016, the largest homebuilder in Utah, Ivory Homes, entered into an agreement with the owner of the site to purchase the land upon entitlement approval from the City. Initial rough plans indicate a greater residential presence than the original master plan for the site, but, also with a viable commercial component.)

“The stalled development on the old Mall site hampers the city’s ability to grow its tax base, so while we’re currently unable to develop that site, we do have a 50-acre area of our traditional downtown that is now redeveloping,” Allred says. “And that is why development in the traditional downtown area, or ‘Village Center,’ is so critical to our economic vitality.” Dahle says that the Village Center is envisioned as the core of the city, to be used as both as a small commercial business center, as well as a gathering place for the community.

“There are two or three things that we’re doing, downtown, that are quite innovative,” Allred adds. “We have rerouted some streets, buried power lines, and created a central plaza with some charming architecture to try and enhance a sense of place. In our main downtown intersection, we’ve replaced much older, dilapidated buildings with several newer ones. And, we have recently approved two new buildings on the same site, across from the city plaza, that will host a ‘signature,’ Utah-based grocery store and a new, two story commercial mixed-use building.  Immediately to the east of these two buildings will be a three-story, thirty-nine dwelling development, adding a much needed residential component to the Village district, which envisions a healthy mix of both commercial and residential uses.”

Not only are Holladay’s few commercial areas – with the exception of the former Mall parcel – completely built-out, but its residential development is largely restricted to infill, or teardown and rebuild, construction. “We look at balancing what is available to us against the mission of trying to create a great place for people to live,” says Dahle.

One aspect of enhancing that great place has been the creation of the SoHo Mobile Food Truck Park. The park is the creation of Mark and Shelly Olsen, a Holladay couple, who worked with the City Council to get approval for a permanent venue for food trucks, then purchased land from the City in the Village area, and began to develop it. SoHo is set up with electricity and has six stalls for food trucks to park in with seating available for 100 people. “It’s one of the few, stationary, mobile food truck parks, anywhere,” Allred claims. “And it’s been a runaway success. People come from all over to eat at this park. It’s one place where Holladay has been kind of a leader. More and more cities in Utah are coming to visit us to see what it is that we’re doing that is so popular and attractive.”

While carefully moving forward in the places where it can gain traction, Holladay is betting on creativity and innovation to expand its infrastructure and amenities while making sure that it retains the characteristics of the city that its residents demand. “And, so far, we’re walking a tightrope on making sure that we don’t do things that make people disappointed in the new Holladay,” Allred says.

WHO: Holladay, Utah
WHAT: A city of 31,000
WHERE: Southeast of Salt Lake City, and west of the Wasatch Mountains
WEBSITE: www.cityofholladay.com

iWorQ Systems Inc. – Established in 2001, iWorQ Systems empowers local government – regardless of size – by providing the best tools in management solutions. iWorQ is the first company to offer Software as a Service (SaaS) management applications to cities, towns, counties, and other entities. The company provides hundreds of government agencies access to robust municipal management software at the most competitive rates on the market today. – www.iworq.com 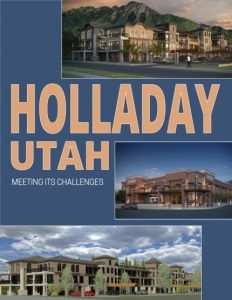