Goderich Ontario – The Salt of the Earth 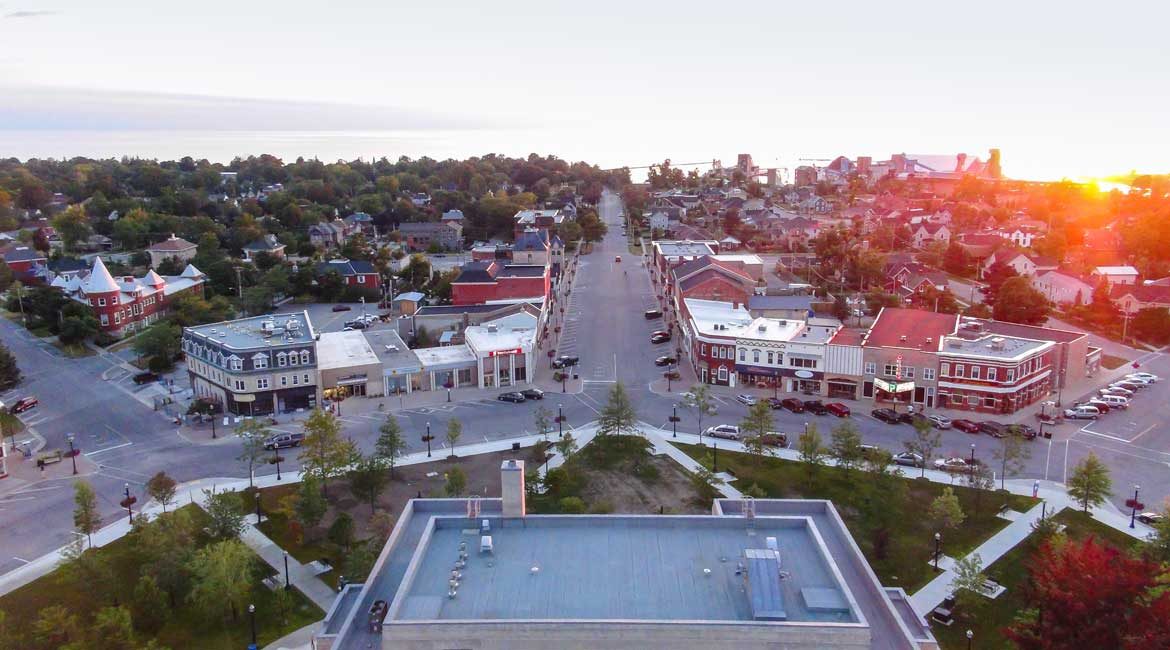 Known as “The Prettiest Town in Canada,” Goderich, Ontario, is located on the eastern shore of Lake Huron at the mouth of the Maitland River. It was founded as a port town by William “Tiger” Dunlop, a Canadian army officer, surgeon, author, and politician, in 1827, and named after Frederick John Robinson, 1st Viscount Goderich, who was Britain’s Prime Minister at the time. The town was officially incorporated in 1850.

Today, Goderich is the largest port on the east side of the Lake, servicing approximately 250 vessels a year that mostly carry rock salt from the Sifto Salt Mine, the largest operating salt mine in the world, to destinations west in Michigan, south in Ohio, and north to parts of Ontario. Salt was first discovered in Goderich in 1866 by Sam Platt, the owner of a flour mill, who originally had set out to discover oil. Platt’s find, the first recorded salt bed in North America, set off a regional salt rush. By late 1867, twelve independent salt wells dotted the Maitland River Valley across Goderich Harbor and Lake Huron.

In 1959, Sifto Canada constructed its first mine shaft, some 1,800 feet beneath the surface of the earth, with tunnels extending over four miles under Lake Huron. A second shaft became operational in 1968 and a third shaft was added in 1983. Each year, some 600 workers extract approximately 7.5 million metric tons of food-grade salt from the mine, used for table salt, animal licks, water softeners, and swimming pool sanitizers, as well as deicing salt which is bagged and sold to help make North America’s winter roads safer. The company pays the province about $16,000 a year, plus royalties, for a mineral lease that expires in 2022. Parent company, Compass Minerals, a public firm based in Kansas, USA, predicts another 120 years of salt mining in Goderich.

In 1999, the Town bought the port from the federal government under a divestiture program, and began a $29 million infrastructure project to rebuild its break walls, river wall, and piers. That project was completed in 2015 and according to Larry McCabe, Goderich’s Chief Administrative Officer, was accomplished without the use of tax dollars. “The user fees were lowered during this process once the town bought the port, but there were still sufficient dockage and wharfage fees, each year, to product a $29 million infrastructure program.”

“We are now proceeding with a $16 million infilling program which will be completed in 2018,” McCabe adds. “That will create about four or five acres of new land and we hope to build on that in the future. There are no tax dollars in that, either; it’s user fees from Compass Minerals and Parrish & Heimbecker (a Canadian grain company) and some other users in the port. That’s the biggest infrastructure program over the last number of years and going on till the next two or three years.”

Chip Wilson is Goderich’s Director of Operations. He outlines some other recent and ongoing infrastructure projects in town: “We just opened up another phase of our industrial land, which now has created approximately 26 more acres,” he reports. “The town put in our own stormwater management because we’ve always found that if you don’t get those plans developed, you’re missing out on a potential opportunity. Developers coming in don’t want to see just open fields; they want to see something that has infrastructure.”

Another project, just underway, is the potential of approximately 300 new homes that can be built on 200 acres of land that was recently boundary-adjusted into the town. “The developer, Fusion Homes, is currently going through the design phases with our engineer and their engineer to get all the infrastructure ready, and they want to proceed in the near future,” says Wilson. “Also, the town just went through a waterfront master plan and over the next two to three years, we’re going to be implementing some of the ideas that came out of public workshops, for re-doing our waterfront. So those are a couple of major projects.”

Meanwhile, McCabe adds that the town has been busy with other projects, as well. “We built a $19 million recreation facility and opened it in 2004, and we turned its operation over to the Sarnia-Lambton YMCA,” he says. “At the same time, we doubled the size of our Carnegie Library for $2 million, and on the heels of that we built a $5 million medical clinic. We have all the doctors in town under leases – some 12 or 13 doctors and more that we’re working on. And we’re getting ready now to move into a $1.7 million addition to that facility.”

There has also been considerable rebuilding of properties that were leveled or damaged by the F3 tornado that ripped through Goderich on August 21, 2011. “It did between $200 and $250 million worth of damage,” McCabe says, “both in the residential area and the commercial area. So we’ve gone through a build-up of properties that were destroyed.”

Another exciting project in Goderich is being developed by a company called NRStor in association with Compass Minerals, owner of the Sifto Salt Mine, that will incorporate Compressed Air Energy Storage (CAES) technology. In a CAES plant, ambient air is compressed and stored under pressure in an underground cavern. When electricity is required, the pressurized air is heated and expanded in an expansion turbine that drives a generator for power production. NRStor is working with technology suppliers that have invented a CAES technology that can capture the heat that is generated when the air is initially compressed, thus eliminating the need for any additional fuel to heat it on the back end. This process allows for a highly efficient system that requires no natural gas and produces zero carbon emissions. “They’ve entered into an agreement to store compressed air in the salt cairns, which are now empty,” McCabe explains. “They’ve been identified as some of the best cairns in the world to store compressed air. You bring the compressed air out and you create electricity. That project is just in its pilot phase; they’ve been working on it for two years through the Independent Electricity System Operator (a Crown corporation responsible for operating the electricity market and directing the operation of the bulk electrical system in the province of Ontario) and they are moving forward with that very exciting project.”

While the port and port area businesses are the town’s largest economic drivers, James Cox, the town’s Economic Development Director and Tourism Coordinator, insists that Goderich actually has a fairly diverse economy. “We have a robust, small-scale manufacturing sector and a number of small-scale employers in our industrial area,” he says. “We also have a very strong tourist economy, here. Being on the Lake and having a unique sense of place – the waterfront, the unique design of downtown, the strong commercial residents we have in the downtown – all of that combine to make it so.”

“We also have a very strong healthcare sector as well,” he adds. “We have a full-service hospital in the community and a number of associated assets. Our healthcare presence has been important for our sustainability as a community, especially when we want to attract residents to town. One of the biggest challengers for our employers, like the salt mine, is finding skilled labor. So they need to attract people from other regions. And if you attract those people, and you want to retain them in town, you need to have doctors, you need to have recreational facilities, you need to have parks, you need for them to feel that this a good place to raise a family. So, it’s really a complete community that we’ve got here; a great community to live and work.”

McCabe agrees: “It’s a well-balanced municipality from the position of economics and from tourism,” he states. “We’re ideally located, two and a half hours west of Toronto; two and a half hours north of Detroit; and an hour and half from Port Huron. We’re far enough from some of the major centers that we’re a regional shopping area. We have all the major chains and a strong downtown core. The core area is a circle with a park in the center. Businesses front the circle and go down the eight radiating streets to form a square. So it’s unique; there are only two or three in North America. Planners view the design of our core area and the layout as one of the best from a planning point of view. Goderich is a unique, historic municipality with considerable charm and some of the best sunsets in the world.”

And it’s also “The Prettiest Town in Canada.”

WHO: Goderich, Ontario
WHAT: A town of 8,000
WHERE: On the eastern shore of Lake Huron, at the mouth of the Maitland River
WEBSITE: www.goderich.ca

Town of Payson, Arizona – The secret... 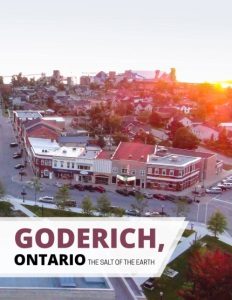