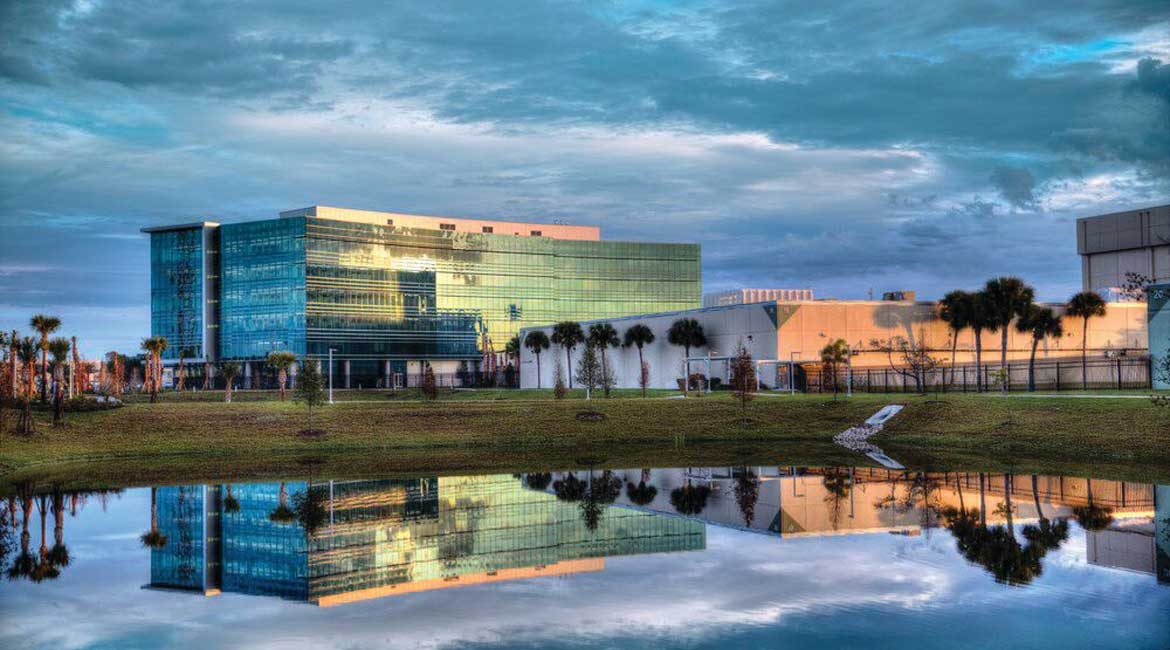 The City of Palm Bay is no stranger to reinvention. The history of the Florida city is varied and vibrant, rooted in the lore of Native Florida and representing the cutting edge of engineering and technology today. It is the spirit of the city and residents that has allowed Palm Bay to adapt to the times and thrive, becoming Brevard’s largest community.

Palm Bay’s early inhabitants are thought to have been the Timucua Indians, who were originally attracted to the freshwater springs, fish, oysters, and wildlife at the mouth of Turkey Creek at the Indian River. In the 1850s the area, then known as Tillman, was host to European settlers who built homes along Turkey Creek and founded a lumbering operation and orange groves. Between 1910 and 1914, Tillman became the center of a land company known as the Indian River Catholic Colony. The colony’s zealous farmers attempted to grow two crops a season, which quickly depleted the soil quality and the colony ultimately failed.

In the 1920s the city was renamed Palm Bay, calling to mind the beautiful sable palm-lined bay anchoring the city’s east side at the mouth of Turkey Creek. A group of Tillman businessmen established the Melbourne-Tillman Drainage District, and issued $1.5 million worth of bonds. Starting in 1922, a 180-mile grid comprised of 80 canals was dug to drain 40,000 acres of swampy land west of Palm Bay. The canals made it possible to control flooding and turn marsh lands to agricultural use. The area’s main industry was rooted in citrus groves which shipped winter produce via the Florida East Coast Railroad to northern markets. Farmers also sold timber and land to paper companies. The economic success of the early 1920s was cut short when a fire broke out amongst the dredges and a severe hurricane hit Palm Bay. By 1926, the previously flourishing Melbourne-Tillman Drainage District was bankrupt.

Palm Bay’s modern resurgence can be traced back to 1959, when the Mackle brothers of Miami purchased land for a local residential project. Although the project had its share of stops and starts, it served as a catalyst for the growth of industry and population in the area, leading to the incorporation of the City of Palm Bay in 1960. On the heels of the incorporation, the city’s industrial base began to grow. One of the city’s first major industrial corporations, Radiation Inc., later evolved into the Harris Corporation, which still serves as the city’s major employer today. The 1970’s saw increasing construction and expansion in the city and as a result Palm Bay experienced enormous growth in the ensuing two decades.

For three consecutive years between 2003 and 2005, the City of Palm Bay was a finalist for the All-America City Award. Growth was steady and the future looked bright for Palm Bay. Like so many other American cities, the housing crisis of 2008 dealt a blow to Palm Bay’s economy. “The two main drivers of the economy were the Kennedy Space Center’s shuttle program and construction,” says Andy Anderson, Palm Bay’s Director of Economic Development and External Affairs. “We were hit pretty hard during the Recession. The shuttle program went out of business at the same time as the housing bubble hit, so we had a double whammy and we were hurting. Up until the bubble hit, our economy was a successful residential development-based economy and the city had set aside very little in the way of commercial property. It is very difficult to sustain a city on residential taxes, alone.” That was particularly true in Palm Bay, which experienced one of the state’s highest foreclosure rates.

“About two years ago, there was a change in leadership, with a new City Council and a new City Manager,” says Anderson. “They brought me in along with other growth and development specialists to help repair the damage.” The team Anderson referred to is Bayfront Community Redevelopment Agency Administrator, James Marshal and Stuart Buchanan, Palm Bay’s Director of Growth Management. “We went to work right away, changing ordinances, getting some of our properties re-zoned and adjusted to make it easier to increase our commercial base. With those changes, we now have some very large projects in the works,” Anderson explains.

“We have increased our percentage of commercial building permits,” says Buchanan, picking up where Anderson left off. “Last year, we issued $155 million in building permits – about 18 percent of those permits were commercial. This year, we’re on track to issue $185 million worth of building permits with about 30 percent commercial. We have a number of regional builders that are either building here or looking to purchase subdivisions to build here.”

“The new builders are primarily focused on two areas of the city,” Anderson adds. “Our biggest area of interest is in the southern part of the city where a brand new interchange on I-95 is being built. That interchange will be located at the segment of I-95 that has the longest stretch without an interchange on the entire east coast route. The project will be a collaboration between the State, the City, and developers. The Florida Department of Transportation is building the interchange and the city is building the connector road. Once the infrastructure is in place, developers will step in to build new subdivisions and all new commercial properties. Another area developers are focusing on is on the west side of the city where we have the St. John’s Heritage Parkway, a new road between Palm Bay and Melbourne. Lennar is going to build that area out. Between those two projects, that’s an additional 1.6 million square feet of commercial space.”

“We’re a large city. We encompass 110 square miles and only about 35 percent of it is developed out,” Anderson continues. “Before the Recession, it was developing quickly to the west. The old, original part of Palm Bay, which was built in the ‘50s, was really suffering. One of our major corporations, Harris Corporation, expanded in 2007 and added a huge, high-tech research and development center in the old part of Palm Bay, which was a huge step in the right direction. Moving forward, the biggest problem that we’re going to run into now that we’ve solved the employment issues in this area is workforce retention and recruitment. It’s a younger work force that desires more lifestyle options and amenities. The work being carried out in our Bayfront Redevelopment District is aimed to target those issues. Developing the Bayfront and connecting that area to Harris is critical to adapting Palm Bay to suit the needs of our young, upcoming workforce.”

“Harris has about 3,500 high-paying tech jobs in a brand new building that does nearly a billion dollars a year in research and development projects,” says Marshal. “So, if you’re going to build out amenities for a targeted workforce, you have to first find out what that workforce wants. With that goal in mind, we set up interviews and surveys with Harris Corporation and their employees and we found out the type of features their workforce is looking for. Millennials represent about 22 percent of their workforce, today, and in ten years, it will be 75 percent. When we reviewed the data, we found that they wanted a more modern ‘vibe’. They want a downtown, so we are working to create this urban ‘burb’ near their campus. It really gets down to a ‘live here, play here, work here’ environment that’s walkable and vibrant. All the numbers and concepts look great and we are really excited about the project.

“All of these efforts are about being able to entice a young and in-demand workforce to come here. We want Palm Bay to be their home. If we can accomplish that goal, we will help our local high-tech employers to be to become more competitive in a global economy by lowering their acquisition costs for talent. It’s going to lower their turnover and their human resources costs, which makes their contracts more competitive. It’s a win-win for our community and our commercial sector.”

“Under Florida statute, we have a tool called a Business Development District,” says Anderson. “It will have defined boundaries in the east side of Palm Bay, including all of our high-tech employers. You can leverage up to two extra mills, on top of what you’re paying, and those two extra mills will stay in the district and pay for things like road reconstruction. As far as the property adjacent to the new boulevard we’re putting in – those are all privately-owned and the investors are ready to go with multi-use buildings along there. So, for the city, the biggest expense is redesigning that one mile. On the other side, the Bayfront Redevelopment District already exists – it’s a Tax Incremental Finance (TIF) entity. They’ve been collecting, for the last ten, fifteen years, the incremental increase in property taxes and putting them into that Bayfront Community Redevelopment Agency for land acquisition and improvements and things such as the boardwalk. So, we have the funding mechanisms set up for those.”

Buchanan estimates that with all the new construction and job offerings, the city’s current population of about 111,000 will grow to 225,000 over the next twenty years. The Growth Management projections show that the city is ready for the influx of new residents. “Palm Bay has an in-house, full utilities department that provides sanitary sewer and potable water,” he states. “We have several million gallons a day of reserve. We have 11 million gallons a day permitted to us, and we currently use seven. So we’ve got plenty of room for expansion.” “And when developers come online, they have to pay impact fees for expansion of the system, so the users of the system, now, don’t have to have their rates increase. The developers pay for the lines that go into their developments,” Anderson explains.

Once again, Palm Bay has lifted itself up, dusted itself off, and re-invented its future. “We’ve learned to diversify,” says Anderson. “We’re not just looking at space programs. We’re not counting on residential development alone. We’ve learned from our mistakes of the past and we’re not putting our eggs in one basket anymore. We’ve had an incredible recovery and we’re open for business. We’re rolling, now.”

WHO: Palm Bay, Florida
WHAT: A city of 111,000
WHERE: In Brevard County, on Florida’s central-eastern coast
WEBSITE: www.palmbayflorida.org 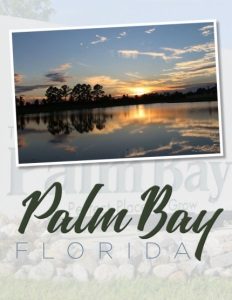