Coldwell Banker D’Ann Harper Realtors is the leading residential real estate brokerage in the South Texas/San Antonio area with nine offices, 430 sales agents, and more than $1 billion in annual sales. “We encompass downtown San Antonio, all the way north, through the hill country of Texas; from San Antonio to the south Austin area on I-35; all the way over to I-10 going west toward El Paso; and all the way into the Bandera area, as well,” says Leesa Harper Rispoli, President of the iconic real estate company that her mother first founded in 1986.

“My mom started the company in 1986 at the dining room table,” Rispoli continues. “In 1989, she purchased all of the Coldwell Banker franchises in San Antonio, Texas. She has always been the sole broker and sole owner of the company until about 15 years ago, when I came into the company. She gave me a portion of the company and we continue to own it, together. And we have grown it to what it is today, with a lot of sweat and tears.”

Rispoli reports that she had worked for 16 years in the public school system as a teacher and administrator, before her mother called her and offered her a position with her real estate company. “When I came here, I was not in executive management,” she recounts. “I was back in property management, learning that division.” San Antonio, she explains, has a high number of homeowners who are in the military and want to keep their homes while on deployment, but don’t necessarily want to manage them. “We secure tenants and manage that home for the homeowners until they come back and sell it or live in it again. When I started, we had 400 properties; when I left property management, we had 1,200 properties. Right now we manage about 1,300 homes. I was there for six or seven years before I did anything else for the company.”

Clearly, Rispoli’s mother, D’Ann, believed that her daughter had to work her way up, and was not, in any way, entitled to an executive position, much less company ownership, without displaying the appropriate due diligence. And Rispoli has adopted that same attitude toward her own progeny. “I have two beautiful daughters,” she states. “Our oldest daughter works in the title industry and our younger daughter is a credit analyst in a bank. I had a career before coming to work for my mom, and it’s my philosophy that my children need to have successful careers elsewhere, prior to joining a family business. Is it my dream that our girls will come in and help run this one day? Sure. But they need to earn it.”

Another operating principle of the company is its insistence that its agents focus only on their area of specialization, while leaving the operation of its other divisions to the experts in those areas. “We do not allow our agents to practice property management,” says Rispoli. “We have 24 employees that just work in that division. We want our agents producing via listings and sales; we don’t want them to dabble in property management, dabble in commercial. There are a lot of companies out there that allow their agents to do property management. We pick up those homeowners all the time, because they just don’t know what they’re doing.”

In addition to its property management division, D’Ann Harper Realtors specializes in farm and ranch properties, residential sales, and relocation services. Its newest division is called Coldwell Banker Global Luxury. “Coldwell Banker has had for many years, what was called ‘Previews,’” Rispoli explains. “It was a marketing division for the upper luxury homes. About a year ago, they rebranded it and now it is called ‘Global Luxury’ and it is an international franchise. Coldwell Banker is only going to be awarding 33 offices in the United States, and we have one of the 33. That has become an absolute game changer in my market. This time, last year, we had 20 listings that were in the luxury market, which in the City of San Antonio, is 500K, on up. Now, today, we have 72 homes listed in the Global Luxury program.”

While D’Ann Harper Realtors may have begun on a dining room table, the company has always been technology-driven. “It’s technology and innovation that drives a company into the future,” Rispoli maintains. Over the years, it has implemented numerous advancements in sales agent and employee workflow, including the construction of innovative CRM tools, custom web portals and virtual servers, public websites, and advanced networking that connects all the offices across San Antonio and surrounding areas. Thus, all sales agents have access to 24/7 technical support, and the tools needed to carry them ahead of others in the marketplace. The company reaches out to its extensive customer base through a monthly real estate guide and a weekly, 30-minute TV program.

Most key, however, to D’Ann Harper’s success over the years has been its strong company culture, first created by a woman who, for years, according to Rispoli, was “well-respected and recognized for her endeavors in the real estate industry. My mom has won every single award imaginable here in the City of San Antonio and she has won national awards,” she says, proudly. “What separates us from our competitors is we have the legacy of being a standup company, known for always doing the right thing. We do business one way, and that’s the right way. If a person operates a business on the fringes of ethics, they’re not going to be a partner with us for long. I never want to lose sight that it’s about ethics and hard work.”

“Culture is very important to our company and maintaining the culture that we have built is so very, very important,” Rispoli adds, in summation. “I feel so privileged to be given the opportunity to lead a company that has such a solid foundation that has been built over 35 years, and to be the steward of an iconic and reputable company that embraces the future.”

Check out this handpicked feature on McGuyer Homebuilders Inc. – The mark of integrity.

WHAT: An iconic realty company 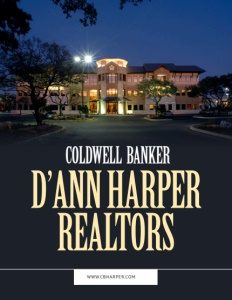