The Murfreesboro Municipal Airport is a city-owned, public-use airport located two nautical miles north of the central business district of Murfreesboro, a city in Rutherford County, Tennessee. “The original airport here in Murfreesboro was located at Middle Tennessee State College,” says Airport Manager, Chad L. Gehrke. “The University started an aviation program back in the period of World War II, training cadets. In 1948, the City of Murfreesboro started construction of an airport north of Murfreesboro, and it’s been here, at its current location, since 1952.”

Today, the Middle Tennessee State University Aerospace Department, which has one of the largest university Air Traffic Collegiate Training Initiative (AT-CTI) programs in the country, continues to maintain a substantial presence at Murfreesboro Municipal Airport, training professional pilots, aircraft mechanics, air traffic controllers, and airport administrators. The university maintains a fleet of aircraft including 19 Diamond DA40s, a Diamond DA20, three Piper PA-28R Arrows, two Piper PA-44 Seminoles, a Piper PA-18 Super Cub, and a Beechcraft King Air 200, and has continued to maintain its ranking as one of the top five aviation programs in the nation.

The City of Murfreesboro, took over the direct operations of the Airport in 1994, hiring an Airport Manager and airport staff to fuel aircraft, maintain the airport, and oversee improvement projects. The City manages the Airport under the direction of the Airport Commission, a seven-member advisory board. The Murfreesboro Municipal Airport is one of a very few general aviation airports in the State of Tennessee that does not receive tax payer money. “We’re completely self-sufficient through fuel sales, hangar rents, and land leases. Those revenue sources make up our operational budget,” Gehrke states. “The City has assisted the Airport with large capital improvement projects through the use of bonds that the Airport pays back to the City typically on a 20 to 30 year term. 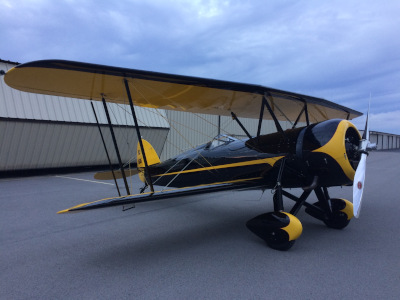 According to Gehrke, about 140 GA aircraft are based at the Murfreesboro Municipal Airport, with a waiting list of about two dozen more. “We are in the process of developing an area just north end of the airfield that was previously used by our Parks and Recreation Department,” he reports. “That land was deeded to the Airport a few years ago, and since we have the demand, we’re starting to build in that area now. We have enough available land to pretty much double our T-hangar space with those 25 acres.”

Gehrke adds that, in past years, State grants have underwritten the majority of the Murfreesboro Municipal Airport’s construction costs, but that a new economic paradigm may be in order, going forward. “The State of Tennessee is a block grant state and we’ve generally had a sufficient amount of funding through the state to build hangars and ramps and other infrastructure,” he explains. “Funding levels have dramatically changed within the last five years, so we see where the City may still  continue to undertake some T-hangar construction projects, but a majority of these hangar projects – box hangars and such – may be conducted through private/public, land-lease type of arrangements. Managing the projects and the local, state, and federal funding sources has become a new challenge for the GA airports here in Tennessee.”

Meanwhile, over the last few years, the Airport has experienced some significant upgrades that have made it more attractive to corporate customers. “In 2015, after many years of planning we were finally able to extend our runway,” Gehrke exclaims. “It was previously 3,898 feet, and we were able to extend it to 4,750. Just this spring, we were finally able to get the FAA blessing on the new approaches for the extended runway, so we’re now just starting to see some of that corporate traffic that was not previously able to operate at Murfreesboro. With those improvements in place, the Airport has its first land lease agreement in the last decade or so with a corporate customer.  They’re building a hangar, right now, to facilitate their corporate jet and provide facilities for Air Methods and Vanderbilt Life Flight. This facility will be a tremendous economic asset to our airport and community.

“Another improvement that is in the planning stages is a new terminal building,” Gehrke continues. “The building that we’re currently in is about 4,000 square feet, and was built during the construction of the airport in 1952. It’s a unique building but it no longer reflects our community and its dynamics. We cannot provide the services and space our pilots and their passengers are accustomed to and require. So, the new building will be in the 10 to 12 thousand-square-foot range, and we should begin construction next spring or summer.” 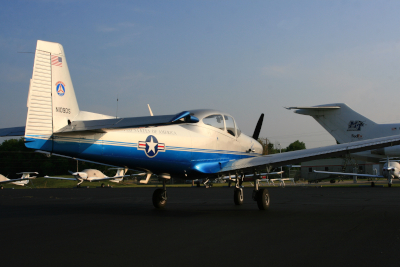 Also on the to-do list is improving the area around the new terminal, and making more room available for some of the Airport’s long-time tenants. “There is an older, Quonset-hut type hangar that has surpassed its useful life many years ago. We want to remove it and open up some much needed ramp space and build a new, larger, four-bay hangar with office space. That will allow for much more efficient operations and give this whole terminal area a fresh, new, appealing look, better representing our community to whomever passes through,” Gehrke says. “We also want to increase the number of available hangar facilities for some of our businesses on the field. Besides the university having a large presence here, there are other businesses that have done very well over the last five or ten years. Murfreesboro Aviation is our one of our FBOs that provides flight training, maintenance, and charter service and they’re growing tremendously. Mike Jones Aircraft Sales is known internationally for its work on the Piper Navajo Aircraft and their avionics work. They’re selling aircraft to customers in Europe, South America, and across the United States, and they need to expand. Both of those businesses provide several high-tech jobs and the Airport needs to continue to create space and opportunities for the expansion of their businesses.”

Serving its current tenants and customers is important to Gehrke. “We are a Shell Aviation branded dealer,” he says, “and we recently updated our contract with Eastern Aviation Fuels, which provided us with aircraft refueling trucks, allowing us to offer aircraft fueling services to our customers at their hangars. Before, our fueling services were all provided through fuel islands. The fuel trucks add a new level of service to our hangar customers while continuing to offer discounted self-serve fuel at the fuel island for the customers who do not require or desire the additional level of service. Continuing to provide self-serve fueling service is important and has figured into our plans for our future renovations, and upgrading of our fuel farm ensures that we continue to meet the demands and expectations of our customers.”

While some regional airports in the U.S. compete with nearby facilities, Gehrke doesn’t see Murfreesboro in competition for either business or base customers. “There are two airports in Rutherford County,” he explains. “The Smyrna Airport, which was previously Sewart Air Force Base, has tremendous facilities capable of handling the largest commercial aircraft with a vast amount of available land for aviation and non-aviation related industry development. The majority of the operations at the Murfreesboro Municipal Airport are generated from Middle Tennessee State University and Murfreesboro Aviation flight training.  Flight training has been, is, and will continue to be the Murfreesboro Airport’s top activity and contribution to the community and industry. With the Smyrna Airport and the Murfreesboro Airport understanding each other’s strengths and missions, we work very well together to serve our community effectively and efficiently.”

And when it comes to Murfreesboro Airport’s mission, Gehrke maintains that aeronautical training is key. “Even though it’s a small airport, I definitely see Murfreesboro being an important part of this industry,” he says, in conclusion, “especially with the university here. When we talk about providing pilots for our military, our airlines, and corporate flight services across the county; when we talk about the need for aircraft mechanics, air traffic controllers, and other professionals in this industry- here at Murfreesboro you see a lot of young people excited about aviation and wanting to be a part of it, starting their careers here. Generating that level of excitement and opportunities for our community and the next generation of aviation professionals is what the Murfreesboro Airport is all about.”

Check out this handpicked feature on Rock Hill-York County Airport – A community resource.

WHO: The Murfreesboro Municipal Airport

Murfreesboro Aviation has over 75 years of combined aircraft sales experience.  We own aircraft ourselves and understand the needs of both the seller and the buyer (we’ve been both).  Our team has sold and delivered aircraft in nearly 20 countries.  Please call us!  We love talking about airplanes! 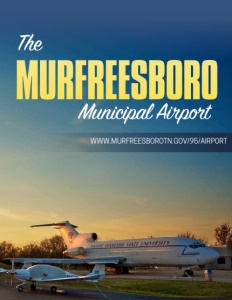