North Lauderdale, Florida – A Fun City in the Heart of Broward

A Fun City in the Heart of Broward

Business View Magazine interviews representatives of North Lauderdale, FL, as part of our focus on best practices of American towns and cities.

For a southeast Florida city that wasn’t established until 1963, North Lauderdale has been making great strides – actively spreading its roots and laying the foundation for a bright future. More than 47,000 people now call this thriving suburb of Fort Lauderdale “home.” A unique city where they can enjoy a fun, urban/suburban lifestyle in the heart of Broward County. At only five square miles in size, North Lauderdale continues to grow its population in tandem with the County, welcoming new residents from Europe, the Caribbean, South America, and across the U.S.

With that growth comes challenges, but the city of North Lauderdale’s innovative approach to development has been working like a charm. Tammy Reed-Holguin, Director of Community Development, explains, “Our city is predominately built-out, however, that gives us a lot of opportunities for redevelopment and attracting new residents to our city and addressing their needs. Recently, we’ve seen the reuse or demolition of existing commercial buildings to build something new.”

Referencing the repurposing of an early 1990’s era Walmart store and an adjacent strip shopping center, as a prime example, Reed-Holguin recounts, “Walmart decided they wanted to build a new Superstore, and they purchased an old strawberry field in our city and built the store there – leaving the existing Walmart vacant. As a result, the strip shopping center which had a different owner started to lose tenants. That’s when an investor came in and purchased both the old Walmart building and the strip shopping center and put in a Ross Dress for Less, several other clothing stores, a Youfit Health Club, and now they’re expanding the strip shopping side to add restaurants to that end of it. So we’re very excited about possibilities like that for redevelopment.”

In the vicinity of the new Walmart, the same developer purchased some outparcels of land and built a strip center that brought in three restaurants and some retailers. That was a big boost for North Lauderdale, as it was lacking sit-down style family restaurants, and expressed that need to developers who were interested in the city. Another example of a commercial building being torn down and replaced by a new build involves a Walgreens store that did not renew their lease. The property owner identified a Wawa store to come in and take the place of Walgreens. That is now being built and will be the first Wawa in North Lauderdale. Mike Sargis, Assistant City Manager/Parks & Rec Director, exclaims, “You know you’ve made it when you have a Wawa in your city!”

By spurring redevelopment of commercial entities, North Lauderdale has also encouraged housing starts for the expanding population. Reed-Holguin reports, “We have some townhomes that have been built on vacant lots, and a couple of new apartment buildings that are mostly full all the time. We think the population is growing and we’re really pushing with this census to get everybody counted. The city has made its own effort to get people to participate. We created Complete Count committees to educate the public so they would know what the census means to the city. And we urged them to go out and tell their friends and neighbors to help everybody get counted. Because we’re really trying to reach the 50,000 resident mark, which is the magic number to become an entitlement city and get funding directly from the federal government. That’s our goal.”

North Lauderdale currently has some significant housing projects on the go, including a townhouse development called The Crossing, which will be a good owner opportunity for residents. In that regard, the city operates a first-time homeowner program, receiving Community Development Block Grant funds from the County to help people with their down payments. The offer applies to anyone who wants to buy in that development. Another townhouse project by Rock Island Land Corp, will be a leasing opportunity. In addition, Lennar is building townhomes at a development called Savannah Landings.

Reed-Holguin notes, “The city prides itself on having affordable housing in Broward County – including two mobile home parks, and apartment building rentals, townhome rentals, duplexes, fourplexes. We have a variety. North Lauderdale is very much a working class community so we have workforce housing for people who want to live here, predominately young families. Our tax base is primarily residential; we don’t have industrial parks with big employers in one place. Our major employers are Teleperformance (a telemarketing firm) and Off Lease Only ( a preowned car dealership), along with the big box stores – Home Depot and Walmart.”

The importance of relationship building cannot be understated. A case in point comes from the utilities sector, with The City of North Lauderdale giving a shout-out to its valuable long-standing relationship with US Water Services Corporation (USWSC), the city’s prime utility contractor since 2006. According to Carl Smith, Vice President, U.S. Water Services Corporation, “USWSC provides all staffing for the operations of the city’s 7.48 MGD lime softening treatment facility, as well as providing all customer service and billing for over 8,400 utility customers. We have enjoyed our relationship with the City of North Lauderdale and their customers and look forward to our future relationship with one of our most valued clients.”

On the sustainability front, the North Lauderdale Community Garden opened in mid-2011 and in the nine years since the start of the project, it has been going strong. According to North Lauderdale Mayor, Ana Ziade, “We have a Community Sustainability Board that our Commission appoints residents to and they’ve been working on a community garden to provide healthy food choices. It was located across from city hall and we’re currently in the process of moving it in front of the dog park. There will also be a playground there, so it will be a multi-use facility.”

Mayor Ziade has lived in North Lauderdale for 30 years and Mike Sargis is also a resident. “We’ve lived here long enough that we know what it once was,” says Ziade, “and as times have changed, the city has evolved. We’re just trying to bring it back, as needs change. It’s not just restaurants, our parks need to expand in certain ways. We have more children per capita than we have adults in our city. With five schools and three charter schools, we have to gear a lot of our programs toward kids. We have phenomenal spring, summer, and winter camps and aftercare programs.”

Obviously, with COVID-19 a lot of those programs have been affected. So Sargis and the Parks Department have created a safe space for kids who possibly don’t have internet, or have parents who may need assistance, to come out and meet in the teen center. Just one of the many things the city is doing to think outside the box for their youth. Working with Scouting groups is another effort, which in turn is geared to help the community. “We’ve got them going out with Code Enforcement and meeting the residents that can’t otherwise take care of their property, so it’s a win/win situation for everybody,” says Ziade. “These are the type of things that I envisioned bringing back into the city, and we have. It’s amazing. I can’t say enough about the way they’re moving forward and being proactive, as opposed to waiting for things to happen.” Sargis adds, “Above all, we are a caring city and a diverse community. We care about all our residents. and we take great effort to make sure everyone feels welcome.” 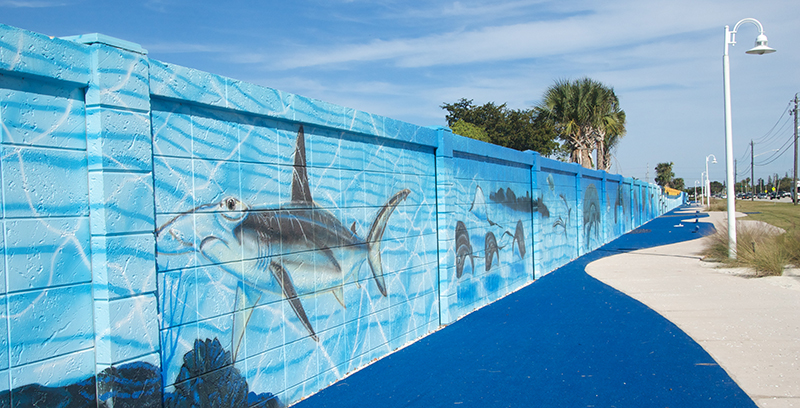 Revitalization has also been addressed through rebranding efforts. Reed-Holguin adds, “The Mayor and Commissioners focused on branding for the city over this past year and the tagline they developed was “A Fun City in the Heart of Broward.” A lot of the same things that Mike just shared are the reasons why they came up with that tagline. Because of our Parks & Rec programs and because of the care and assistance they give to city residents.” All of North Lauderdale’s marketing incorporates that tagline and a new logo – created by a local student. Rather than using a marketing firm, the community had a contest for students to come up with a new logo for the city and it was a high school student that won the contest.

Summing up what makes North Lauderdale such a special place, Mayor Ziade shares, “We’re a city by name but we are a community – a multicultural, all-accepting, and all-loving community. I always end meetings with my own personal tagline, Together, Juntos, Ansanm, which is a way of saying “together” in English, Spanish, and Haitian Creole. These are the predominant languages spoken in our city and it truly represents the makeup of North Lauderdale. We’re all about family and community here, and business is a small part of our city that we’re trying to expand so our families can go beyond where we are now for a great future.”

WHERE: In Broward County in southern Florida

Off Lease Only LLC – www.offleaseonly.com