From Belgium immigrants to Canada’s leading irrigation distributor, Vanden Bussche Irrigation & Equipment Ltd. has a rich history of giving back. Commitments to customers, employees, suppliers, and communities have played a key role in the company’s success since its inception in 1954. Vanden Bussche Irrigation is still headquartered in Norfolk County, in the heart of tobacco country, a high-value crop in southern Ontario. This fourth-generation, family-owned-and-operated business that began in agriculture markets and expanded to a landscape and golf division is proof-positive that nurturing strong roots brings strong results.

Built on the values of exceptional service and expert knowledge, Vanden Bussche Irrigation believes in total customer satisfaction by providing irrigation design, consulting, environmental facts, world-class products, and service excellence. The company is an industry leader with a full range of irrigation applications across agriculture, residential and commercial landscape, and golf markets. No other Canadian distributor offers this wide array of irrigation application products. 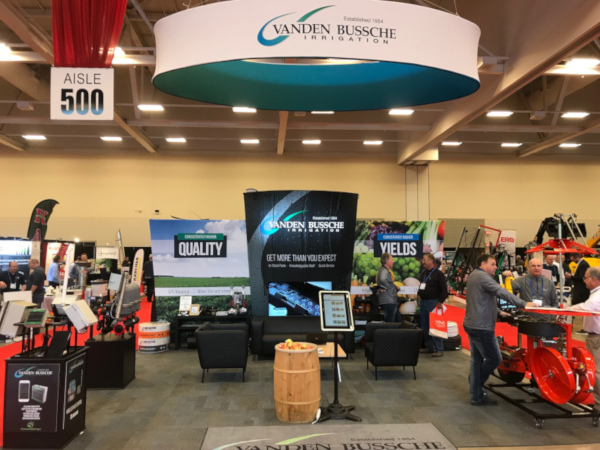 Marc Vanden Bussche, President of Vanden Bussche Irrigation & Equipment Ltd., shares the fascinating backstory of this long-time family business. “It all began with my grandfather, Gerard Vanden Bussche, immigrating to Canada from Belgium in 1926 to work in agriculture. At the early age of 28, he was share-growing his first tobacco crop. In 1930, he bought his first farm; in 1931, he bought two more. And everybody knows in the early ‘30s, it wasn’t good times. He was working hard and continued to work hard, buying, selling, and developing farms – in those days there was a lot of land clearing.

“Then, in 1945, he buys an area of muck land in Grand Bend, Ontario – 1,200 acres that’s a complete mud bog. He offered to give Belgian immigrants a parcel of his land to start their own farm if they would help clear these 1,200 acres. The land they earned would allow them to grow their own crops and support their families, while using Gerard’s equipment to get started. So, they dynamited underground to drain the marshland, turning stumps upside down to get them out of the way. In the end, he developed 800 acres and eventually sold it in parcels. In 1954, when my father, Roger, was 24 and out of university, he and my grandfather started an irrigation company based on the tobacco industry.

“Because there were a limited amount of tobacco farms, you could only sell so many systems to them. And these systems last for decades because of the way they’re manufactured. So, the company diversified in the ‘60s into nursery, and greenhouse, and other crops like vegetables. And while some of our competitors were sticking close to the area, we were spreading out and bringing in product of high-selling value, which was setting us apart. Maybe we didn’t win every deal, but we were having exclusive dealerships and distributorships for certain products and that panned out, because today they’re the only ones in business, due to their engineering and value. In the 1970s, the fuel industry was going crazy and we were bringing into the market diesel engines during the gas crisis, whereas maybe our competitors didn’t have that foresight.

“Unfortunately, in 1979, my father passed away. He was only 49 and left behind my mom, four daughters, and me. I was only 17 and still in school. My mom, Theresa, became President of the company and we had a great General Manager in Brooke Sowden who’d been working with my dad since 1968. Luckily, he got us through the ‘80s. I left school and started here in 1980, so this is my 39th year. He watched me develop, mentored me in all the aspects of the company – through assembly, shipping, service, sales, and eventually into sales management and general management. Today, I’m President and my kids have joined me in the company. My son came on five years ago, my daughter three years ago, and we’re all having lots of fun. They’re enjoying it – we’re here to stay.”

Vanden Bussche Irrigation has 55 full-time employees, that goes to the mid-80s, seasonally, when university students, and sometimes semi-retired workers, are hired to help out. There are six Ontario locations: Milton, Burlington, Concord, Scarborough, Ottawa, and the largest, which is the head office, in Delhi. The majority of business comes from Ontario, some from eastern Canada, as well as international work in eastern Europe. The client base is split about 50/50 between agricultural, and turf and golf. But that varies – the last couple years, it’s been higher on the agricultural side. In Canada, even when the economy fell in 2008, agriculture/farming still carried on quite well.

Marc recalls, “Through the 1980s until 1994 we did a lot of acquisitions; took the opportunities to take over other irrigation companies. We haven’t had those opportunities for the last few years, but it’s the best way to do it. I definitely like sliding in and buying everything from the forklift to the coffee pot, and even taking over the phone number. I see a lot of acquisitions happening in different industries, today, and that seems to be the way to go. We have lots of competitors, but none of them do the full spectrum of irrigation that we do. We would have a competitor that will sell one very large piece of mechanical equipment that we have out front – and we would compete one on one with them. We compete with another one on golf course equipment; another on greenhouse irrigation; another with drip irrigation in the fields. But we sell the whole gamut – we are a one-stop shop for all kinds of irrigation equipment. That is our business and we lead in each of those market segments.”

Recently, what’s come on fast, and changed the agricultural industry in a big way, is hemp production and industrial cannabis. While medical cannabis has been legal in Canada for years, legalization of recreational is less than a year old. “Within the last six months,” Marc reports, “that business has really taken off. On the turf/golf irrigation side, distribution is changing constantly. Where’s there’s growth in it, the companies are getting bigger. It’s the Amazon effect. That sprinkler on your lawn, you can order pretty well anywhere and have it tomorrow. That’s our challenge with distribution. So, for that part of our business we have to go on the value we have, with the knowledge we can offer, to make sure the person is getting the right system installed, whether it’s for a golf course, cemetery, city park, or lawn system. Do-it-yourselfers don’t come here; we work with a contractor base of knowledgeable installers. But it is tough to compete against the market trendsetters that can send the ecommerce pricing out, quite easily. That’s our biggest threat.” Vanden Bussche has its own ecommerce opportunities, including an ordering app that gives pricing quotations, etc. – customers must log in under their company name, not just anybody can access it. There is a lot of customer interaction on the company website, as well.

As for long-term relationships that have been valuable to the company’s success, Marc states, “They’ve all been! We’ve been a distributor of Rainbird products for 65 years. They’re still a family-owned company – the LaFetra family – and they’re our largest vendor. We also deal a lot with Netafim, an Israeli-based manufacturer that invented drip irrigation in the 1960s. The technology they brought to agriculture with micro-irrigation has saved the world a lot of water. Another important one we started with is an Austrian company called Baeur – it’s more agricultural, high volume, super strong equipment. In fact, it’s made so well that I have too many parts sitting on my shelf and I’m not making any money on service!”

Although Vanden Bussche Irrigation has become a nationally-known industry leader, the commitment to support its Norfolk County roots has never been stronger. And that looks to continue for many years ahead. Marc Vanden Bussche sums it up quite candidly, “Our company is family run, family fun. We believe the customer is always right – and they are. We come from a background of hard workers, we sell value, and we’re fair. We want to see our customers profit; if they profit, we can too. And we’re never afraid to talk about profit because we have to make it on both sides. Five years down the road, I’m not planning on fully retiring. It will be a slow slide. But succession is coming; it’s been planned since even before the kids started working here. And my hope is for it to be a really good succession. They’re teaching me and I’m teaching them.”

Important breakthroughs in slurry handling products, and the development of world- class irrigation machinery, have made BAUER a market leader in the production of high-quality equipment for use in agricultural, municipal, and industrial applications.

Early success with the development of a high-pressure piston pump for handling manure led to the construction of Bauers own pipe production mill, and in 1947, Mr. Bauer developed the Bauer Lever-Closure-Ring and Bauer Quick-Couplings that would become industry standards.

The 1970s saw the introduction of Bauers incredibly successful RAINSTAR “traveling” irrigation machines that continue to provide farmers with a cost effective, mobile, and highly reliable method of irrigating all kinds of crops, even in challenging terrain or irregularly shaped fields.

Today, the Bauer Groups acquisition and integration of highly regarded companies such as FAN Separator and Eckart, allows BAUER to also remain on the cutting-edge of wastewater handling and separation technology.

Whether irrigating a soccer field or acres of vital cropland, separating manure for composting or to produce bedding material for 10,000 cows, Bauer provides customers with a truly complete package and meets the highest expectations for quality and value.

To learn more about Bauer, visit us at www.bauer-at.com