Town of Ingersoll – Our Heritage. Your Future.

he head of engineering services in the town of Ingersoll is, by definition, a very busy person.

The town engineer is charged with a laundry list of tasks that include design/administration of capital projects related to construction or reconstruction of roads, maintenance of the town’s inventory of tangible assets, review of all proposed private development subdivision and site plans, providing location services for storm sewers and monitoring of creek and stream levels to ensure the town’s storm water strategy remains current.

And, as incumbent Sandra Lawson concedes, there’s a never-ending expectation that all of the missions will be accomplished amid funding levels that are always something less than unlimited – especially when compared with far larger municipal neighbours like London and Brantford.

“
We’re probably better than some, but not as good as the bigger cities because we don’t have the economies of scale as the larger urbans or the same tax base to draw upon,” she said. “We have a substantial backlog in building facilities; not so much in roadways. Bridges are another thing we have a backlog on. It seems, in our asset management plan, some of the things we’re looking at the most currently, are bridges and our facilities.” 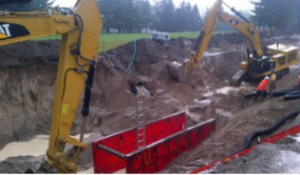 Lawson, who’s been town engineer since March 2013, oversees an operation that has seven people in engineering, 12 more in public works and another two in building. An extra staff member was added to focus on asset management last year, but it doesn’t change the reality, she said, that as long as the town’s boundaries stays near where it’s been for the last decade, her challenges will persist.

Ingersoll’s population as of the last federal census was 12,146 and its town center sits roughly 40 kilometers to the east of London, whose population in 2011 was more than 30 times larger at 366,151.

Any significant land expansions are limited by provincial Highway 401 on the south, and by municipal borders with the townships of Zorra (on the north and west) and South-West Oxford (on the east and south).

Ingersoll’s single largest employment entity is the CAMI Automotive plant – an operation that’s wholly-owned by General Motors of Canada and has a workforce of more than 3,000. The plant opened in 1986 and ownership was shared by Suzuki through 2009, it now manufactures the Chevrolet Equinox and GMC Terrain crossover vehicles, producing approximately 300,000 vehicles per year for the world market.

An additional 100 people were hired by CAMI in August and another 120 hires are planned before year’s end. The town anticipates more companies could be on the way that provides complementary services needed by the plant and its just-in-time assembly/production system.

“We have a lot of people that commute to work in Ingersoll,” Lawson said. “And your tax base can’t survive on residential increases alone; you need a lot of commercial and industrial uses. We have a strong industrial tax base for our population but our further growth is constrained by our boundaries, so our constant challenge is to be able to keep our taxes low with the small number of people we have.”

And because the budget echoes the fact that Ingersoll is no metropolis, fiscal prudence is vital.

Lawson said one way to compensate for perpetual funding challenges is to make sure that when significant projects are being handled, all necessary elements and upgrades are taken care of at the same time; which eliminates having to go back and replace multiple infrastructure elements separately.

For example, when significant road work is under way, the status of underground water, storm and sanitary sewer infrastructure are checked as well. If things need fixing, these items are handled within the scope of the same process.

“We do projects in synergies,” she 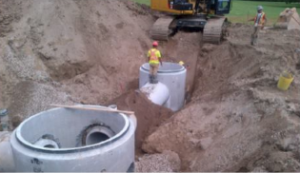 said. “That way, we’re only digging up the road once.”
Recent major projects in the town include $6 million worth of work on Clark Road that stretched over two years and involved a full road reconstruction in addition to new curbs, gutters, sidewalks, storm sewers, water mains and sanitary sewers, along with the town’s first dedicated bicycle lanes.

Additionally, the summer of 2014 saw the addition of a major sanitary sewer trunk line on Holcroft Street – installed about 12 meters deep – that necessitated the use of four backhoes working at the same time, one of which was delivered in pieces and assembled on site.

The Holcroft Street project was worth $2.4 million and included the removal and replacement of 100 trees along the boundary of the adjacent golf course as well as the addition of sidewalks fronting on the residences.  The last two years have also seen a 100 percent conversion to LED street lights at a cost of just more than $2 million, Lawson said, which will yield a full payback to the town, thanks to lower energy and maintenance costs, within seven or eight years.

“It’s really interesting, because when you come along the 401 you can barely see Ingersoll because there’s no light pollution with LED lights,” Lawson said. “You can see the CAMI plant on the horizon and it lights up the whole sky, Ingersoll Town Center is a hidden gem behind the bright lights of CAMI.”

Going forward, Lawson plans to use the same strategic approach to addressing other town needs.

Priority No. 1, she said, is getting sanitary and storm sewers and water service into the southwest area of the town, while No. 1A is addressing a lingering list of work needed on local roads and bridges. All tasks will be taken up under the direction of the newly elected town council that saw three new members elected in late October.

“We are preparing a financial plan that will provide guidance to the new council to be able to tackle both the construction needs of the next five to 10 years as well as attempt to reduce the backlog of infrastructure needs,” Lawson said.

WHO: Town of Ingersoll
WHAT: Oxford County municipality, now home to 12,146 residents, that was initially incorporated as a village in 1852 and became a town in 1861
WHERE: Along the Thames River in southwestern Ontario – about 20 kilometers southwest of Woodstock and 40 kilometers east of London
WEBSITE: www.Ingersoll.ca 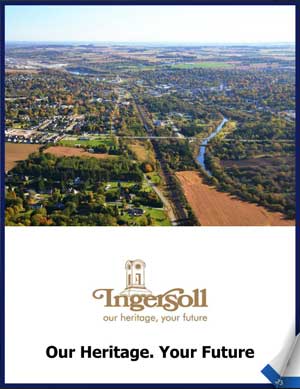