The City of Kissimmee, founded in 1883, is the largest city and the county seat of Osceola County, Florida. A place where history and progress collide, Kissimmee was originally a small trading post on the northern bank of Lake Tohopekaliga known as the community of Allendale. After the Civil War, this area was included in a purchase of four million acres of marshland and plains by Hamilton Disston, the owner of Disston Saw Company in Philadelphia, Pennsylvania.

In January 1881, Disston contracted to drain the area and deepen the Kissimmee River, so products such as cypress lumber and sugar cane could be shipped into the Gulf of Mexico and points beyond. Many steamboat captains navigated the chain of lakes leading from Kissimmee to the Gulf. Disston also opened real estate offices across America and several European countries to advertise and sell off portions of his land, and the population in the area began to expand.

Around 150,000 tourists came to Florida during the winter of 1884. The South Florida Railroad was growing and extended the end of its line from Sanford down to Kissimmee, making the new town on Lake Tohopekaliga a transportation hub for Central Florida. By 1920, Kissimmee’s population increased to more than 2,700 people as a result of the Florida land boom. In the 1930s, the cattle industry began to flourish in the area as well. However, citrus and other crops remained the predominant industry. Also, the Kissimmee Airport construction in the 1940s by the U.S. Army Corps of Engineers in preparation for the U.S. involvement in World War II caused Kissimmee’s population to increase by 38% to 3,700 residents.

City leaders wanted to continue Kissimmee’s prosperous history and encouraged growth by attracting retirees to the area during the 1950s. This effort stimulated growth by nearly 60%. But the modern City of Kissimmee indeed came into its own after Walt Disney bought up thousands of acres of land for his second theme park. The area became home to Walt Disney World, followed by more theme parks, hotels, restaurants, stores, tourist attractions, and many more workers. Since Disney World’s Magic Kingdom debut in October 1971, the City’s community doubled from 7,500 residents to 15,000 by 1980; it doubled again over the next decade to 30,000. By 2008, Kissimmee’s population reached 57,000, and times were good for the entire Central Florida region. But the Great Recession, which began in 2008, devastated the local economy, built on the tourism that supported so many jobs. 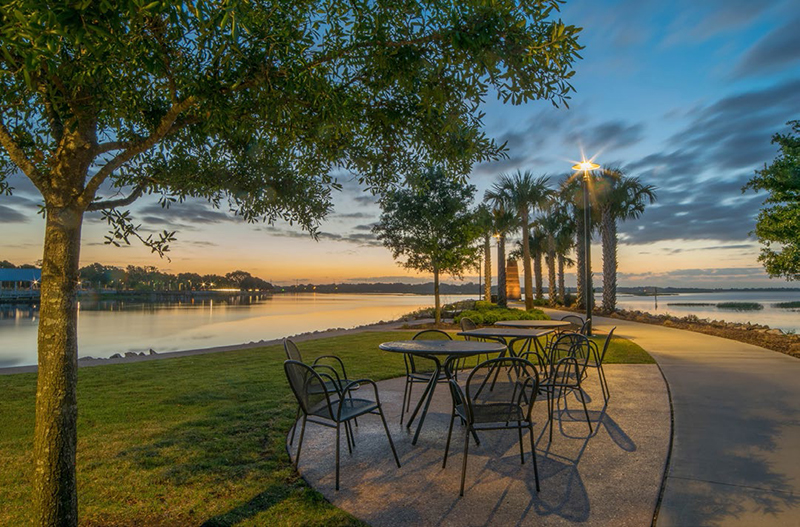 “The City of Kissimmee is about seven miles from Disney’s door,” notes Belinda Ortiz Kirkegard, Kissimmee’s Economic Development Director. “So, as you can imagine, the City developed as Disney grew and blossomed. But when the economy crashed in 2008-09, the first thing that people eliminated from their home budgets was their vacations, so we suffered miserably as a Central Florida community. In 2009, as we see now during this COVID-19 pandemic, we saw that our region has a more diverse portfolio of industries. Kissimmee has spent the last decade working towards just that.”

The City of Kissimmee’s Economic Development Office was established in 2009 and is responsible for developing the marketing strategies and incentive packages designed to attract and retain corporate residents in the City of Kissimmee. The office is also responsible for planning, coordinating, and executing its economic development and redevelopment initiatives. Some of those duties include working with developers and entrepreneurs to facilitate real estate development in key City redevelopment areas. The Economic Development Office also promotes City attributes that provide an extraordinary quality of life for residents and businesses alike.

Kirkegard explains that the two sectors where the City saw excellent growth opportunities were the medical and aerospace industries, both of which create high-value, high-wage jobs communities desire. Regarding the medical industry, she explains, “we are fortunate to have two strong hospital chains represented within our City. Osceola Regional Medical Center, a Level Two trauma center, has invested over $200 million in campus expansions or improved services lines and generates more employment. The other chain is AdventHealth – Kissimmee campus. They, too, invested over $100 million in campus expansions – in just the last five years, they have doubled their footprint and are still in construction mode. They finished constructing a massive surgical ward, approximately 22,000 square feet of specialized space, and they are adding four more floors to the tower.”

“Both hospitals are within a mile from each other, and we wanted to capture the synergy between the two, so we created a Medical Arts District in 2016,” Kirkegard continues. “Within it, we designed economic development incentives to attract medical companies into this area. We’ve been successful in not only seeing these hospitals grow, but smaller practices have also grown and flourished.” In fact, since the inception of the Kissimmee Medical Arts District, dozens of new medical companies have opened their doors, and this 1 square mile medical district has over 4,000 medical jobs. The district is the third-largest medical cluster in Central Florida.

The aerospace sector is centered around the Kissimmee Gateway Airport. “Kissimmee has its own general aviation airport,” says Kirkegard. “It’s the closest airport to the theme parks and the Orange County Convention Center, so when corporations and individuals fly in on their aircraft to go to these locations, this is the airport they use. It caters to a unique clientele..”

The City’s strategy at the airport was focused on growing the aviation industry’s workforce. “For companies to want to invest and locate in the community, it needs to have a workforce,” Kirkegard avers. “So, one of the first things we did was work to attract academic aviation schools. We had a couple of different flight schools, so we worked to attract an avionics school (avionic technicians are in high demand). We also attracted an airframe and power plant (A&P) school – another technical profession, whose average entry-level wage, after this two-year training, is between $70,000-$80,000 a year. That’s how in-demand those positions are. So now, when we talk to companies that want to locate at our airport when they ask us where their workforce is coming from, I’m able to say, ‘we’re growing your pipeline right here.’”

Airport infrastructure is also on the City’s plan. “At our airport, we have a significant amount of investment occurring,” she said. “We have a taxiway expansion that’s coming online, in the eastern quadrant of our airport, which should break ground next year. Additionally, Holland Shelt Air recently was awarded an RFQ to redevelop approximately eight acres worth of land on that side of the airport. They’re actively working to develop custom-built facilities for interested parties. On the west side of the airport, we have two large facilities breaking ground in the coming months in our Business Airport – each valued between $2 – $3Million. Then in the southern quadrant of the airport, we have a manufacturing expansion coming online. It’s an exciting time for our airport, with all the activity occurring, and we welcome more investments.”

Attracting new companies to the community is one leg of the Economic Development Office’s three-legged stool agenda. “There’s also helping existing companies stay and grow, and the third leg of the stool is encouraging start-ups,” Kirkegard states. “We handle all three.” Regarding the first leg, the City offers incentives to companies coming in if they meet specific benchmarks.

“Expanding companies are equally important,” Kirkegard adds. “You want to retain them and help them grow because they are part of our community’s fabric. When it comes to supporting new start-ups, the City contracts with non-profits organizations that specialize in that pursuit. We fund non-profits like the Small Business Development Center or the University of Central Florida Downtown Kissimmee Incubator program. We fund these programs, so aspiring entrepreneurs can get the support and coaching they need, at no cost to them.”

Meanwhile, Kissimmee offers many other attributes and assets to newcomers and current residents. It currently has over $100 million invested in infrastructure projects, including several road widening initiatives on major arteries. It is also in the process of creating a comprehensive trail system for walkers, bikers, and runners, that, when complete, will link the City with trail systems in Osceola County, Orange County to the north, and the City of Orlando.

Through the Florida Municipal Solar Project with Kissimmee Utility Authority (KUA), the City of Kissimmee has powered all its public facilities with solar energy since June 30, 2020, said Melissa Zayas-Moreno, the City’s Communications and Public Affairs Officer. The Florida Municipal Solar Project is a partnership between the Florida Municipal Power Agency (FMPA) and 16 Florida public power utilities. It’s a large-scale renewable energy project that will enable KUA to provide solar power most cost-effectively and lock in a price for power for the next 20 years. The solar sites generate a total of 149 megawatts of emissions-free energy – enough to power 30,000 homes. KUA is among the first six Florida cities to receive power from the project. There were no up-front costs for the participating municipal electric utilities, and KUA will only pay for its purchases.

Although the City is known worldwide for its strong tourism roots, it no longer relies 100% on tourism. Today, the City of almost 75,000 residents has many more opportunities for investors and developers, especially in the medical and aerospace sectors. “We are fortunate to have a leadership team that has a strong pro-business mindset,” she states, “and we’re happy to report that we’re open for business!”

WHERE: In Osceola County, south of Orlando, FL

Colonial Life has been proud to support workers serving the Kissimmee area for many years. In today’s challenging times, we’re well aware of the significant responsibilities government employees have carried, and we’re grateful for the frontline workers, first responders and essential workers that keep Kissimmee going.
Everyone is feeling more vulnerable about their families’ health and wellbeing and we’ve made it a priority to ensure our benefits are available to workers, wherever they are. Protecting employees against the unexpected is what we do, and what we’re committed to continuing no matter the challenges our communities face.
As a leader in voluntary benefits and enrollment solutions, we know how important it is for employees to have access to personalized counseling and communications in order to best select benefits that will protect their families. Our focus on virtual enrollment and other flexible approaches to person-to-person benefits counseling is helping bridge the gap and keep organizations moving forward. And in a recent benefits enrollment survey, 97% of consumers said their benefits counselor improved their understanding of benefits.
We want to emphasize how much we appreciate everything workers do to provide services to citizens in the Kissimmee area during these unexpected times. And we’re grateful that we can play a part in supporting them, as well as the 8,000+ state and local government organizations we support every day. Colonial Life. Keep Unexpecting. ®