The Walton Beverage Company, based in Ferndale, Washington, began as the Walton Fruit and Produce Company in nearby Bellingham, in 1931. According to current company CEO, Ford Carothers, the original owner of Walton Beverage was Harold Walton, who began the business when he was still a teenager. Young Walton used to travel to the eastern part of the state to pick up apples, peaches, onions, and other foodstuffs, and then truck the produce back to the western counties. “Sometime around 1934 or ’35,” says Carothers, “somebody in Seattle said, ‘Hey, there’s this new product called Pepsi-Cola. You might want consider peddling this off your truck.’ In those days, soda pop was not an item you would regularly find in a grocery store, and people didn’t consume very much of it; it was just a bit of an add-on.” 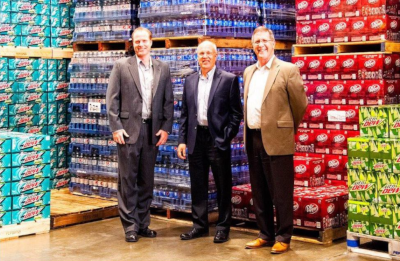 Apparently, Walton’s add-on proved to be popular with his customers. “Well, as time went on, it became bigger and what started out as a very small idea morphed into him becoming a Pepsi-Cola bottler and he felt it would be more profitable to build a small bottling line in Bellingham, which he did in the summer of 1941, right before World War II” Carothers recounts. “He made Pepsi-Cola products and a few other brands – 7-Up and Hire’s Root Beer – and then that expanded after World War II into a larger bottling facility in Bellingham, in 1947. The business continued to grow into what we have now. Harold Walton had three children – two sons and a daughter. One of the sons, John Walton, currently is the President of Walton Beverage.”

Carothers explains that, like many similar companies in the industry, Walton Beverage no longer actually makes its soda products, but still continues to distribute them. “Most of the smaller bottlers have not actually made our own product for forty or fifty years,” he explains. “We’ve aligned with other bottlers to form co-ops. Here, in the northwest, we have two large, modern facilities that make the product for PepsiCo’s company operations and for the independent bottlers here, of which there are thirteen. There are two sites, one in Mt. Angel, Oregon, and one in Tumwater, Washington. Those are the places that receive concentrate. That concentrate, mixed with sweeteners and water, create the Pepsi that you put in cans and bottles.”

Today, Walton Beverage has 135 employees, over 30 delivery trucks, and two dozen trailers. The company delivers Pepsi and other products to large national chains, such as Wal-Mart, Target, Kroger, Safeway, and Albertsons, as well as to many local, independent stores throughout four counties in northwestern Washington. “We also have over 1,500 vending machines throughout the area” says Carothers. “We are a full-service vendor. We not only vend beverage products, we also have snacks and some food items.” Thus, other Walton Beverage clients include casinos, universities and colleges, restaurants, bars, hospitals, hotels and motels, and golf courses.

Recently, the company has expanded its product range. “From 1931 until 2014, we essentially were a distributor of the soft drinks and non-alcoholic products that are either managed by, or owned by, PepsiCo – all the Pepsi products: Aquafina Water, Lipton Tea, Frappuccino, Gatorade, products like that,” Carothers says. “In 2013, when I came on board, the company had been looking at beer and wine as, potentially, a category that they would get into. We applied for the applicable licenses, and in 2014, we began selling craft beers that are produced in the northwest. We also sell local wines produced here in Whatcom County and we even have a couple of local distilleries that we sell.”

Carothers continues: “Pepsi is our most important brand, but we focus on many things, now. We sell some innovative food products; there’s a product called Moon Cheese – a product that was developed in British Columbia that’s manufactured right here in Ferndale. It’s a cheese product produced with new technology which pulls the moisture out of the cheese without de-naturing the product. So, we’re looking for ‘Better for You’ foods and snacks that meet the needs of the consumer. This business will help offset consumer trends which are driving declining CSD (carbonated soft drinks) consumption. Alcohol sales also allow Walton Beverage to reach out to new consumers.

Carothers believes that Walton Beverage distinguishes itself from its competition in several ways. “The greatest differentiation between us and our competitors,” he says, “are the brands that we carry, including the number-one water, Aquafina, and the number one isotonic, Gatorade. Lipton, Frappuccino, and Sparkling Ice are all leading brands in their categories. Our Service Department provides invaluable support to our selling teams and our Vending sales team. All of our employees are aligned with a ‘can do’ spirit instilled by the Walton family over the past 85 years; our people are more important to us than the brands.”

When asked where he would like to see the company several years up the road, Carothers speaks optimistically about its newest market segment. “Strategically, we want to make sure that we’re growing categories that really show significant growth. If I had to pick one category it would be beer,” he explains. “Craft beer is growing nationwide at about 20 percent a year. It will become a significant revenue stream for us. Again, we’ve only been in it now for about a year, but if I had to look at one thing in five years – if we can hit a home run with craft beer, that would probably be the single best thing that we could do in addition to our existing brands.”

Rich in family tradition, and with an unwavering commitment to delivering quality drinks and snacks, Walton Beverage looks poised to continue its 85-year run as one of northwestern Washington’s premier, full-service vending and distribution companies. 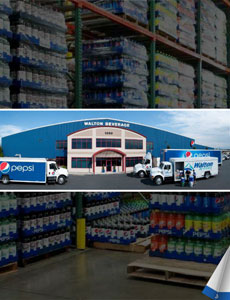