Unique in the commercial aviation industry

There are approximately 128,000 used-car dealerships in the United States and an untold number of junk and salvage yards that deal in the recycling of used automobile parts. But in the commercial aviation sector, there are only several dozen companies that buy, sell, manage, lease, disassemble, and/or recycle retiring aircraft and aircraft components. One of the country’s leading companies in this field is Universal Asset Management (UAM), headquartered in Memphis, Tennessee. 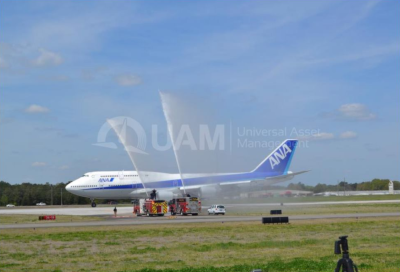 According the Shawn Kling, UAM’s President, the company was founded in 1992 by Steve Manley, an intrepid entrepreneur, who saw the value in used aircraft engines that were in excellent shape and could be sold or traded. In the beginning, Manley found someone who was selling one engine and someone else willing to buy it. “So, it was a very simple transaction,” says Kling. “He took a second mortgage on his home, flipped it, and made some money, and said ‘this might be a good business to be in.’” Manley’s gambit soon paid off handsomely.

Over the years, UAM grew from buying engines to buying entire aircrafts as well as individual components, such as landing gears, etc., that can be recycled and sold to thousands of customers in 150 different countries around the world. Today, UAM has contracts with many of the largest airlines, including Continental, Southwest, American, and Omni International. In addition to its global headquarters in Memphis, the company has offices in Atlanta, Beijing, Indianapolis, Toronto, Malaysia, London, South Africa, and the Middle East. It also has a 453,600 square-foot warehouse and disassembly facility in Tupelo, Mississippi. UAM did the first ever Boeing 777 disassembly in the world and Kling maintains that the company is the preeminent expert on the entire suites of both Boeing and Airbus aircrafts.

“We get our supplier components from aircraft that we purchase and/or aircraft that we’ve been hired by the largest airlines and lessors in the world to manage. But most of our inventory comes from aircraft that we buy,” says Kling. “They come to us because they’re either being replaced or it could be simply a matter of they want a more fuel efficient airplane. Sometimes they’re not even that old. It’s just that that particular model may no longer suit the route that that particular aircraft was flying; maybe demand has increased or decreased so they want a bigger plane or a smaller plane to accommodate a different passenger configuration that’s more profitable. So that particular airline will opt to start retiring some of those aircraft early and sometimes they’ll retire a whole fleet. Usually they will retire a few at a time – but that doesn’t mean that other airlines in the world aren’t going to still continually fly those fleets for years and years.”
Kling explains that while some small start-up companies have appeared recently to take advantage of the fact that many airlines were retiring their “gas guzzlers,” UAM is not only one of the first companies in its field, it is the only privately-held company of its size left in the world. “Everyone else has been bought out by different VC funds, hedge funds, or banks; we are the only one that hasn’t been acquired,” he says.

What also differentiates UAM is that it only uses licensed, Airframe and Powerplant (A&P) mechanics who are certified by the Federal Aviation Administration (FAA) and precisely trained in aircraft disassembly. “When you’re removing components,” he says, “the slightest error if you make a bad cut, if you bend something, you can completely remove all the value out of that component. So if you have a door, for example, that would sell for $50K on an aircraft, and somebody who doesn’t know what they’re doing goes in there and cuts the door out, that door’s worth nothing now. We have a reputation in the industry as being extremely surgical in our removal process – very, very precise and measured.”

Kling says that for UAM, 80 percent of the value in an acquired aircraft will be in its engine. “The other 20 percent of the value is in the airframe side of things,” he says. “Depending on the plane, there’s between 80 and 120 airframe components. So we focus on the 120, fast-moving, high-demand items. What’s left over is aircraft aluminum for the most part. For those parts that are not high demand, we recycle those materials. We’re recycling about 75 percent right now; our goal is 95 percent in the next three years.” 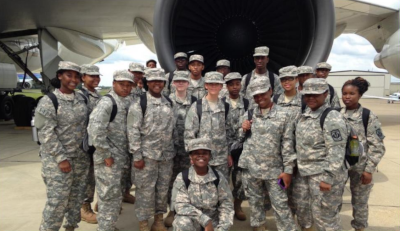 For UAM’s clients – the airlines, banks, lessors, and/or fund managers that own the assets – the company’s value lies in its ability to provide a healthy return on their original investments. “When an airline invests in a new aircraft, it has to ascertain what it will get out of it when it’s being used as well as when it’s being retired,” Kling explains. “The most important thing to them as it relates to us is the book value and residual value of these assets as they age and get to the point where the sum of the parts is greater than the whole. You want to pick a company that knows what it’s doing and that has a marketplace for these components. If you don’t, then you’re not going to get the maximum value out of that retiring asset and depending on what’s owed on that aircraft, it could really make a big difference in your gain or loss – it’s critical. We have an aircraft acquisitions group here; they know what aircraft components are selling. We have a proprietary model that is highly sophisticated that allows us to forecast and look for certain aircraft types down to the very finest detail that will give us the highest yield in the current marketplace.”

In 2013, UAM was bought by Keri Wright, who had been the company’s COO for several years. According to Kling, Wright was “responsible for the stratospheric growth and profitability of the company for the last ten years, and was really the one that put the company on the map. She’s a widely-recognized expert in this field. She’s smart, driven, disciplined, and tough,” he says. In 2014, Aviation Week acknowledged Wright as a “40 Under Forty” honoree. This past year, she was selected as “CEO of the Year” by Inside Memphis Business magazine.
UAM, itself, was recently included in Inc. Magazine’s Inc. 5000 Fastest Growing Companies list for 2015, having achieved a three-year growth rate of 430 percent. Kling says that UAM‘s future plans include some additional growth in Asia and that the company is particularly interested in looking for opportunities in China. “We’re also looking at some more expansion in Europe and possibly South America,” he adds.

When it comes to used cars, almost any corner business will do. However, when it comes to the used aircraft business, UAM and its 139 employees are clearly in a class by themselves. “We are the most experienced people in the world that do this,” states Kling. “We really are the experts. We wrote the book on a lot of this stuff.”

Check out this handpicked feature on PRC Composites – Containers for aerospace and defense. 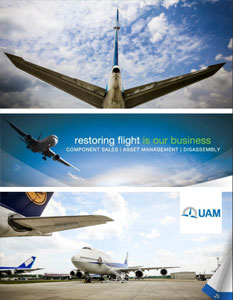