January 2015Past IssuesSupply Chain and Logistics

Its founder, Brent Parent, actually began the operation in 2001 as a means of providing consulting services to companies in need of help with their forklift fleets. But the function quickly changed, Parent said, when it became apparent that the consulting environment was heavy on data and ideas and light on people who could implement and fulfill those ideas.

“We became a hybrid of somebody that provided ideas and provided data and actually went out and implemented the ideas,” he said. “So we were a fulfillment team.”

The company’s evolution has, in some ways, followed the evolution of the concept of outsourcing.
Early on, Parent said, companies looking to outsource were most often looking to save costs and save workload on in-house staff – with the mandate being that the outsource partner simply provide the services nearly as well as the originating company. These days, he said, the companies on the highest end of the outsourcing spectrum are those that provide the people, systems and processes that take what those retail, manufacturing and distribution customers did to a more effective level. 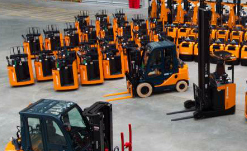 In other words, they take the clients’ desired core competencies and make them their own, with the idea that they can ultimately provide something better than the clients could provide for themselves.

And in the Total Fleet Solutions case – if they can’t add value, they won’t even try.

Total Fleet Solutions is owned by a private equity firm – CI Capital Partners – which Parent said makes it unique in the material handling space, and more able to be aggressive in pursuing acquisitions.

Five such deals, in fact, have been made in the last 24 months, with the largest coming in the form of the Miner Corp., a San Antonio, Texas-based that delivered mission-critical facilities services and asset management solutions for retail, distribution, manufacturing, healthcare and hospitality companies.

“We want to grow both organically and via acquisition,” Parent said.

“If there are companies out there that provide good services in this space – and a lot of it may be geographic – we would rather buy them via acquisition as opposed to hiring their people or hiring people to go compete with them. We see ourselves being somebody that wants to continue to grow, to add more capabilities for our customers. If we find a company that we think would be a nice offering for our customer base or our prospect base, we attack it with a vengeance.”

The company workforce now numbers in at 900 across 25 states, and another 25,000 entities – labeled as vendors, affiliates, partners or subcontractors – are utilized both in the states in which the company does not already have an employee presence, as well as in some states where it does. There are larger operations groups in some states and smaller groups clustered around territories where the company wished to have a presence, or around locations where its customers are.

The corporate aim, Parent said, is to have an employee presence in all 50 states within five years.
Total Fleet’s initial customers were Fortune 500 manufacturers and distributors that were having trouble outsourcing because of the fragmented nature of the material handling industry. Those companies were ones with at least 20 locations and at least 200 forklifts. Since then, capabilities have been added to service retail customers with thousands of locations, but fewer assets per location. An additional offering has been created, too, to serve smaller customers via a separate business unit.

Ninety percent of revenue now comes from Fortune 1000 clients, Parent said, and the battle for those customers is typically fought on one or more of three fronts along what he called “the asset lifecycle.”

The first front is the delivery, procurement and financing of assets to customers, and Total Fleet is one of roughly 15,000 companies competing in that space. The second relates to the safety, productivity, operation and maintenance of an asset, and is a space also occupied by as many as 15,000 individual companies. The third front is the data used to manage the assets and companies, and just four or five competitors are able to navigate what Parent called “a tangled web” with any success.

The difference between Total Fleet and the 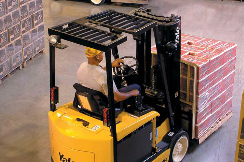 rest, though, is the availability of a one-stop shop.

“They want someone who can do it all, and do it all well. That was the niche we hit on. If you’re taking Fortune 1000 outsourcing decisions, you better have some services that give them the ability to fully outsource. Those were the customers we focused on. The things they liked were that we were independent, so we could recommend the best solution regardless of the brand of equipment or the provider of maintenance.”

Parent claimed the strategy came as much from determining what customers out in the field wanted as it did from a single or series of master strokes made in an executive’s corner office.

“I’d like to say by good strategic planning we made good decisions, but just as much of it was just feeling our way through,” he said. “Our opinion very early on was, if the customer is going to outsource to us, we need to be different than the current suppliers. There were suppliers that were good in each of those phases, but there was no company that was good in all of them.”

And going forward, Parent said, the ability to maintain top-shelf status will be based on people.

Total Fleet recruits potential employees both from material handling functions and outside it, with a primary focus on fresh ideas and fresh solutions for perpetually evolving problems and concerns. 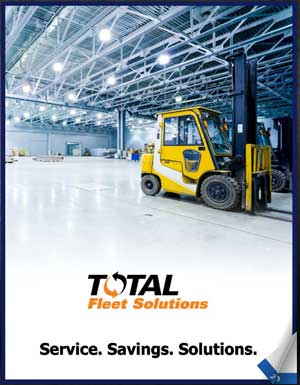