Hallandale Beach, Florida, with a population just over 40,000, is roughly four square miles in size. It is bordered by I-95 on the west, the Atlantic Ocean on the east, the City of Hollywood to the north, and the city of Aventura and the Dade County line to the south. The city was named after Luther Halland, who was recruited by railroad magnate, Henry Flagler, owner of the Florida East Coast Railway, over a century ago, to found a settlement south of the community of Dania. Halland constructed a small trading post and became the first postmaster of the small hamlet. By 1900, it had slowly grown to a dozen families. In 1904, the first school was built, and the first church followed two years later. Hallandale Beach, Florida was primarily a farming community; the beach was undeveloped and used by the residents only for recreational purposes.

Hallandale Beach, Florida was incorporated on May 11, 1927, the eighth municipality in Broward County. By that time, a thriving community of 1,500 residents, with electricity and street lights, was in place. In 1947, Hallandale was reincorporated as the City of Hallandale, allowing it to expand its borders through annexation of nearby unincorporated land lying adjacent to the Atlantic shore. On August 27, 1999, the city officially changed its name to Hallandale Beach.

Today, Hallandale Beach, Florida is probably best known as the home of two racetrack/casino/entertainment venues: Gulfstream Park, which features horse racing, and The Big Easy, formerly known as Mardi Gras Casino, which hosts greyhound racing. Gulfstream Park first opened in 1939, and for decades was one of the most important venues for thoroughbred horse racing in America. Now, the complex is a thriving village of shops, restaurants, art galleries, outdoor cafes, bars, and nightclubs, employing more than 2,000 people and welcoming hundreds of thousands of visitors, annually. The Big Easy originally opened in 1934, as the Hollywood Kennel Club, three years after Florida legalized pari-mutuel betting. It closed for several months, in 2017, after being damaged by Hurricane Irma, and was purchased in 2018 by real-estate mogul, Jeffrey Soffer of Turnberry Associates, a world-class developer. Today, The Big Easy has several entertainment venues that host nightly performances and year-round events, including concerts, stand-up comedy, dance competitions, and MMA fights.

While the two casinos are major economic drivers, there is still a significant amount of reasonably-priced land available for new investment opportunities. Numerous residential and commercial projects have recently been completed and more than $1 billion worth of projects are under construction, planned, or approved by the City. More than 80 percent of the City’s land mass is designated as a Community Redevelopment Area (CRA). The mission of the Hallandale Beach Community Redevelopment Agency (HBCRA), first established in 1996, is to enhance the quality of life by eliminating and preventing blighted conditions through the facilitation of community partnerships, business growth, job creation, and neighborhood revitalization. “There’s great vibrancy taking place in our community,” exclaims Greg Chavarria, who became City Manager this past April. “And we look forward to having more developers become part of our community.”

Developers and investors like consistency, predictability, and efficiency in local governments. To that end, the City of Hallandale Beach has been ranked as a Platinum City by the Greater Fort Lauderdale Alliance and has adopted a streamlined permitting ordinance that has cut down the time it takes to get a plan review or building permit by more than half. In addition, the City offers a host of incentives and programs for existing businesses, as well as newcomers, including: a facade improvement grant, an interior renovation grant program, a low-cost or no interest loan program, a property tax reimbursement program, a neighborhood amenity incentive program, and various incentives for development in the city’s Fashion, Art, and Design District (FADD), among others.

Chavarria adds that the City is also intent on providing affordable housing for the workers in the growing high tech sector in the south Florida region. The HBCRA sponsors a First Time Buyer/Affordable Housing Program that assists qualified persons with financial help. “We’re being inclusive and embracing of all aspects of the community and we want to attract a diverse population as much as possible,” he states.

Hallandale Beach, Florida is also a city of parks; there are 17 of them, and its Parks Master Plan initiative aims to improve all of them by 2020. This past August, Peter Bluesten Park reopened in the southwest quadrant of town – six city blocks were completely rebuilt from the ground up. The $26 million project includes a 40,000-sq.-ft. YMCA that will operate the park and all the related programs usually run by the city. There is a new community recreation center with an indoor basketball court, weight rooms, meeting rooms, administrative offices, restrooms, and lockers. Other Park amenities include: a community pool, tennis courts, basketball courts, a multi-purpose sports field, three baseball diamonds, racquet ball courts, walking/exercise trails, exercise stations, playgrounds, and a field house with restrooms.

The City also has a Sustainable Action Plan, which lays out every sustainability initiative it will implement over the next five years. This project-driven action plan focuses on the following areas: Resource Conservation and Efficiency; Materials Minimization and Recycling; Land Use and Transportation; Natural Resources and Resiliency; Education and Outreach; and Funding and Evaluation. 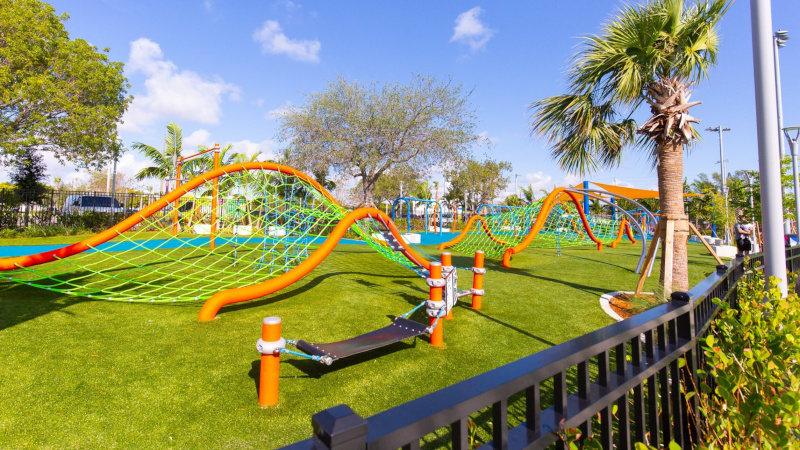 “We have various green initiatives that help us protect our surroundings and provide resiliency for the community,” says Chavarria. “We have been very fortunate to win various green-related grants. For instance, we were awarded funding by TD Bank to do a bioswale. (Bioswales are linear channels designed to concentrate and convey stormwater runoff while removing debris and pollution. Bioswales can also be beneficial in recharging groundwater, as they are, typically, vegetated, mulched, or xeriscaped.) We were one of the first cities in South Florida to implement a plastic straw ban. We are also partnering with the Weather Channel, so that we can provide further statistics and data values for resiliency planning that can be used on a national level. And we’re looking forward to providing innovative opportunities for energy efficiency by implementing energy-efficient lighting across all of our facilities.”

Efficiency in its properties is mirrored by the City’s devotion to efficiency in its operations. At the time Chavarria became City Manager, he reveals that Hallandale Beach, Florida was facing a $9 million budget deficit. “We were able to bring the deficit down to $1.7 million by merging certain divisions and providing better cost efficiencies for the taxpayers,” he explains. “We had an experience where our reserves were down to less than 16 percent and we’ve done many cost-control measures so we can increase our reserves to a goal of 16 percent. We’re also looking at having opportunities to partner better with our community and let some of our corporate sponsors sponsor some community events that we used to do, before.” In addition, the City implemented a modified 4/10 work schedule, where City Hall is open for extended hours Monday-Thursday, from 7AM to 6PM, and closed on Fridays. “By doing that, we conserve energy, conserve on janitorial services, and bring better cost efficiencies for our operations.”

In a bid to increase public safety, Hallandale Beach recently regionalized its fire service, merging it with the county’s, in order to provide better training and an improved ISO rating, which currently stands at 2. (ISO stands for the Insurance Services Office, a private corporation that evaluates industries for insurance rating purposes. An ISO fire insurance rating, also referred to as a fire score, is a score from 1 to 10 that indicates how well-protected a community is by the fire department.) Chavarria hopes the City can attain a 1 rating.

As Hallandale Beach continues to grow, it remains true to its motto: Progress, Innovation, Opportunity.

Douglas, Arizona – Building the foundation for...