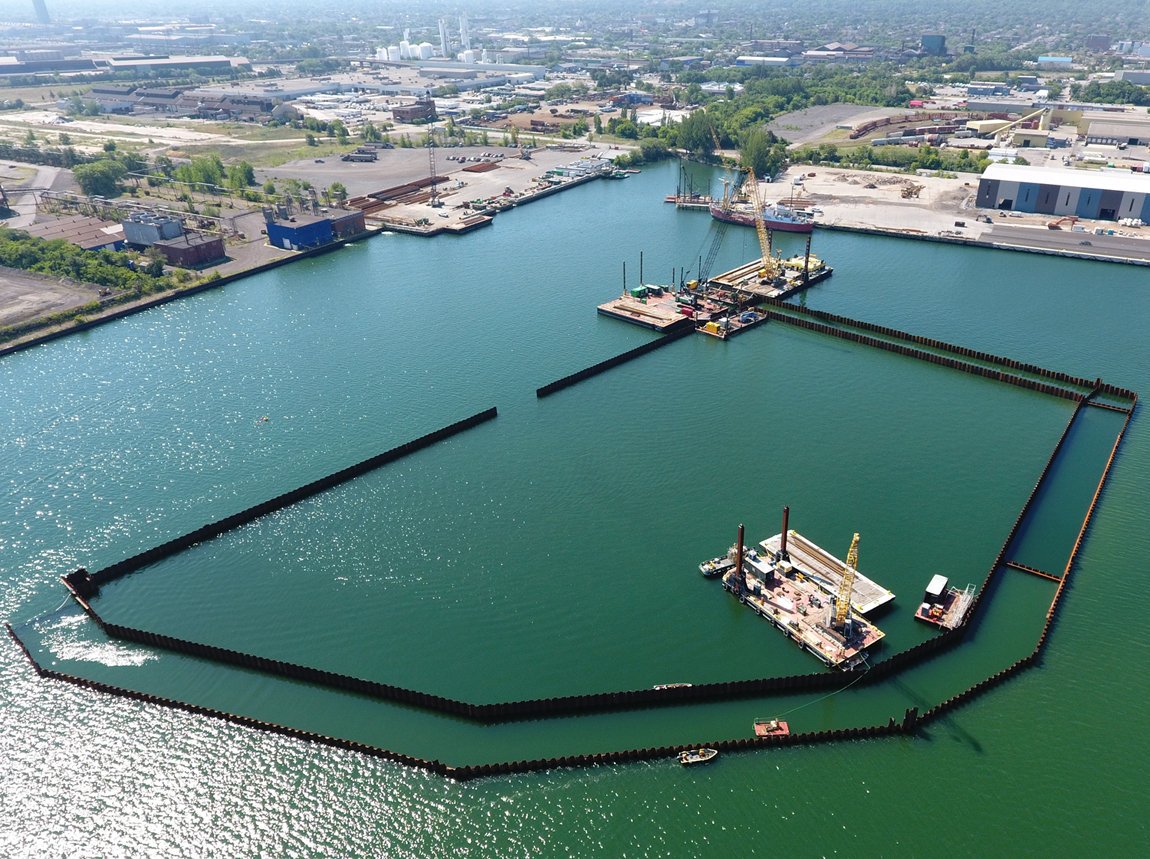 Cleaning up the environment and improving water quality for the benefit of Canadians, while creating middle-class jobs, remains a high priority for the Government of Canada.

At the announcement, Minister McKenna was accompanied by the funding partners of the Randle Reef Contaminated Sediment Remediation project, representing the Ontario Ministry of the Environment and Climate Change, the City of Hamilton, the City of Burlington, the Hamilton Port Authority, and Stelco. Project partners also had an opportunity to tour the project site to see first-hand the significant progress already underway.

The awarding of the stage-two contract is a significant milestone for the project and a clear demonstration that the project continues to move forward. As part of this contract, the company will dredge contaminated sediments from the harbor floor and place it into the engineered containment facility, currently under construction in the Hamilton Harbour. Work for stage two is scheduled to begin in the spring of 2018 and is expected to be complete in 2020.

The Randle Reef cleanup is one of the largest remediation projects currently underway in Canada. The Government of Canada is leading the project in partnership with the Province of Ontario, the City of Hamilton, the City of Burlington, the Halton region, Hamilton Port Authority, and Stelco.

“Our Government is committed to cleaning up the environment while investing in communities and creating middle-class jobs. The awarding of this contract for stage two of the Randle Reef cleanup is another significant step forward for the benefit of the environment, local residents, and the businesses who will generate revenue as a direct result of this contract, as well as those who will benefit indirectly through stimulation of the local economy.”

– Steven MacKinnon, Parliamentary Secretary to the Minister of Public Services and Procurement

“Awarding the stage-two contract signals the start of the heart and soul of this project—removing and containing contaminated sediment from Randle Reef. I am delighted to mark this milestone in my hometown. With the support of the community and our project partners, our government is making real progress in our commitment to clean up Hamilton Harbour and our Great Lakes and restore this invaluable freshwater resource for all Canadians.”

“This contract award is good news for the City of Burlington. It brings us that much closer to restoring this shared resource for the benefit of our local economy, the environment, and future generations. I commend the progress to date and look forward to celebrating future milestones with our partners on this important project.”

– Karina Gould, Minister of Democratic Institutions and Member of Parliament for Burlington

“This is a major step for this project and for the City of Hamilton and surrounding area. Working together towards the remediation of Hamilton Harbour demonstrates the government’s commitment to protecting our environment and returning this beautiful waterfront to our local community and beyond. This would not have been possible without the dedication and cooperation of all the partners present today.”

“Together with our partners, the Province of Ontario is pleased to announce phase two of the Randle Reef remediation in Hamilton Harbour. With the construction of the containment facility walls now taking shape, we are ready to take the next step in reducing contaminant levels and effectively restoring the natural environment.”

“I am thrilled to see the Randle Reef project moving forward today. My involvement in this initiative has spanned a number of decades, and this important cleanup effort will be of significant benefit to Hamilton and beyond, with the improvement of water quality and generating economic returns through the creation of valuable waterfront lands. I applaud the work of all the partners who have committed to the remediation.”

– Fred Eisenberger, Mayor of the City of Hamilton

“In Burlington, we are committed to a healthy and greener city, and that means sharing the responsibility for cleaning up Randle Reef in Burlington Bay and Hamilton Harbour. I want to thank all our partners who are moving this project forward, improving, and restoring this asset for future generations.”

– Rick Goldring, Mayor of the City of Burlington

“When the Randle Reef project is complete, it will change not only the physical landscape and the water quality but also the perception of Hamilton Harbour as a magnificent natural feature of our region. Hamilton Port Authority is proud to be a partner in this continuing journey.”

“As a proud partner in the Hamilton community, Stelco is pleased to have contributed to the betterment of the local environment and the health of our city’s waterfront through participation in this transformational project.”

The Randle Reef Contaminated Sediment Remediation project involves building a 6.2 hectare engineered containment facility on top of a portion of the most contaminated sediment, dredging the remaining contaminants surrounding the structure, and placing them in the engineered containment facility. The entire remediation project is expected to be fully completed in 2022.

The project has a total budget of $138.9 million, with funding from the Government of Canada, the Province of Ontario, the City of Hamilton, the City of Burlington, the Halton region, the Hamilton Port Authority, and Stelco (formerly U.S. Steel Canada).

A fairness monitor was engaged as part of Public Services and Procurement Canada’s Smart Procurement initiative to ensure independent advice during the procurement process.