Beef capital of the world

Deaf Smith County is a rectangular expanse of land, 50 by 30 miles, located in the southwestern part of the Texas Panhandle, bordering New Mexico. Originally the home of the Apache, Comanche, and Kiowa tribes, the county was created in 1876, later organized in 1890, and named for Erastus “Deaf” Smith, a partially deaf scout and soldier who served in the Texas Revolution and was the first to reach the Alamo after its fall.

This semiarid, high plains county sits atop the Ogallala and Santa Rosa Aquifers, today, its main source of water for consumption and irrigation. Its economy is built on farming – wheat, cotton, sorghum, other grains and vegetables – ranching, and feedlots. The City of Herford, located 48 miles southwest of Amarillo, is the county seat and its only incorporated city. Hereford’s population is 15,000 – three quarters of the entire county’s. It was named for the Hereford breed of beef cattle, and the city calls itself the “Beef Capital of the World.” 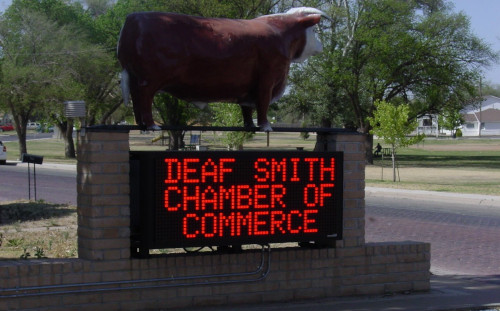 Hereford first grew as the county’s main transportation hub at the turn of the last century, after the Pecos and Northern Texas Railway, a subsidiary of the Santa Fe line, built tracks from Amarillo to the Texas-New Mexico border. Today, the Burlington Northern Santa Fe Railway (BNSF) still runs 75 trains a day through the heart of town. Highways began to run to and from Hereford as early as the 1920s, facilitating better movement of farm products, and linking it all to parts of the county and beyond. Today, the city is also served by the Hereford Municipal Airport, which offers a lighted, 6,100-ft. runway and can easily accommodate large corporate jets.

Caviness Beef Packers, a major area employer, is located five miles southwest of Hereford on the north side of Hwy. 60. The company is currently expanding its operations and will be adding another 600 jobs to its workforce by year’s end. The Merrick Pet Care Company is another big employer in Hereford, and over the next several years, it will also increase its payroll by 500 new jobs. These looming expansions present several challenges for both the county and city as they struggle to supply enough water to their corporate entities and enough housing for their new residents.

Regarding the water situation, Hereford Mayor, Tom Simons, reports that in addition to improving its reservoirs, the city is drilling new deepwater wells on recently obtained land. “That’s going to be a long-term benefit,” he states. “It’s going, ultimately, to give us a water supply for 80 years. We have the Caviness packing plant, as well as one of the area’s ethanol plants inside the city limits, which is a big user of water. We also have Nestlé (corporate owner of Merrick), which is another big employer and they continue to add to their facility. They have somewhere between 900 and 1,000 employees and they continue to grow.”

Regarding housing, Wade Hawkins, Hereford’s Economic Development Coordinator, admits that even without the coming new jobs, the city is in “a bit of a housing crunch. We’ve got quite a few custom-built homes, but no spec properties to house incoming people that aren’t in the market for a custom home,” he explains. “So, with those needs in mind, we’ve contracted a residential developer that has purchased 92 acres that adjoin the city, and will be annexed by the city, so it will have all city utilities supplied to them. That will initially be 240 lots for single-family housing. A few of those – 20 to 30 – will be for either duplex or townhomes. So, hopefully, that will give us head start. We do have an apartment complex that showed some interest. It’s going to be a nine percent, tax-credit facility that, if it’s passed by the state, will be a 48-unit complex going in the north of town. We’ve also got some local builders – one of them is looking at putting in 16 duplexes in another part of town, out by the community college. So, hopefully, we’re addressing some of those issues.”

Regarding upgraded amenities in Hereford, Simons reports the city will be building a new community center to replace one built in the 1950s. “It will be a state-of-the-art facility, primarily for the benefit of local citizens, but also for the benefit of out-of-town events and larger gatherings,” he says. “One room will have a capacity of 450, a smaller room for 150, and several other anterooms, as well as kitchen facilities. So, that’s a big project for us.”

“As far as our infrastructure in the city proper, the streets are in really good shape,” he adds. “We have some recreational issues that we’d like to address; we’re looking at doing some things at our ballparks. A school bond recently passed – that’s $22 million to do a lot of improvements to the high school, as well as a new field house, more updates at the football field, and then, some work on all the elementary and junior high schools here that’s badly needed.”

County Judge, D.J. Wagner, notes that the county’s major new infrastructure project will be a new jail. “We’re looking at a 192-bed facility to be located on the outskirts of the city,” he says. “Our current jail is over 60 years old, so we’re looking to keep up with growing needs.

Wagner also believes that the county needs to keep up with current trends in technology, and, since the Texas Panhandle is known for its sunshine and its strong, steady winds, Deaf Smith County is actively seeking alternative energy companies to come in and set up shop. “There’s a lot of wind energy in this part of the world; we have windy days all the time,” he remarks. “So, we offer those windmill companies incentives to be here to construct those. We’ve got several that have been here for several years, and several that are being erected, right now. A lot of solar generating plants have looked at us, too; we have some pretty sunny skies for the most part, most of the year. We’ve had a few that have started the process of purchasing some land and going down that avenue, and we are looking to incentivize them, as well.” 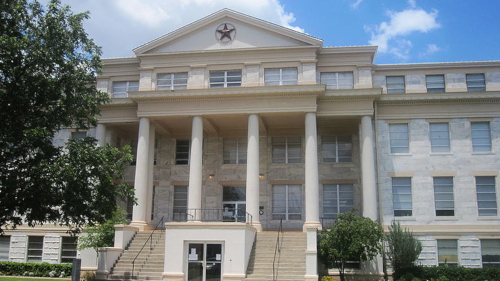 Hawkins agrees that incentivizing businesses to relocate or expand simply makes good sense. “The Economic Development Corporation’s job is to recruit industry and business to the City of Hereford and Deaf Smith County,” he states. “But each case is different; with Caviness, we did offer them a $1.2 million incentive, essentially $2,000 for every job they’ll be creating, in the form of a forgivable loan if those criteria are met over a stated period of time. We’ve done similar things with Merrick Pet Food. Certainly, if a business was interested in coming to Hereford, we would look into anything we could do to incentivize them to be here.”

Indeed, Hereford has proven to be a high-value, low-cost place to do business. With its convenient accessibility, highly productive workforce, favorable operating costs, aggressive incentives, and vibrant quality of life, Hereford provides a fertile environment for businesses to grow and prosper. Sitting at the crossroads of major shipping routes that stretch in every direction, Hereford provides easy access to markets, customers, and suppliers.  Whether by highway, rail, or air, Hereford’s transportation infrastructure facilitates fast, efficient flow of raw materials and finished goods across North America and the world.

“Agriculture and cattle are the things that drive us,” says Simons, “We’re very supportive of the agricultural industry and we’re going to continue to do that, going forward. All of the entities and expansions that we talked about are pretty much based on the ag industry. The reason the ethanol plant is here is because they have a co-product that’s fed to the cattle; the same way with the packing plant, the feed yards, the dairies, the agriculture that’s produced here – we’re geared toward that. But we are open to anything else, so, of course, we’re looking at other things, as well – sustainable energy, wind and solar. We have the right area for those kinds of things, and we’re positioned well with our water supply. We’re open to anyone who wants to move here.”

Simons ends with his own encomium to the good life in Deaf Smith County. “I’ve lived here for 47 years, and this place is a good place to raise a family,” he declares. “It’s a good place, with good, hardworking, trusting, God-fearing people. I think that makes us special in that regard.”

WHERE: The southwestern part of the Texas Panhandle,

Merrick Pet Care, which was founded in Hereford, Texas, in 1988, is a leader in natural and organic pet care. Last year, the company made significant investments in the Deaf Smith County by opening a new cannery, adding 150+ new jobs and increasing wages for 500+ local team members. 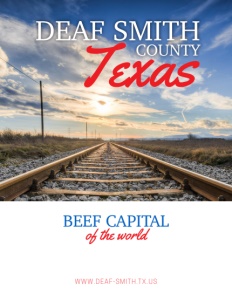