The Greene Turtle – An Inalienable Right to Dream

Authenticity and success is preeminently justified by one of the fundamental principles of our society: the inalienable right to dream. Dream and live the American dream. For Bob Barry, CEO of The Greene Turtle, and Tom Finn, VP of Franchising, that is now all about “continuing the heritage and legacy of a great story” by “cultivating the brand strength throughout the community,” franchising strategy and “expansion in the dynamic markets.”

The story begins in the idyllic Bahamas, Barry said, where two gentlemen came across a little bar in an area called Green Turtle Cay with a few seats and tin mugs for fruit drinks. The atmosphere was unique, so they decided to bring something similar back home to Ocean City, Md. It started out serving canned beer and shelled peanuts and, a few years later, two young employees who’d recently graduated from Salisbury State University, Steve Pappas and Tommy Dickinson, bought the business and diversified its signature by bringing in a sports component. 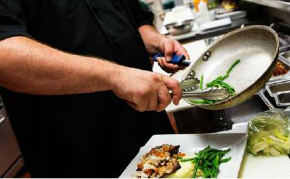 “They actually both played sports in Salisbury, and this is how sports came in,” Barry said. “They used to hang some of their equipment up – helmets, soccer jerseys, various things – and then installed a TV so they could watch sporting events. This is how it started.”

Another college friend, Bill Packo, joined the business and opened a location and food was added to the menu in the form of cold sandwiches, soups and some hot items. The restaurant began to outgrow its 1,600 square feet and soon expanded into two units next door.

“When it started it was more a bar than a restaurant. Over the last five years we’ve really changed the face of the restaurant and the business,” Barry said. “We’ve really focused on delivering great high quality food, especially in our sports-bar category, strongly focusing on the quality of service, at the look and the feel of the restaurants, the guest experience. We’ve done some fabulous things with the menu and the image of the restaurants to change the perception from a bar to a natural restaurant.”

Mike Sanford joined the group in 1990 and another location was opened in Laurel, Md. Eight years later, a pair of Greene Turtles opened in Edgewater and West Ocean City. The Greene Turtle Franchising Corporation was constituted in 2002 and the first two franchises opened their doors in Towson and Salisbury. Today, franchises operate in 37 locations, including 13 company stores and 24 franchise units in New York, Delaware, Maryland, Washington, D.C. and Virginia, with another on the way in Morgantown, W. Va.

Aside from its other attributes, The Greene Turtle is acclaimed for its contribution and involvement in its communities – particularly at sports-centric times of the year.

“The March college basketball season is one of those times of the year when our restaurants become even more popular as gathering places,” Barry said. “Friends and families cheer on their favorite teams or experience the excitement of heated competition. We want to reward customers for making us their top pick for great food, fun times and, of course, fandom. We’re expecting a thrilling, fulfilling time for many throughout our communities, and look forward to continuing to serve up a great experience all year round.”

Relationships are established with 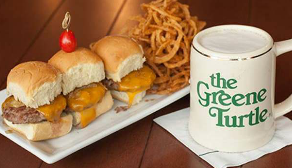 “I use the term four-by-four-by-four,” Barry said. “The four walls that we need to make sure that we do a great job internally, taking care of our guests. The four blocks around the business that we want to focus on and to get to know the other businesses around us. And then we market the four miles around us. We want to own the four walls that we have, the four blocks and a four-mile radius.”

When it comes to franchisees, the target characteristics include a strong financial capability, a strong existing development capability and significant multi-net restaurant operation experience.

“Market demographics has to be dynamic. An old quiet market that is shrinking is not the place we want to go,” Finn said. “We envision a circle or half-circle around the Mid-Atlantic, from Connecticut to New Jersey and Pennsylvania, to West Virginia down to the Carolinas. That’s our next circle of growth. In five years, I think, we will have 100 units operating on the Eastern seaboard with penetration beginning in the Midwest.

WHO: The Greene Turtle
WHAT: relaxed restaurant and bar franchise
WHERE: Ocean City, Md.
WEBSITE: www.thegreeneturtle.com 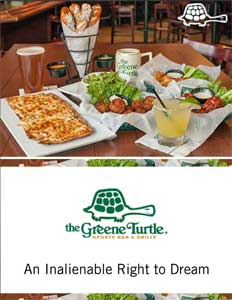