The cover of Business View Magazine’s July 2015 issue featured a picture of 76 year-old Manfred Lupke, President and CEO of Corma, Inc., one of the world’s leading producers of the machinery and die tooling equipment for corrugated plastic pipe manufacturing. Lupke, who immigrated to Canada from Germany in 1969, and went on to generate approximately 850 separate patents for innovative engineering, is still going strong, according to his son, Stefan, the company’s Executive Vice President. “We’re aiming at his 77th birthday, this summer, and he’s not going anywhere, soon,” the younger Lupke exclaims.

Recently, BVM caught up with Stefan Lupke to find out what has transpired this past year at the Concord, Ontario-based company. “Everything we do is to try and be technologically ahead of our competition or even ahead of what the customer is going to ask for,” he says. “So, we saw a couple of opportunities. One is for even large pipe. Corrugated pipe, right now, is limited to 60 inches – that’s pretty much the staple in the U.S. and Canada. We’ve developed a machine which is going to be making pipe 72, 84, and hopefully, 96 inches – that’s our target.”

Corma’s large corrugated plastic piping is generally used for sub-surface drainage and sewer applications and is especially preferable to concrete because of its lighter weight, easier installation, and longer service life. “Each concrete section weighs so much and they’ve got so many joints to do,” Lupke says. “It takes forever to install. You can do 20 foot lengths of plastic rather than three foot lengths of concrete.”

Working on a machine that can make pipe bigger than 60 inches is a project that the senior Lupke started awhile ago, but according to his son, “never put enough energy behind. Now it looks like it’s finally going to be realized and we’re pretty excited about that. People have hinted that they’d like to go bigger, but I don’t think they’re expecting it at any time soon. But now we’ve dedicated a team to this project and we’re hoping to have our trials done and have a 72” (1800mm.) I.D. pipe sample at the upcoming K show,” he says. K- 2016, the world’s largest trade fair for plastics and rubber, will take place in Dusseldorf, Germany, this coming October.

Another innovation at Corma is the new Corma Super Coupling. Lupke explains: “The piping system, generally, is only as good as the fittings – the whole coupling system. And what we’ve seen is – especially in North America – a number of the pipe producers are using a very, very short coupler. And the DOTs (Departments of Transportation) are complaining because when there are heavy loads on it – you have very little engagement between the male and female ends of the coupler. So the integrity of the whole structure is compromised. This is an issue, especially in the States, and there’s a lot of push back because of pipe system failures.

“But now we’ve got the solution, the Corma Super Coupling. The notion here is that it’s a longer coupler; there’s an extended sleeve so the walls of the female and male end of the coupling are always in contact. So, even if you don’t have the best installation practices, or you’ve got heavy loads, or deep burials, or even in an earthquake situation, if the pipe moves inside the coupling, there’s still nowhere where you’re going to get infiltration of soil or contaminants in between the walls of the pipe. It’s a very neat idea. We’ve finished the development and we’re just starting to market it and we have our first pipe producer who’s going to go with that Super Coupling.”

Lupke stresses that Corma does not manufacture pipe, itself, but only designs, builds, and sells the pipe making machines utilized by pipe extruder manufacturers. Today, Corma sells and services its machinery in over 100 markets, worldwide. It recently opened offices in El Salvador and Brazil to better support its customers in Central and South America, and the company has also made a strong commitment to its customers in India by establishing a Sales and Service Center in Mumbai.

It has also strengthened its position in Europe. “The three largest pipe producers in Europe are all our customers, now,” says Lupke, “and our German competition continues to weaken.” In addition, Lupke remarks that the competition from Chinese firms is also getting weaker. “The Chinese haven’t executed very well; they’ve lost momentum. Their equipment has gotten more expensive, thought the quality and service and after sales has not,” he says.

So, it seems that the last twelve months have been good ones for this well-known and well-respected family business, and after four decades, Manfred Lupke’s vision, creativity, and determination continues to be the driving force behind Corma’s ongoing commitment to its global vision: “To develop and produce superior pipe manufacturing equipment to pipe manufacturers; to provide excellent, ongoing service for what we sell; and to advance the pipe manufacturing industry with innovative engineering skill and technological achievement.”

Adding credence to the last part of that mission statement was Corma’s recent receipt of the Innovation in Production or Technological Advancement Award presented by the Vaughan Chamber of Commerce Business Achievement Awards – just another feather in the cap for a company that’s still going strong.

Check out this handpicked feature on S&N Communications. 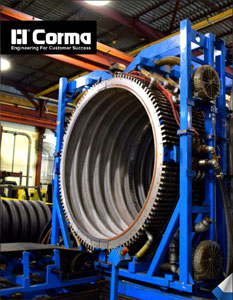