May 2018Past IssuesSupply Chain and Logistics

Business View Magazine interviews representatives from The Alexandria Transit Authority, as part of our focus on supply chains and transportation. 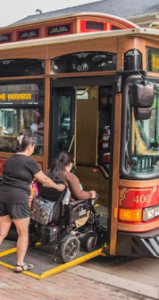 “DASH was formed in 1984 by the local officials, here, who recognized the need for public transportation services to provide connectivity to Washington, D.C.’s regional Metro system, which had opened in the late 1970s,” says ATC’s CEO and General Manager, Josh Baker. “We had 17 buses and 30 drivers,” adds Marketing and Communications Manager, Allyson Teevan.

“The organization, today, looks a lot different than it did then,” Baker continues, “but our mission remains the same – we subscribe to a model of customer safety and service as our priority. We operate a fleet of 85 transit buses; we service just shy of four million passengers, annually, and we have just shy of 200 employees. Our annual operating budget is approximately $17 million; of that, approximately $3.5 million is composed of fares paid by the rider. Other revenues include charters and grants and marketing programs. We are subsidized heavily by the locality, but our operating ratio is pretty strong, relative to other systems. We are known as one of the top transit systems in the country, and have repeatedly been recognized for our quality customer service, our reliability, and our on-time performance.”

Not content with those accolades, Baker says that ATC, in an effort to expand and enhance its already superior services, is currently getting to work on a “transit vision plan, which is a rethinking of how people in Alexandria move around and how we provide services to them.” He explains,  “The transit industry as a whole has seen a declining ridership base because of changes in the way that people live their lives and the way they move around – things such as telecommuting; shared ride services, such as Uber and Lyft; bike shares; and a more urban-centric workforce have really changed the demands for public transit, nationwide. So, we have been engaging our community in a number of ways to ensure that our services meet their needs and where we do, that’s great, and where we don’t, we try to work internally to understand how we might effectively provide those services.”

One way in which DASH has increased its system’s effectiveness was when it introduced its “Plan Ahead…Pay it Forward” campaign, in 2014. “It was a strategic move to try to reduce what’s called ‘dwell time’ at passenger stops – the amount of time that a bus is stationary, loading or unloading passengers, which affects its on-time performance and the satisfaction of the riders,” Baker says. The company spent a year researching the situation and found that significant dwell time was often caused by passengers adding value to their SmarTrip cards, after getting on the bus.

“There was a lot of downtime, where folks were adding value to their card,” says Teevan. “Some of our busiest routes at peak hours were experiencing up to 15-minute delays. We were receiving a lot of complaints from passengers and even bus operators.  So, what we did was we stopped allowing the adding of fares to SmarTrip cards on the bus.”

Teevan admits that the move was somewhat controversial and ATC expected a certain amount of resistance from riders who were used to the old system. With the implementation of “Plan Ahead…Pay it Forward,” passengers would only be able to adjust their SmarTrip accounts at a kiosk at a Metro station or online, but no longer at a bus’s fare box. “But, we moved forward with it and there was no negative output,” she recounts. “In fact, we received numerous comments within a month, saying ‘thank you’ because we were able to get folks to and from their destinations on time.”  “We did a massive marketing campaign to help make sure that the public was educated and aware,” Baker adds, “and the results were very positive. We increased our on-time performance, reduced our dwell time, and increased our customer satisfaction.”

This past fall, in an attempt to offer new and innovative 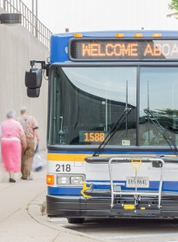 ways to bring more people onto its buses, DASH partnered with Alexandria City Public Schools (ACPS) and created the “Student Ride Free” initiative. “Our strategic partnership set up a program for all high schoolers in Alexandria to use our services free of charge,” Baker notes. “By showing their student I.D., they can ride anywhere at any time. That’s been an incredibly successful program that we’re very proud of.”

DASH’s bus fleet is composed of full-sized transit buses with a rated useful life of 12 years. “We pride ourselves in having a very well-maintained fleet with high reliability,” says Baker, “and we attempt to replace buses when they reach their 12-year mark. We anticipate that by the end of 2019, we will have completed our most recent round of fleet replacements in an endeavor to get all of our older style buses that are high polluters off the road, and reduce our carbon footprint.”

Several years ago, in an earlier replacement round, ATC began ordering hybrid electric/diesel transit buses. “A diesel engine paired with an electric drivetrain, much like a hybrid car,” Baker explains. “But we have found that the technology did not prove itself to be as efficient as we would have liked, and it resulted in increased costs of operations and maintenance, which have not been offset by the minor improvement in fuel economy. So, instead, we turned our focus to reducing our carbon footprint by purchasing nothing but clean, low-emitting diesels to replace the old diesels that don’t have any pollution controls.

Baker, who came on board as CEO in early 2017, believes that a lot of what the company has accomplished over the last few years, and what it intends to accomplish going forward, has been due to its corporate culture. “People want to work here because it’s a family-oriented environment,” he claims. “We see everyone as important. We’re not the highest-paying system in the region; we may not have the greatest benefits of anybody in the region; but what we do have is a dedicated workforce that believes in what we do. And much of what we do internally, from a management standpoint, in order to foster that, is spending time with the workforce to understand what is important to them and how we make sure management supports them.”

“We’ve created a culture where the employees feel that they have a voice and that they’re heard when they have concerns,” asserts Teevan. “Management does a very good job of motivating and appreciating employees. And they’re dedicated to DASH. And we are customer-focused. Everything we do, we do with the mindset of what is going to improve the ridership experience.”

The Alexandria Transit Company – Welcome Aboard.

Check out this handpicked feature on The America Bus Association – Serving the motor coach industry.

WHO: The Alexandria Transit Company